Home / Art / Luanda opens the exhibition ‘Cachimba’ at the Museum of Afro-Brazilian History and Culture – MUHCAB, in the river 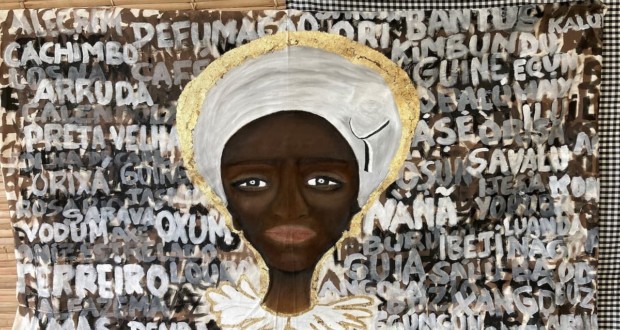 Artist from Rio Grande do Sul based in the capital of Rio de Janeiro surprises in a solo show that exhibits unpublished series, in which it incorporates art, African origin history and religiosity

The exhibition CACHIMBA, artist Luanda, was born from the need to expand the field of Afro literacy for a fusion of ideas from history with religiosity of African origin, that will culminate in the appreciation of Afro-Brazilian culture and history, as a whole, through the union of the sacred Pretos Velhos to the historical black personalities of Brazil during the African diaspora in the South Atlantic. The exhibition refers to the resignification of ancestry and reflections on religious intolerance and will be inaugurated on the day 09 July, Thursday, at Mercedes Batista Room of the Museum of Afro-Brazilian History and Culture, the MUHCAB (check details in “Service”).

The works were created after the end of the defense of the doctoral thesis in arts, “Kalunga mu kizua — The sea in time”, in September 2021, at the School of Fine Arts of the Federal University of Rio de Janeiro (EBA-UFRJ). The artist has been working on the theme — art and terreiro — for five years, since joining Umbanda, in 2017, as rolling (when the saint's son enters a mediumistic trance), after many invitations. Your artistic creation process, since he arrived to live in Rio de Janeiro, seven years ago, was transmuting and being gradually permeated by the sacred of African matrix. The work included elements of the Terreiro such as flowers, herbs, candles, chants, White clothes, crockery, mats, among other objects, while living in her Community of Terreiro, the artist began to turn (to incorporate) with the beings of the earth and the Orixás.

When did you realize, all his work was in full transformation; was the moment when he coined the term “Ateliê Terreiro” because his artistic practice was focused on the Culture of Terreiro. Among all Umbanda entities, it was with Pretas e Pretos Velhos that the artist began a significant dialogue about “artes da makumba” that lasts until today. It's Maria Conga, Cyprian father, grandma ana, Maria do Rosario and Father Benedict, with your precise lines, strong and warriors, that feed an important inspiration for the artist to think about the crossroads in the Atlantic, the Calundus and the entire African cultural resistance movement that took place throughout Brazil's colonization.

In this exhibition, Luanda brings Pretas and Pretos Velhos closer to historical characters of the Afro-Brazilian resistance in the struggles against racism: the lawyer Luiz Gama (1830-1882), for example is portrayed as Father Cyprian. By repeating this procedure on each of the portraits, Luanda marks important political position, by proposing the convergence between sacred entities and historical characters, bringing the sacred-political partnership as freedom struggles. 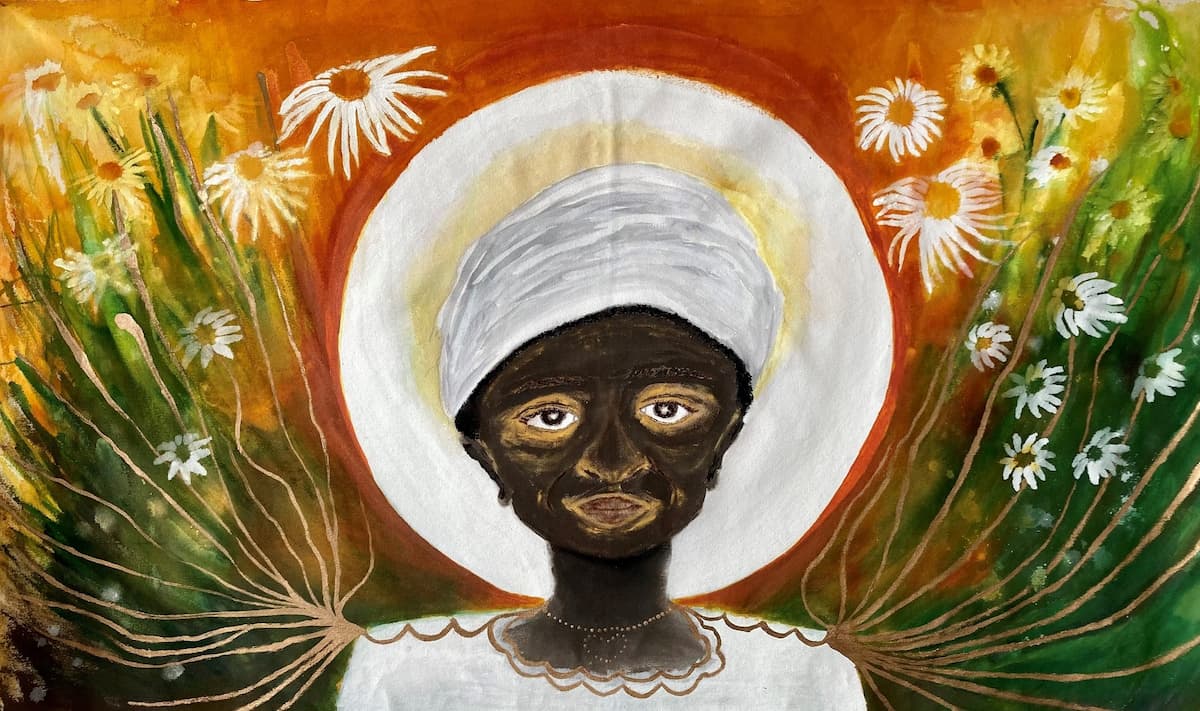 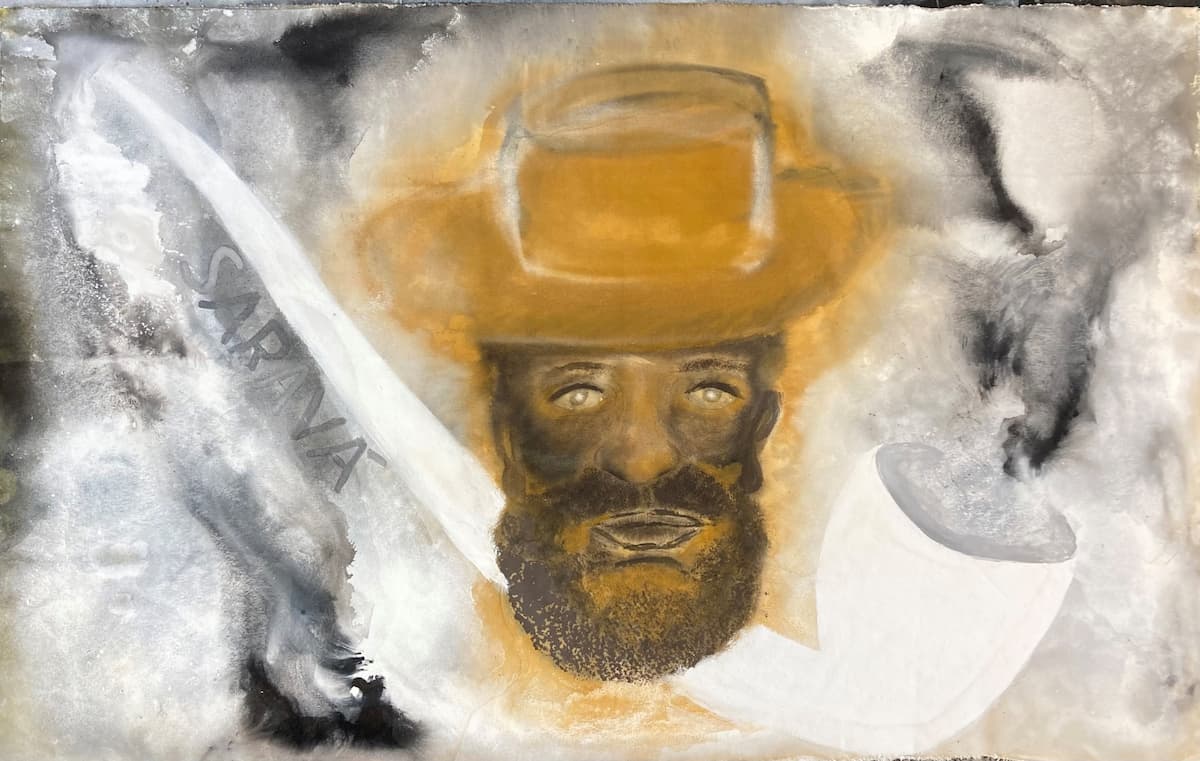 The exhibition – Blacks and Old Blacks

CACHIMBA is the first solo exhibition from Luanda in Rio de Janeiro. Two series recently developed by the artist are presented: “Freedom Stories and Guides”, consisting of a set of installation paintings and sculptures, e “Kalunga”, made up of large paintings.

The series “Freedom Stories and Guides”, held between 2020 and 2022, consists of five installation paintings and two sculptures, each of the sets occupying and activating the room in an installation way. The installation paintings are portraits that combine Old Blacks and Blacks and historical personalities on the same face., associating the sacred, the historical and the political. on the walls, cattail mats and fabrics help the positioning of the screens, expanding them beyond the frame; in front of and around each painting are placed benches made of Preto Velho and bowls with. "Like this, the spectator is involved in a process of contemplation in which the gaze is directed from the bottom up, giving corporeity to the experience of contact with the works”, observes Luanda.

In continuity, two sculptures occupying the center of the room bring the signs of the Pretos Velhos guide on a large scale: a pipe made of clay is enlarged to large proportions, functioning as an herbal smoker; around you, a rosary, with golden beads, is stretched out on the floor, circling the pipe. both pieces, one involving the other, have the intention of valuing/reflecting the work of the Pretos Velhos in the Terreiros, but, also broaden our view of the work of this ancestor of the earth.

will be displayed, yet, the painting “Fundo do Mar nº 5”, which is part of the series “Kalunga” (2018), made up of seven paintings. This series contextualizes the Atlantic crossing, leading the viewer to think of a hiatus that is, at the same time, the connection between america (Atlantic) and Africa.

A “Atelier Terreiro” – space of resistance

Part of a movement of a decolonial art, no “Atelier Terreiro”, the artist Luanda points to a contemporary art practice in close relationship with the ancestral Culture of Terreiro, bringing questions and concepts of Afro-Diasporic epistemology into contact with the language problems of contemporary art. After three years of dedication to his Ateliê Terreiro, decided to expand the debate that existed in his artistic production and began to curate to form a group in his Atelier composed of people of color, committed to Afro-Brazilian art, and anti-racists. The meetings started in 2019 and was expanded to other Brazilian cities in the South and Northeast, and has as profile, artists who are children of Terreiro and who exercise an anti-colonial cure.

The artist has at the Ateliê Terreiro platform, that surrounds your Atelier Terreiro, the Ateliê Terreiro Collective and events with guests, your life project, to expand its activism and cultural resistance in favor of the defense of Terreiros of African origin, of the anti-racist struggle and a nucleus of Afro-Brazilian art formed by artists who have a performativity that displaces elements of Terreiro Culture for their artistic practices. Ateliê Terreiro is located in the city of Rio de Janeiro, near Little Africa, next to Largo and Santa Rita Church, territory museum memory place (open air museum) Afro-Brazilian and Afro-Atlantic reference.

enter earth, territory and terreiro, the artist Luanda declares herself as a mixed-race cis woman who has her place of speech from the Terreiro de Umbanda of Bantu-Kongo matrix, where it produces ancestry and carries its ancestry in accordance with Bantu hospitality. Saravá!

Visitation: Thursdays, Fridays and Saturdays from 10 am to 5 pm