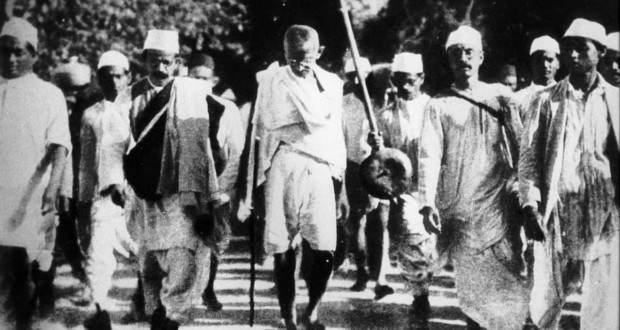 Museu de Arte Sacra de São Paulo – BUT / SP, institution of Department of Culture and Economy of the State of São Paulo Creative, in partnership with Consulate General of India in São Paulo and the Swami Vivekananda Cultural Centre, bring to the public in São Paulo the exhibition “MAHATMA" with 17 photographs displaying records of the life journey of Mahatma Gandhi covering some important events of your life. Curated by Puja Kaushik, the show occupies the exhibition space of the MAS/Metro Tiradentes Room and is part of the 75th anniversary celebrations of India's Independence. “Mahatma Gandhi's life reminds us of the power of truth, of peace and non-violence. As India celebrates the 75th year of its independence from colonial rule, this exhibition captures Gandhi's transformation from an ordinary person into a mass leader, who defeated the British Empire using simple methods of non-cooperation and civil disobedience. Mahatma's life continues to inspire people around the world. Gandhi's principles and ideals offer a practical solution to facing the challenges facing humanity.”, declara Amit Kumar Mishra, General Consul of India in São Paulo.

Mohandas Karamchand Gandhi is considered one of the spiritual leaders, the world's most revered social and political leader, leading India's independence movement, who adopted a unique philosophy of non-violent resistance, civil disobedience and non-cooperation for, not just achieve the end of British colonialism, but also to create social transformation. The main pillars of its philosophy are: to truth and the no violence. But the definition of these concepts goes beyond the meaning of the expressions. To Gandhi, ‘truth goes beyond simple veracity of words and actions, also including faith in the ultimate truth and a strong belief in morality.; while the no violence, it's not a mere absence of violence, but it means love for all living creatures’.

The images selected by the curator to compose the show, whose originals belong to the collection of National Gandhi Museum, New Delhi, India, reveal some events that had great importance in the trajectory of Mahatma Gandhi and gave rise to the most powerful weapon known to mankind – Satyagraha (non-aggression principle). Each photograph highlights an important milestone in Gandhi's life and journey.. 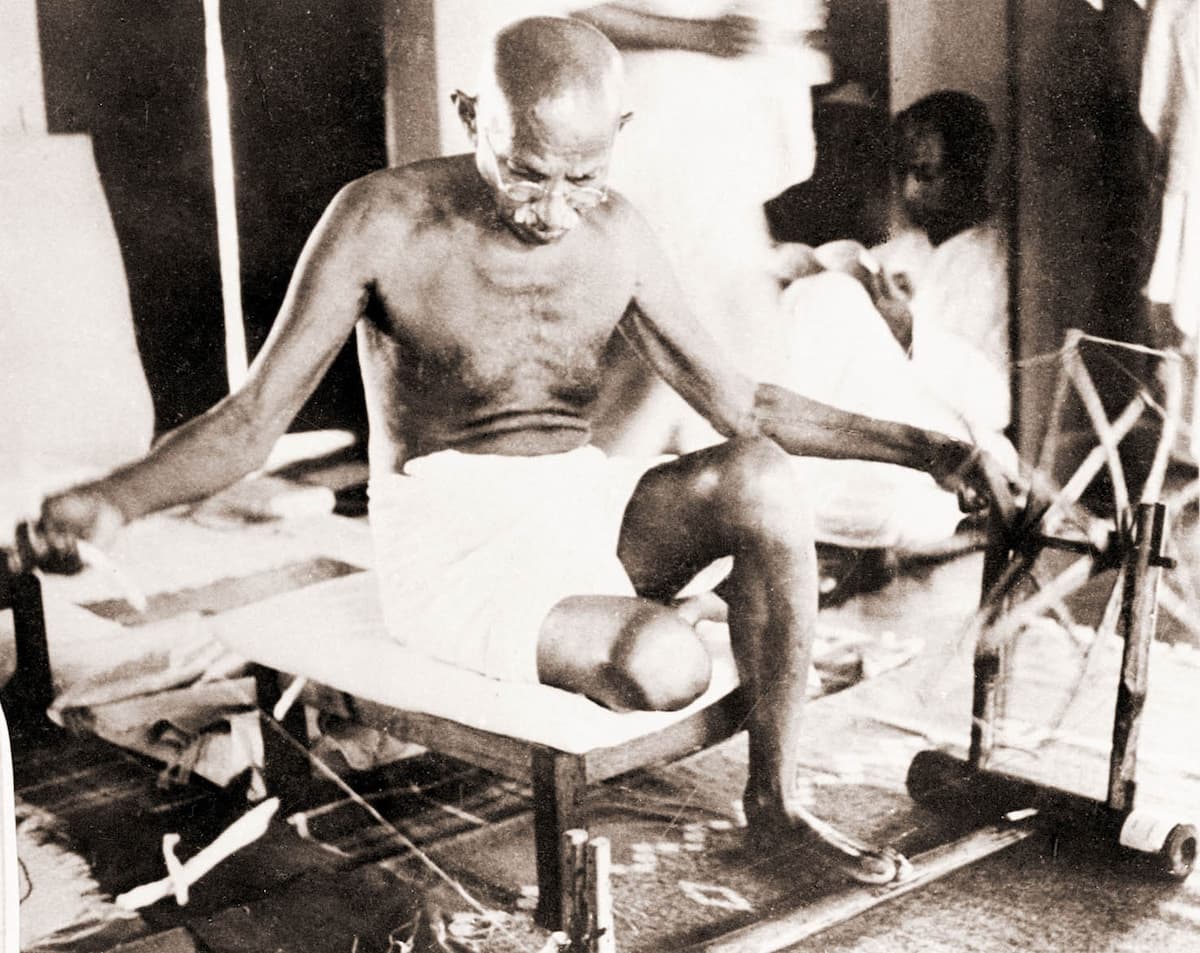 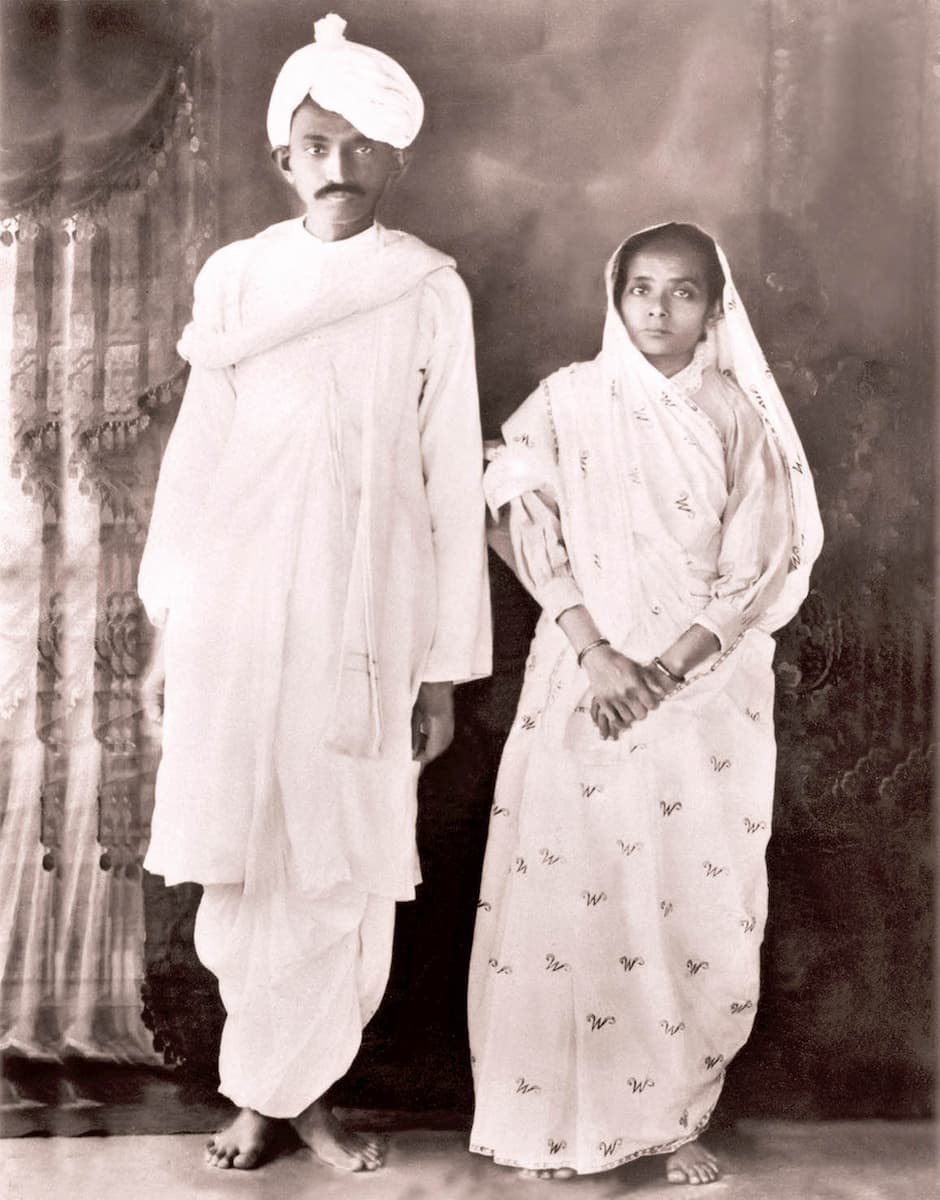 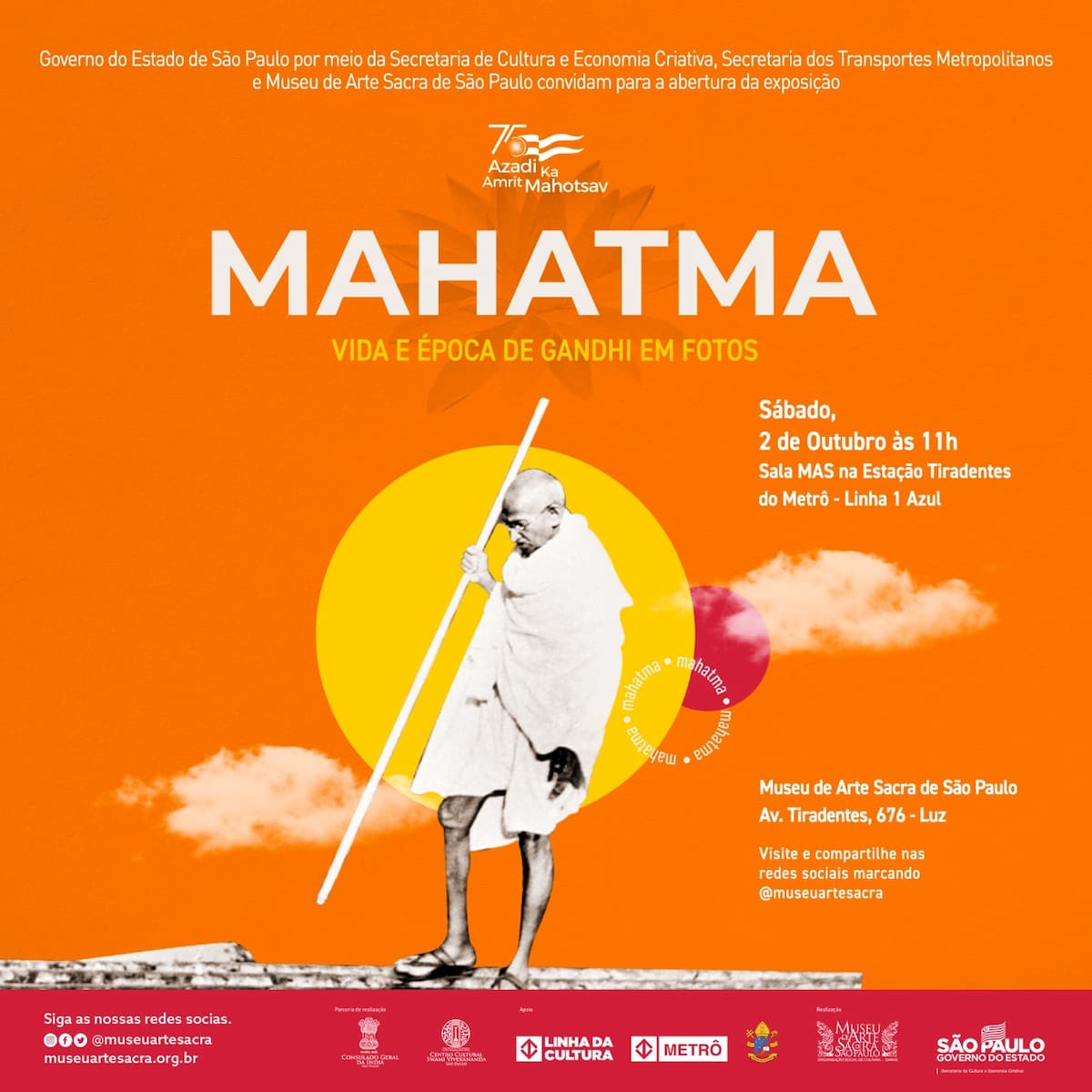 Exhibition “MAHATMA” at the Museum of Sacred Art of São Paulo – BUT / SP. Disclosure.

Curated by Puja Kaushik is aware of the need to contextualize the theme and, as additional information, added items that act as a complement to the assimilation of history and its importance to Western society. A bronze sculpture of Mahatma Gandhi, Bihari Das, renowned indian artist; one Charkha – swivel wheel – which was the physical personification and symbol of the constructive program of Gandhi; seals, with a philately cutout, with worldwide coverage, issued in memory of Mahatma Gandhi, as well as some important publications, to the editor of the Athena Palace, that helps explain the role that Gandhi and his teachings already play in Brazil to promote non-violence.

In the current moment where the planet is undergoing adaptations and changes that further highlight all the problems such as social injustice, economic inequality, corruption and poverty, the theme “MAHATMA” is of great importance to highlight efforts that must be made for the common good and the work necessary for people to reconnect with the teachings and philosophy of Gandhi. "I believe that the ideology of Gandhi – ‘Be the change you want to see’ – It is of great importance. Today, we all talk about the problems of society or people around us, but we hardly do anything about it. It is important that, first, let's make the change in our circle and then, only then, the world will change" explains the curator.

“‘MAHATMA’, not only does it give the audience a glimpse of the landmark events in Gandhi's life, but it also shares the journey of an ordinary man becoming the ‘Mahatma’.” Puja Kaushik

Bachelor of History from New Delhi University and Master of Museology from National Museum Institute, New Delhi, has been actively working in the field of artistic administration, cultural and institutional in the last 20 years. Developed, thanks to your academic background, an appreciation of the relevance of art in society. A plural experience for working with various institutions, like museums, auction house, art galleries and university education, helped her develop a broad and privileged vision and great knowledge in the segment. Having studied and worked at the National Museum, New Delhi by 7 years, developed practical experience with creation, curation and exhibition concept. Her work assignments gave her ample opportunities to interact with various segments in the art field., including artists, art collectors, academics and art connoisseurs not just in India, but also abroad. Currently, directs the Swami Vivekananda Cultural Center, the cultural wing of the Consulate General of India in São Paulo and is working to promote Indian culture and build cultural ties between India and Brazil.