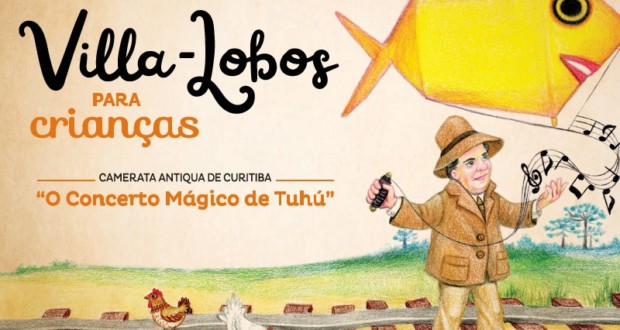 To celebrate Children's Day, more than 50 dance artists, music and theater come together in the Teatro Positivo stage, day 12 October, for Villa-Lobos concert for Children. The show teaches about the world of classical music from the story of the boy Tuhu, the little Heitor Villa-Lobos that, non-magical world, meet new friends and live a fantastic adventure - all to the sound of his compositions performed by the Camerata Antiqua de Curitiba.

The concert is part of the Feeding with Music, Camerata's teaching program since 1993 It fulfills the mission to awaken in children the interest in classical music. This year the concert is held in partnership with the Knowledge Program Lines, the Municipal Education; and the project Classics Positive, which reinforces the position of the Positive Group as promoter of culture and art in Paraná, Its main bias the incentive to classical music.

No list, actress Regina Vogue heads a team of excellence, Renet formed by Lyon and Amanda Leal, eight professional dancers that guide and illustrate the history and all the Camerata Antiqua group, which it operates and presents classical music in a fun and exciting way, under the stage direction of Maurice Vogue and musical direction and regency of Mara Campos.

"The extent that this show has is amazing. It comprises all forms of art. In addition to the musicians, dancers and actors on stage, much use audiovisual and a wonderful material with artist. Also all, icing on the cake is to know the story of a Brazilian composer as significant ", says Maurício Vogue.

musical clouds, train cars, giants and fairies batons come into play to present didactically works of the Brazilian songbook through research and inspiration in folklore and extensive work of Heitor Villa-Lobos. The child popular compositions relate to traditional topics such as “The Carnation fought with the rose”, “Falls-Falls Balloon”, “Sapo Jururu”, among others.

"The cultural and educational greatness is the most representative. The knowledge is presented in a playful way. It is a nice teaching that interacts with the new languages ​​", concludes the scenic Director. Tickets cost R $ 30 and R $ 15 and are on sale at Disk Tickets.

The concert is a presentation on 10 October, in two sessions, for 2,5 thousand students 69 schools Municipal Education Network, between 4 and 12 years and coming from 29 city ​​neighborhoods, coming to cover all areas of Curitiba.

"This important program developed by Camerata, It brings a spectacle of magic and enchantment for children, through a musical theater children will have the opportunity to be sensitized by art ", said Ana Cristina de Castro, President of the Curitiba Cultural Foundation.

The number of children served by the program is constantly growing. "Since 2017, Feeding the program with music is gaining greater range, mainly due to the strengthening of the city's art education programs. Thanks to the partnership between Camerata Antiqua of Curitiba and Grupo Positivo, the program won an increase of 72% in schools served resulting in double assistance to students ", Marino says Galvão Jr., executive director of the Curitiba Institute of Art and Culture.

The music content with the show's theme was previously worked in classrooms through Knowledge Program Lines.

The Feeding with Music, performed by the Camerata Antiqua de Curitiba, annually presents a series of educational concerts elaborate on a specific topic and produced scenically, even with the presence of guest artists. Since the establishment, in 1993, the program is aimed at school children and youth, education professionals and community Curitiba.