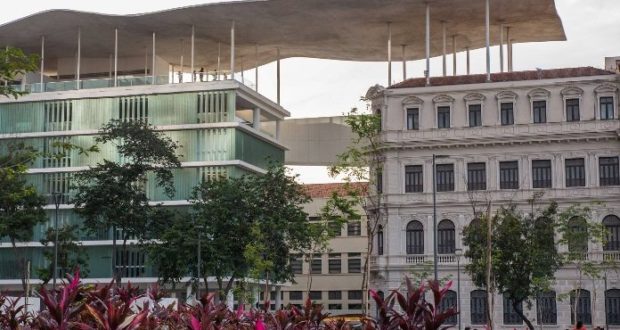 Promoted by the Rio Art Museum, Seminar Series Women in the Arts reaches its last module

The third stage of the online event, which has as its theme “Architecture and urbanism", will address the relationships between city, class and violence

In progress since 04 September, the second edition of Seminar Series Women in the Arts reaches its last module in November. The event, not done channel of the Rio Art Museum on YouTube, happens in the days 06 and 20 November and grants a certificate of attendance to everyone who participates in the live streams or who later watches the videos on the digital platform. In this final step, the seminar will discuss the relations between city, class and violence, with the participation of architects Luciana Mayrink, Margareth da Silva Pereira, Patrícia Oliveira and Vilma Patrícia, from architecture student Lais Marques, and anthropologist Barbara Copque.

The second edition of the Women in Arts Seminar Cycle has the theme “Architecture and Urbanism”, which is also the central subject of the exhibition “Casa Carioca”, open to the public for scheduled visitation in September. Among the guests who have already participated in the event this year are names such as the architect and curator of the exhibition held by MAR, Joice Berth, and anthropologist and curator Sandra Benites. With the proposal to give visibility to female cultural production, as well as generally stimulating research and development of projects created by women, the cycle also aims to continue the process that generates the “Women in the MAR Collection” exhibition (2018), deepening discussions and practices in favor of gender equality, through the prism of intersectionality within the scope of the institution's activities and collections.

Entirely taught by women, the cycle was divided into three modules: City, ethnicity and ancestry; City, body and gender; and City, class and violence. Each module consists of two monthly lectures, that have simultaneous translation into the Brazilian Sign Language (Pounds). The panels of the first two modules are available to the public, in full, no Youtube.

Barbara Copque – Post-doctorate in Anthropology, Barbara Copque has been interested in photography since she was a child, using their records in studies on institutional violence. Participates in the Negras collective[Photos]spellings and has already published books, articles, conducted photo essays, ethnographic videos and several individual and collective exhibitions. She is currently an adjunct professor at UERJ and coordinates the Center for Visual Studies in Urban Peripheries, also participating in the Afrovisualidades group, both at FEBF / UERJ.

Margareth da Silva Pereira – Graduated in Architecture at UFRJ and Urbanism at IFU (France); PhD in History from EHESS (France); and has a specialization course in History of Art and Architecture at PUC-Rio and in Urban Sociology at IEDES (France). She is a full professor at UFRJ, where he works in the Graduate Program in Urbanism (Prourb), and level researcher 1 from CNPq. Acted as a guest teacher at several educational institutions in Brazil and abroad, like the Universidad Nacional de Colombia, o Institute of Urbanism of the University of Paris XII, the Institut Français d’Urbanisme of the Université de Paris VIII and the Ecole des Hautes Etudes en Sciences Sociales. She is the author and organizer of books, articles and exhibition curator. His works mobilize art, social sciences and history, to interrogate the historiographical dimension, starting with memory and remembrance regimes, architectural and urban knowledge, and the cultural and constructed forms of cities in their relations with politicians and citizenship.

Lais Brands – Graduated in Architecture and Urbanism at Universidade Santa Úrsula and Interior Designer at Universidade Veiga de Almeida. Interested in woman themes, violence and city since 2018, when it provoked the academic study of a sensorial and synesthetic exposure with the intention of denouncing violence against women. Works in the field of Interior Architecture.

Patrícia Oliveira – She is an architect and urban planner graduated from UNISUAM and a stained glass restorer, certified by Oficina Escola / Fiocruz. A resident of the Manguinhos favela for 40 years, Patrícia has as main goal to execute an architectural project with 20m² called Casa da Lala, which consists of a mixed-use building. The purpose of this project is to activate autonomies in Lala's personal and professional development, transvestite and her childhood friend. The Favelada Architect, how to proudly call yourself, actively participates in the Mothers of Manguinhos and WSF movements, who fight against the violation of rights, by JUSTICE, REPARATION and MEMORY of the many murdered by the armed wing of the State.

Luciana Mayrink – She is an architect and urban planner at FAU-UFRJ, Master in Architecture by PROARQ-UFRJ, and studies Policy and Urban Planning at IPPUR-UFR. Works at BR Cidades Núcleo RJ and is a member of the Terra Preta Collective.