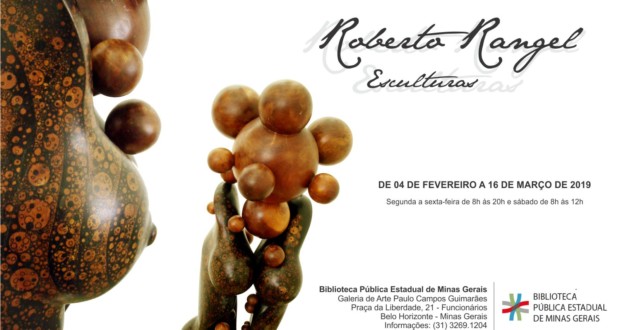 From 04 of the February 16 March, the State Public Library of Minas Gerais

Belo Horizonte will receive, in February and March 2019, the Sculpture Exhibition Roberto Rangel, It consists of a collection of about 30 sculptures, produced in woods, marble, soap stone and bronze, with measurements of 25 cm a 2 meters of height. The exhibition will be held in Galeria de Arte Paulo Campos Guimarães, the State Public Library of Minas Gerais, in Liberty Square. Part of the collection can be visited in Braille Library Sector, where they can be seen and felt by touch. The exhibition provides an aesthetic appreciation of the collection for blind people, or have low vision.

Currently, Rangel said phase in a cosmic, in which investigates the great questions of the human being: where it came from and where it goes. The artist's work is a lyrical sculpture, poetics, which reveals the expansion of human consciousness, his evolutionism, forms via slender, castings, Completed by miriades spheres, which may be cells or universes. Present in these images, man, that evolve from essence to cosmic reason. "Pure lyricism, Sculptural pure poetry. "

Autodidact (self taught), Roberto Rangel began to draw to 8 years doing bins faces profiles. At sixteen, He decided to form the drawings through sculpture. in Count, where then lived, He received artistic guidance of sculptor Pedro Miranda and began to carve in wood and soapstone. From there he began a career that spanned nearly 50 years, no interruptions, dedicated exclusively to art, using woods, soap stone, marble, bronze, styrofoam, concrete, PVC and other materials. The work of Roberto Rangel crossed the borders of Brazil and is at least in Germany, United States, France, Italy, Portugal and Switzerland. In Brazil, has been in the collection of several galleries in Minas Gerais, in Rio de Janeiro, in São Paulo and the Federal District. The artist also produced the great sculptures of the scene of the Opera AIDA, presented in 2002, in the Palace of Arts, in Belo Horizonte. Has 3 great monuments in Minas Gerais, It is the Christ in Good Order, India Cowgirl in Spider district, Brumadinho, and the Cosmic India at the Museum Jeca Tatu, in Itabirito. The artist also has vast hit sacred work, distributed in various churches of Minas Gerais.