The Rio Art Museum - MAR opens on 13 April the exhibition "Rosana Paulino: The sewing of Memory ". After successful season at the Pinacoteca, in São Paulo, the largest single artist ever held in Brazil comes to town with 140 works produced over its 25 year career. Signed by Valeria Piccoli and Pedro Nery, Trustees of the São Paulo Museum, the exhibition brings together sculptures, facilities, engravings, drawings and other media, that show the search artist in coping with social issues, highlighting the place of black women in Brazilian society.

Rosana Paulino appears on the art scene in the years 1990 and distinguished, from the beginning of your practice, as the only voice of his own generation. Selected works, conducted between 1993 and 2018, show that their production has addressed situations resulting from racism and the stigma left by slavery that surround the condition of black women in Brazilian society, and the various types of violence suffered by this population.

One of the highlights of the show is the "Wall of Memory". Performed when the artist was still a student, the installation comprises 11 Paulino family photographs that are repeated throughout the panel, forming a set of 1.500 parts. Photos are distributed in "amulets" formats - small parts used as protective amulets for religions of African origin. The wall turns into a poetic denunciation of the invisibility of black men and women who are not perceived as individuals. When the 1.500 pairs of eyes are set on the wall, "Facing" people, they cease to be ignored.

The exhibition also has a playful series of drawings by Rosana Paulino, in which the artist reveals his fascination with science and, in particular, the idea of ​​living in eternal transformation. The cycles of life of an insect are made and compared with the changes in the female body, for example. The weavers installation (2003), composed of about 100 pieces in stoneware, terracota, cotton and thread, It leads to the three-dimensional space the theme of transformation of life explored in the drawings.

In some of his works the science and art relationship is highlighted, as in Settlement (2013). The series depicts pictures in real size of a slave made by Ausgust Sthal for Thayer expedition, led by scientist Louis Agassiz, which aimed to show the superiority of the white race to the other. for Paulino, "The figure that should be a representation of racial degeneration to which the country was under, according to the racist theories of the time, becomes the founding figure of a country, Brazilian culture. This reversal care ", ends at artist. 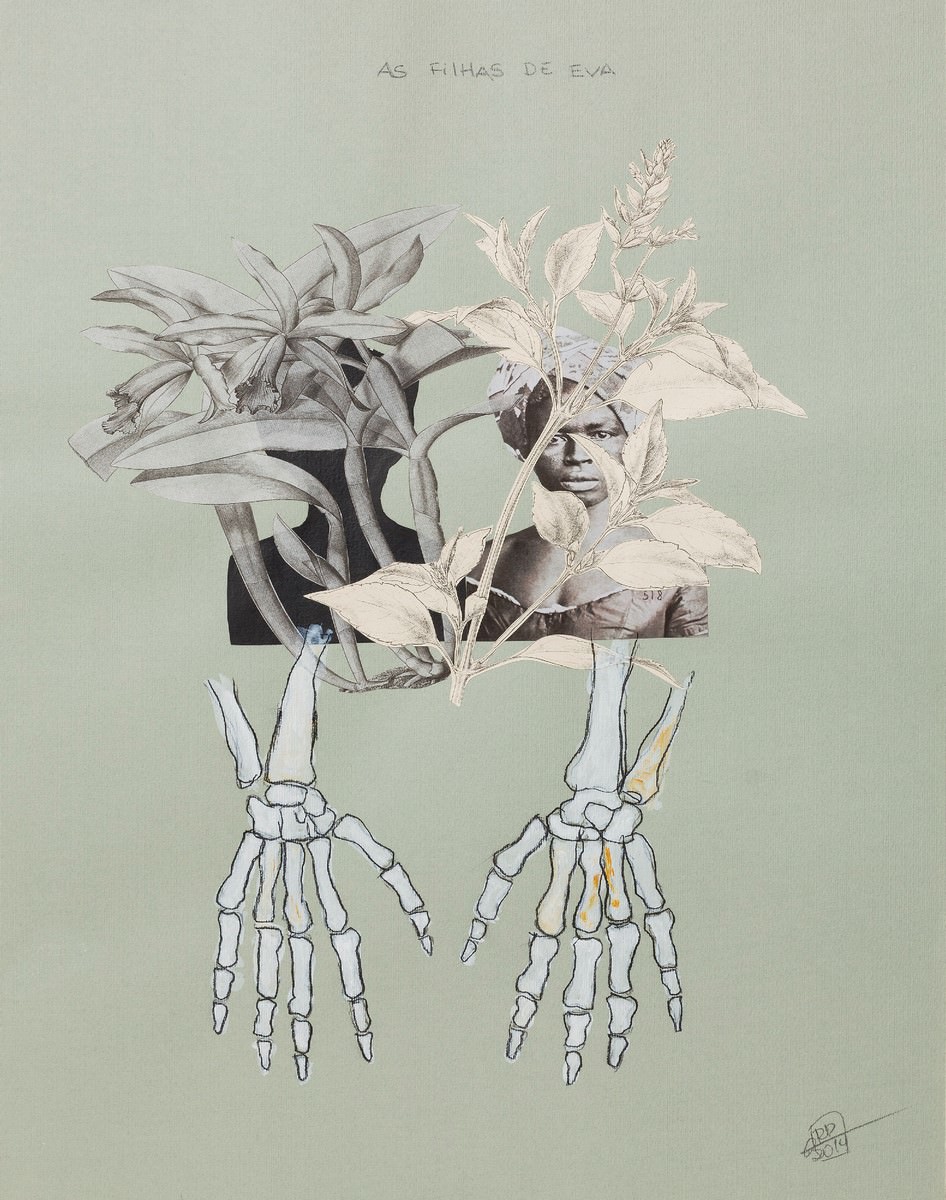 The daughters of Eve, 2014, Collage, Conté pencil and acrylic on paper. Photo: Disclosure.

PhD in visual arts from the Escola de Comunicações e Artes - ECA / USP, It specializes in engraving by London Print Studio, London and BA in the etching ACE / USP. It was a fellow of the Ford Foundation scholarship program in the years 2006 to 2008 and CAPES of 2008 to 2011. In 2014 He was awarded the scholarship for residency at the Bellagio Center, the Rockefeller Foundation, Bellagio, Italy.

As an artist has stood out for its production linked to social issues, ethnic and gender. His works have mainly focused on black women's position in Brazilian society and the various types of violence suffered by this population due to the racism and the marks left by slavery.

The sea is managed by the Odeon, a social organization of culture, selected by the Rio de Janeiro City Hall for public notice. The museum has the Globe Group as maintainer, the Equinor as master sponsor and Rede D'Or St. Louis as a supporter of exhibitions through the Federal Law on Cultural Incentives.