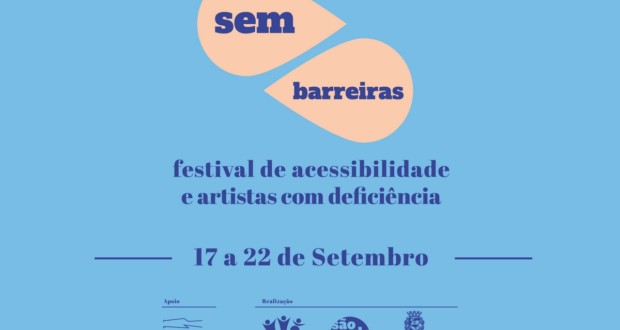 "No barriers - Accessibility and Festival Artists with Disabilities". Disclosure.

Festival has the support of various cultural institutions of the city

A Prefecture of São Paulo, through Municipal Culture (SMC) and Staff with Disabilities (SMPED), and support of the institutions of Cultural Paulista (Casa das Rosas, IMS, Itaú Cultural, Japan House, MASP, SESC and SESI) and other city institutions, created the "No barriers - Accessibility and Festival Artists with Disabilities", to be held from 17 to 22 September, in various parts of the city.

"The corridor Cultural Paulista is the best scenario to begin the No Barriers Festival. The Paulista always anticipated the society discussions and São Paulo citizenship. The Paulista is a place of culture, of art, mobility, accessibility ", says Eduardo Saron, director of Itaú Cultural.

Part of the integrated cultural calendar, a Agendão, program São Paulo Capital of Culture, the Municipal Secretariat of Culture, The Festival was born from the experience with the Inclusive Culture Program, which aims to promote communication accessibility in theaters and municipal culture equipment, offering, as well as architectural accessibility, Pounds resources, audio description and subtitles for citizens with disabilities. The idea is to publicize the important work done by artists with disabilities, bringing recognition and visibility for each, is the theater, in music, dance or any other cultural event. Through culture, deficiency can be seen and understood in another way, enhancing the potential of each person.

"Today the leaders of the cultural agenda of the city do not disclose accessibility in their schedules. The insertion of symbols in the dissemination of accessible events will facilitate the lives of people with disabilities who seek this information. We want to draw the attention of the press, talking about missing that makes use of communication symbols. We know that many of the city's cultural institutions already bring affordable schedules and this has to be clear in the cultural guides and road maps ", says Cid Torquato, Municipal Secretary of People with Disabilities.

In this first edition of the Festival, we have over 100 attractions: circus, storytelling, dance, debates, exhibitions, interventions, music, workshops, lectures, tours, performances, poetry, teatro e visitas monitoradas. In addition to the institutions of the Cultural Paulista, we count on the participation of others as: APAA, Bike Tour SP, Centro Cultural Banco do Brasil, Cia Theater Within Eyes, Instituto Tomie Ohtake, MIS, Football Museum, Sala São Paulo, Santa Marcelina Culture, SP School of Theater and Tom Brazil. All of them already make affordable spectacles and many have disabled artists. We will also have the support of the site Applause Brazil, first site in the country back to the theater.

"The experience we had in the last edition of Virada Cultural, He made clear the importance of accessibility in the event, in addition to its disclosure. Were 23 stage and 71 affordable shows with translation Pounds, and the large participation of people with disabilities ", declares Ale Youssef, Municipal Secretary of Culture.

On the accessibility symbols Comunicacional:

With the success of Inclusive Culture, the City of São Paulo starts to disclose the symbols of audio description, Pounds and Closed Caption in the cultural programming of the city. The initiative is an incentive for other public and private facilities, plus tours and cultural guides, also present in their services the symbols of communication accessibility, reaching the audience of people with hearing and visual impairment. All symbols are available for download from the site SMPED.

Previous: "The Brazilian People's Art" – 300 works signed by artists from around the country
Next: Miriam Nigri Schreier exposure, the Pinacoteca Benedito Calixto, is extended until visitation 29 September