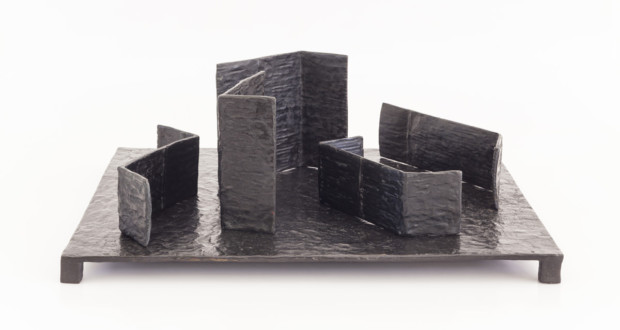 Galeria Marcelo Guarnieri is pleased to present, between 22 May and 26 June 2021, “Continuum”, second solo exhibition by artist Flávia Ribeiro at the gallery's headquarters in São Paulo. The show, curated by Henrique Xavier, will gather works in sculpture, drawing and photography produced 2014 and 2021. For more than forty years, Ribeiro has been examining the plastic and symbolic possibilities of matter, building a universe of forms and compositions that he revisits frequently. Your objects always seem to be in transit, jumping from the third to the second dimension, or from the second to the third. They assume multiple forms of existence, being cardboard and paraffin to soon be bronze, or be gouache and then be velvet. Can be articulated in modules as loose parts, which allows them to have infinite combinations and can also hang from support points fixed on the wall. The exhibition incorporates this metamorphic spirit and is organized around the desire to provoke new readings to the works produced in different periods through the spatial relationships created between them.

To Room 1 receives only two works: the photography “Double Figured” and the sculpture “Home”, both produced in 2014. The image of welcoming in this first environment is directed to an idea of ​​introspection, so much for the image of a body, that appears from the back in the photographic image, how much of the object you hold in your hands, a piece very similar to the sculpture itself “Home”, still without dividers. The house and the body, two architectures that configure a shelter, seem impersonal when devoid of a face or furniture, but even though they are evasive in a fixed sense, such works invite a relationship, allowing the viewer to fill that absence.

The double existence of the bronze piece as an object and as an image already announces similar operations that will be repeated throughout the exhibition: transitions between media that cause apparitions and disappearances. This is the case of “Body”, velvet and bronze piece leaning against the wall of the second room that, although it has the same dimensions and silhouette of “Double Figured”, no longer reveals an image beyond the absolute black patina on the bronze surface. Between drawing and sculpture, there is an interest in the variation of scales, both of which can fit in the hands, as one that surpasses the dimension of the human body. No three-dimensional field, it is possible to think about this relationship from the model, since the artist uses it as a practical and poetic tool. Practice at the time of setting up the exhibition, because its reduced scale allows it to scale the exhibition space and visualize the relationships between the works, poetic when its project function is subverted, acquiring autonomy as a sculptural object, as in “At home” and “Mountaineers”. 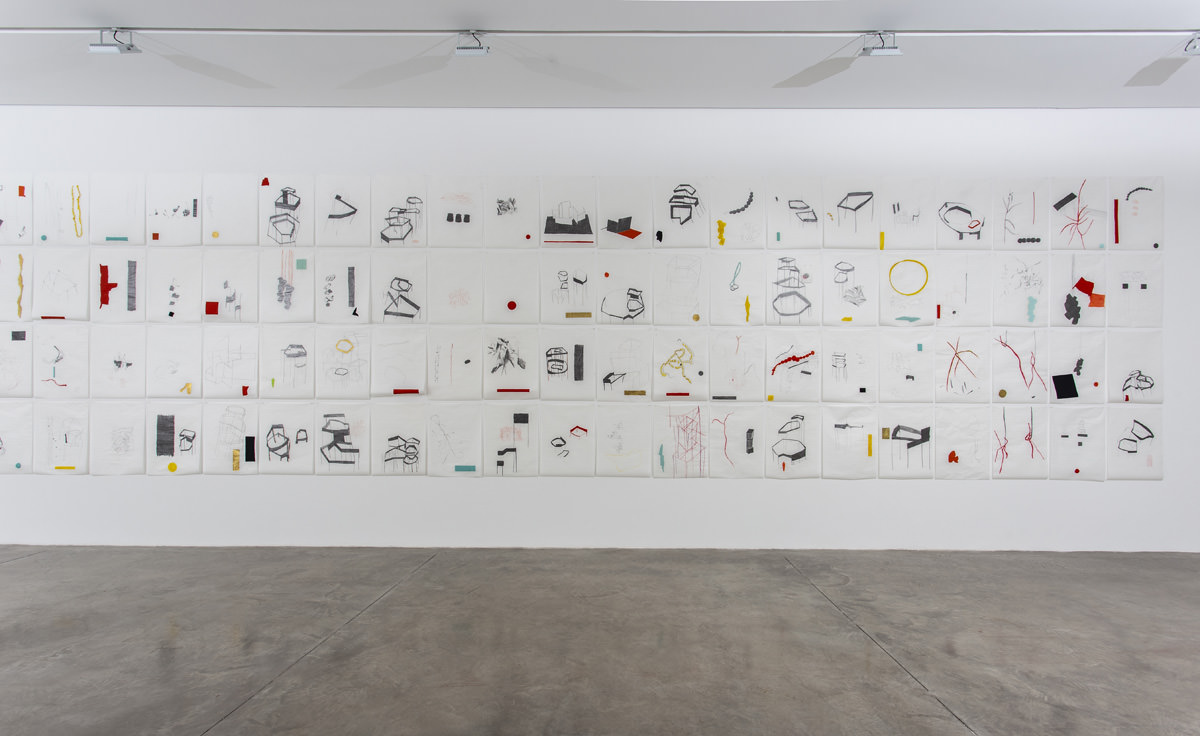 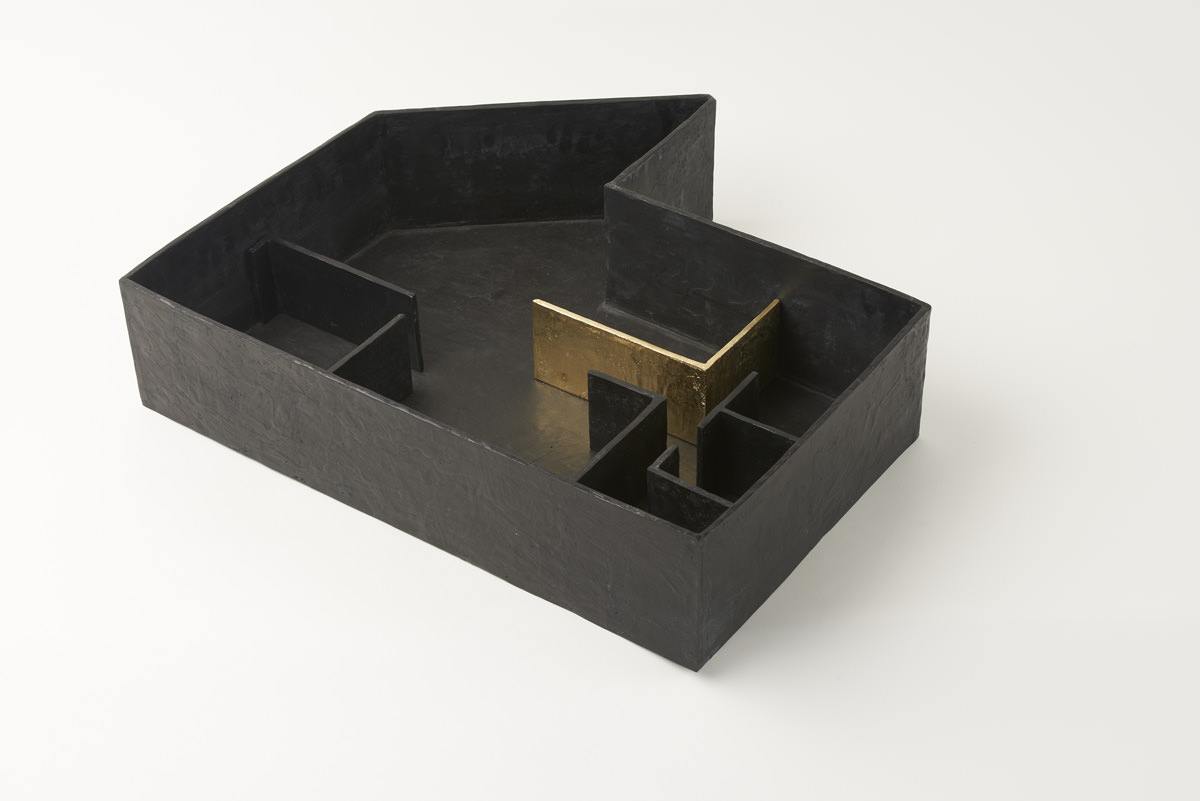 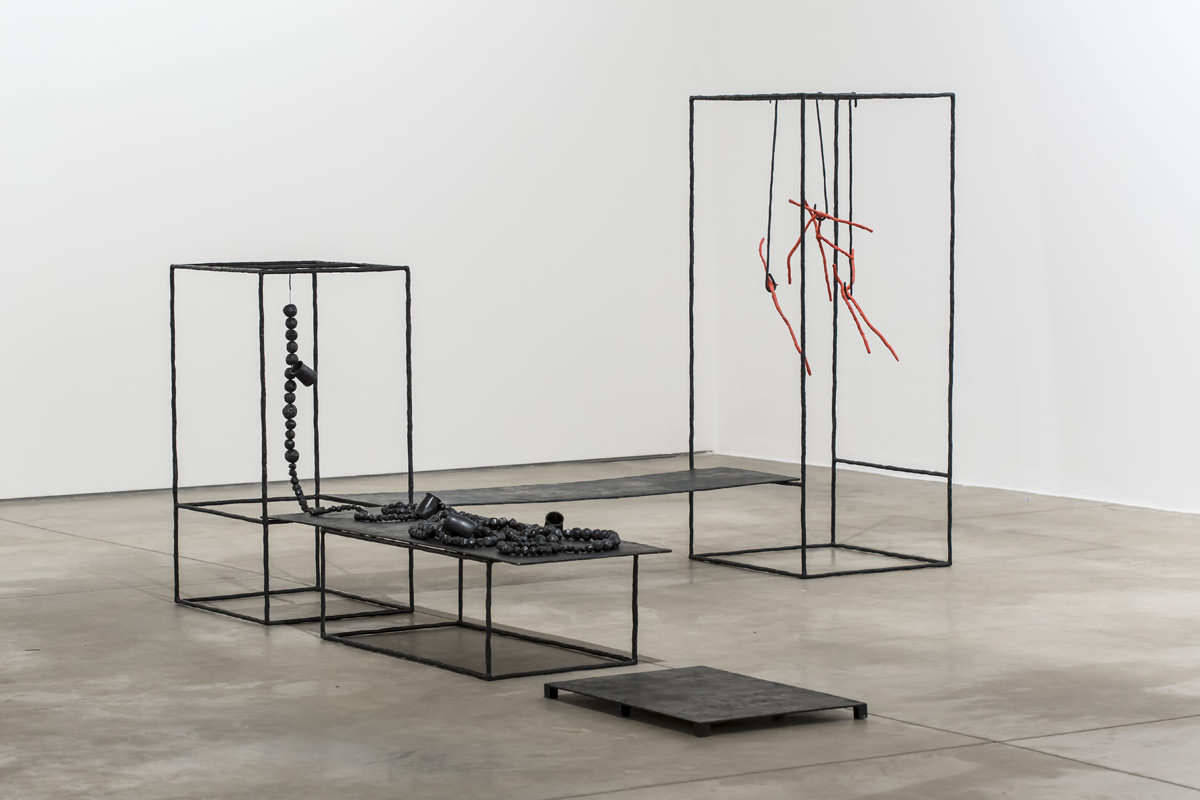 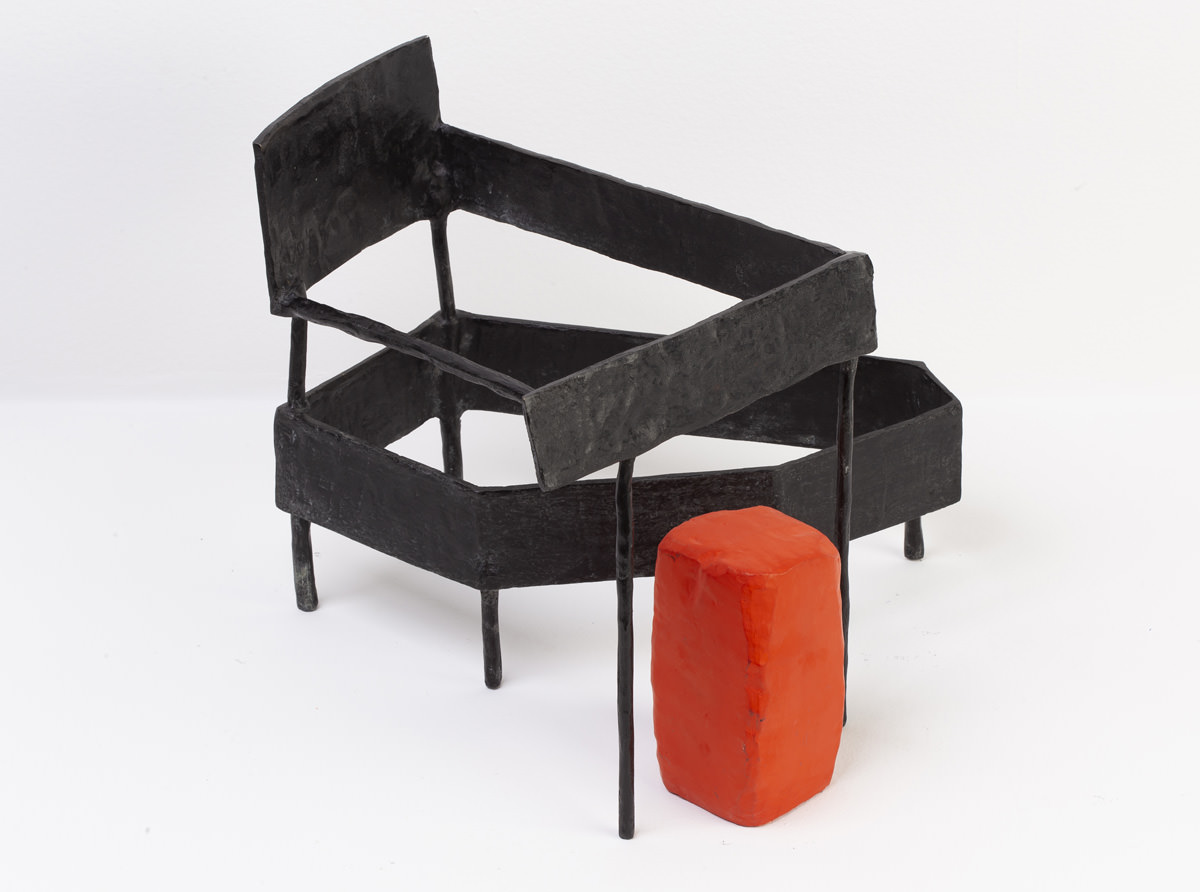 To Room 2 is the one who receives, beyond “Mountaineers”, other works that explore the ambiguities of the small format, such as “Minimum stocks” and “Field to think I”. The first is a series of objects made with wooden stumps, dry branches of ipe and stones that the artist found during the two months of confinement she spent in a farm, last year. The second is composed of a paraffin plate where structures that graphically refer to some of his works rest, formed by wire, copper wire, silk organza, thorns, seeds and tin. Both share a bench and resemble small architectures, being the result of a self-reflective and creative process, given its referential and serial character. Still in the same room will be presented nine drawings on parchment paper, sketch paper and felt produced between 2016 and 2021 that are also configured as fields for thinking. Due to its translucency, the sketch paper allows the artist to work with overlays and rearrangements, alluding immediately to the idea of ​​the outline, of what is in the process of being elaborated and therefore liable to change.

From the years 2000 Flávia Ribeiro explores bronze as work material, but it was during the last eight years that he devoted most attention to him, producing some of the pieces that are part of the exhibition and that gain greater prominence in the third and last room. The monumental and hierarchical connotations historically attributed to this material are disturbed through formal approximations that the artist establishes between her castings and the irregular structures and surfaces of organic materials, like kindling and seeds. In constant dialogue with the tradition of modern art, which has the visual structure of the grid as one of its great emblems, the artist does not fully adhere to the silence or autonomy that were associated with this constructive scheme, incorporating organic matter in their work not only formally or materially, but also conceptually, from its ephemeral condition that supposes movement and transformation, never immobility. 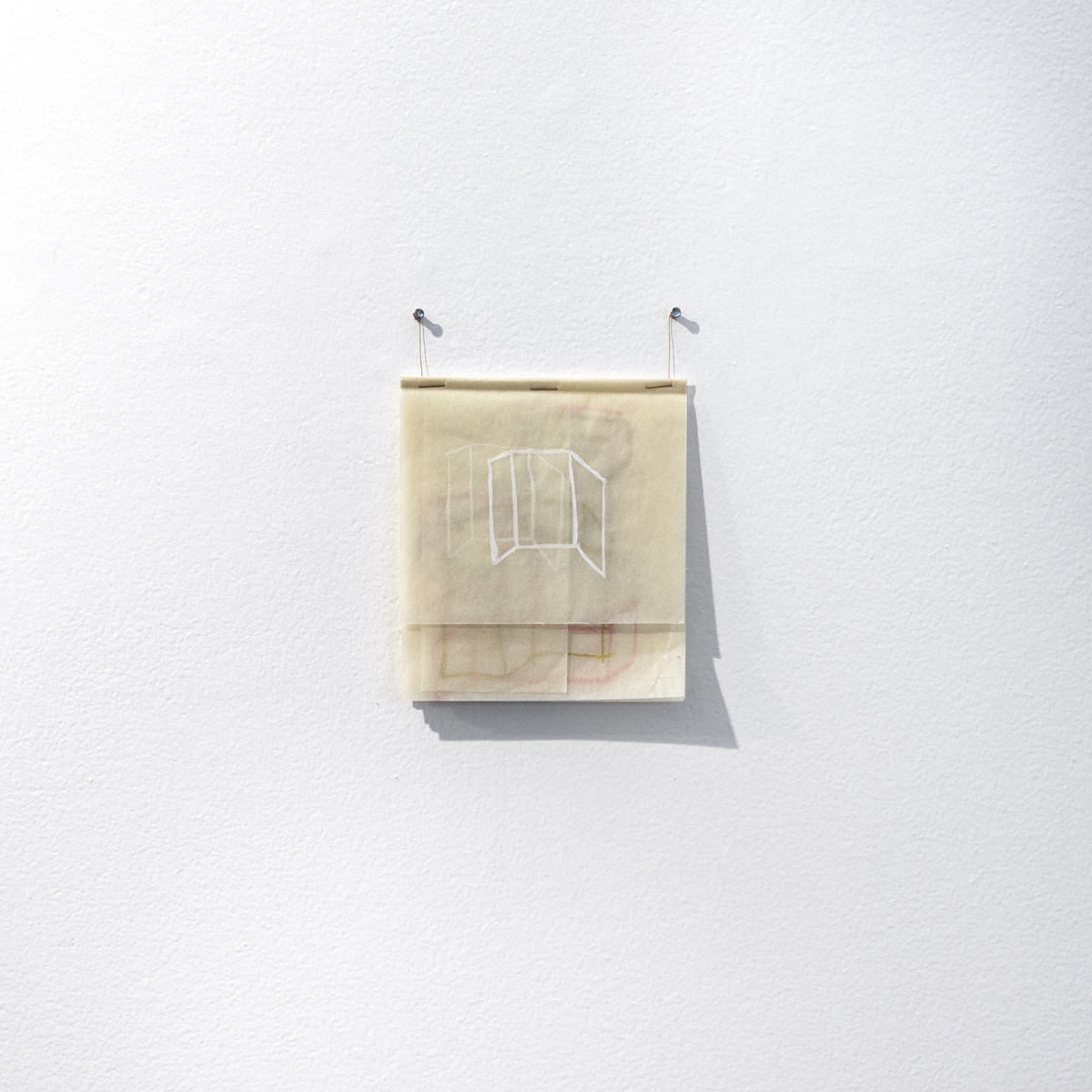 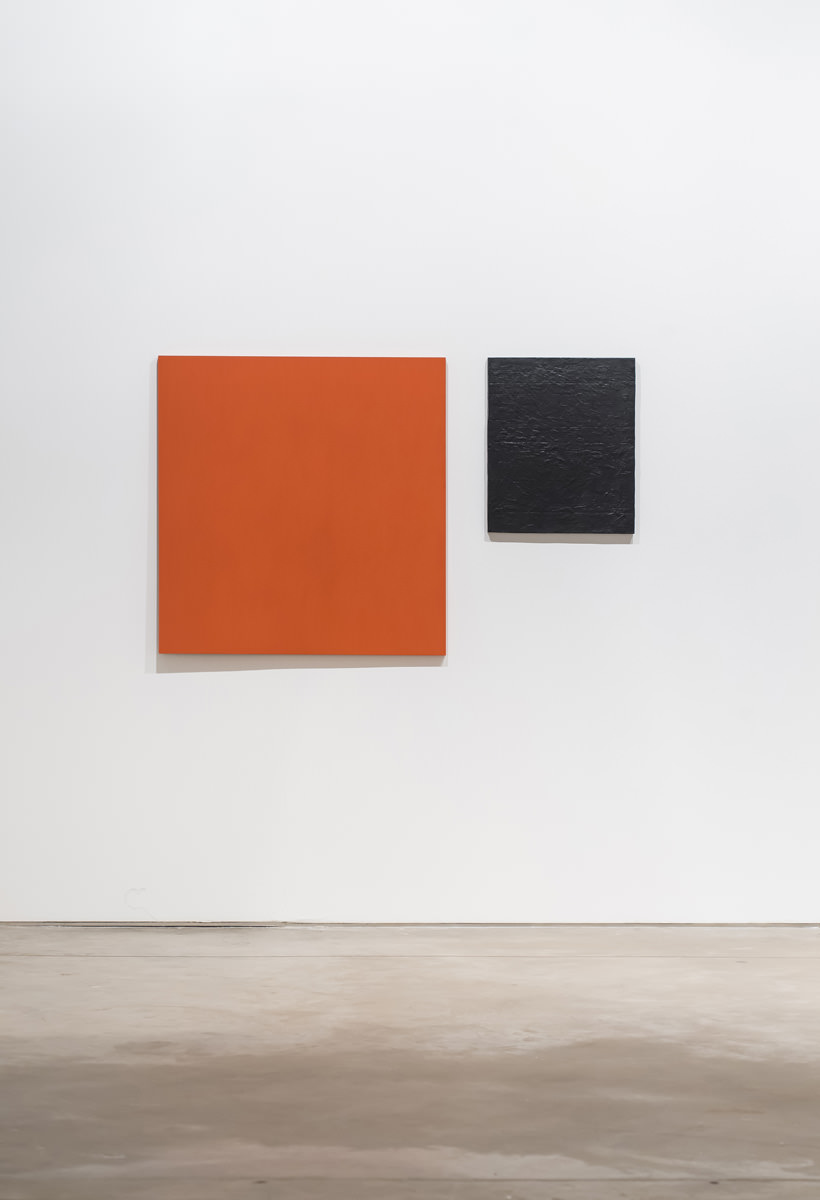 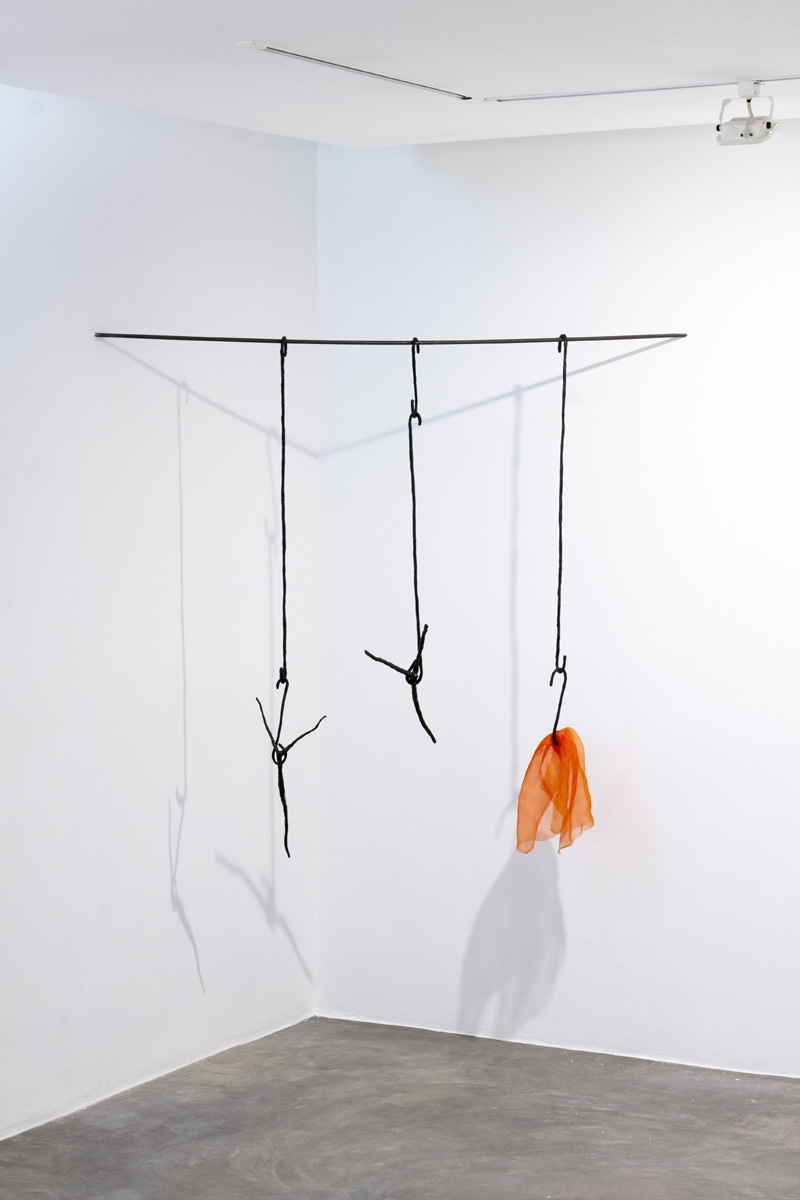 To Room 3 gathers, in addition to bronze and tin parts produced this year 2021, other bronze pieces of a more installative character produced between 2016 and 2018 and “99 drawings”, a set of drawings produced between 2017 and 2019 that make reference to other of his sculptures and that occupies the whole of one of the walls of the room. The simultaneity of times caused by the encounter of all these works in the Sala 3 can be materialized in “Things with time”, metal engraving printed from a matrix produced in the decade of 1980 and that has been reworked since last year. The process consisted of intervening with water paint on the matrix recorded in different shades of black and in grid format, alluding to the idea of ​​imprisoning the previous image, and after printing the engraving, work on paper with Ecoline ink in colors like gold yellow, the red and the blue.

For everyone's safety and better control of space, we recommend that you schedule your visit. We ask that you send us an email (info@galeriamarceloguarnieri.com.br)

with your full name indicating the day and time of your choice. The visitation can be carried out from Monday to Friday from 10 am to 7 pm and Saturday from 10 am to 5 pm, respecting all recommendations of health authorities, like wearing masks and social detachment. 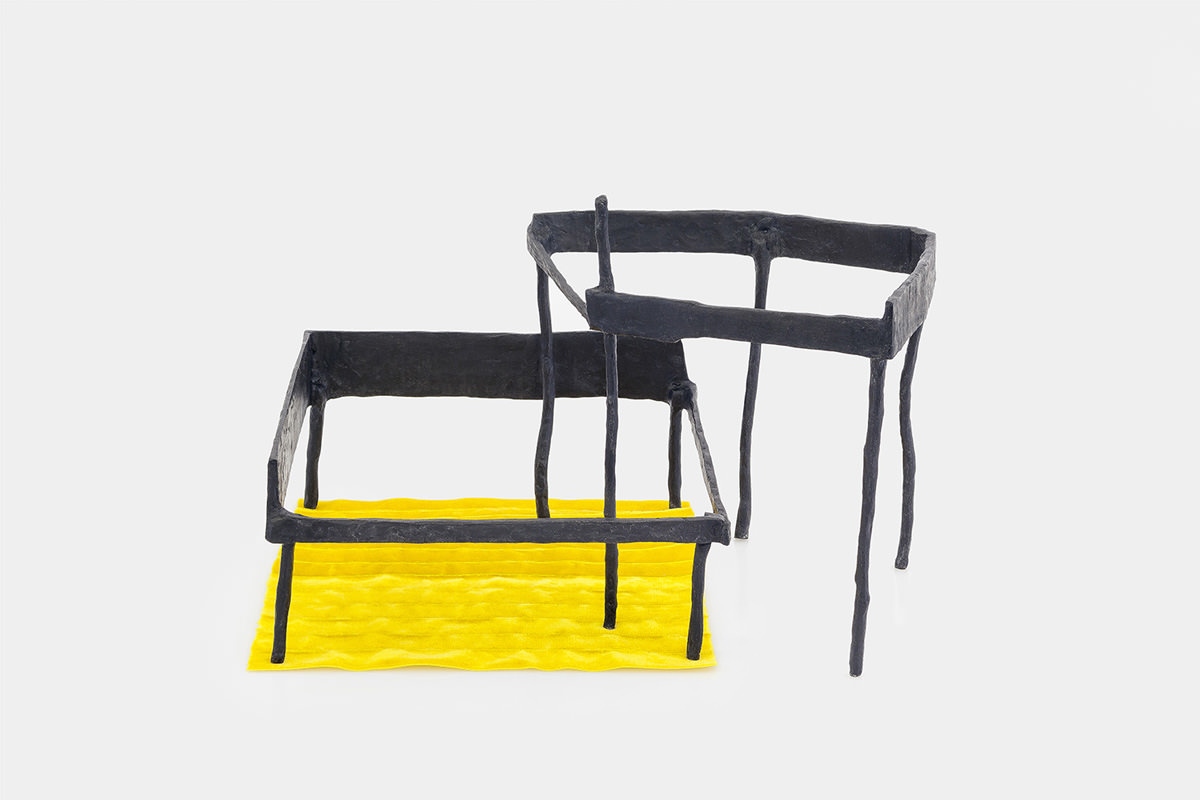 Flávia Ribeiro was born in São Paulo in 1954, where he lives and works. Attended Escola Brasil, in the early 1970, where she was a student of Carlos Fajardo, José Resende, Frederico Nasser and Luiz Paulo Baravelli. In 1978, moved to London, where he attended the printmaking course at the Slade School of Fine Art. Later, in 1996, moved back to London with the support of the Vitae Foundation and the British Council.

Previous: Machuty - “Reasons to transcend the boundaries of visual arts”
Next: #Momentum: TikTok exhibits for the first time a marathon of lives from museums around the world