Praise beautiful things, receive them cheerfully in the spirit, to turn them into food, and thus become noble and good (…) welcome it with tenderness and recognizes it as a relative, the better the more you’ll have been prepared for this by education. (PLATO, 2004, p. 95)

Ancient Greece enchanted in the field of Mythology, with your Gods; in the domains of Literature with the Epic poems Iliad and Odyssey; and witn the Philosophy, with thinkers, such as, Plato (428 – 347 b.C.). For the philosopher of Ancient Greek, the Beautiful is in nature, which should be considered as a model in symmetry, proportion and colors. Such a judgment left an evident impression of his rapture about the world around him. For the writer, the Beautiful causes us so much enchantment; refers to the simple and the true, it would be linked to a representation of the world of ideas and even to an educational sense. This concept of beauty was imprinted in the Art of Ancient Greece, in the form of Architecture, Sculpture and Painting.

Taking a journey through time, from Antiquity, we can reach Mannerism, as a style that of a transition between the Renaissance and the Baroque, and had as the greatest representative, an artist from Greece. Doménikos Theotokópoulos (1541 – 1614), better known as El Greco, was born in the place where El Greco Museum 1, 2 (Figures 2, 3 and 4) in the city of Fodele 3, in Crete. Opposite the museum there Byzantine Chapel Agia Panagia 4, an 11th Century, where El Greco must have come into contact with Art for the first time. According to historians, the painter himself stated, in 1606, that the place where he was born was surrounded by sources of drinking water, orange trees and a Byzantine Church.

Located one kilometer from the city center, the Museum houses documents (Fig. 6), copies of works associated with the artist (Figures 7, 8 and 9) and replicas of his paintings. The visitor can still find information about his life in Greece and the room that may have been his painting studio (Figures 13, 14 and 15). In ruins, the building was restored in 1982, by the Greek Ministry of Culture and opened to the public in 1998. The place is currently open to visitors and hosts artistic events and exhibitions. 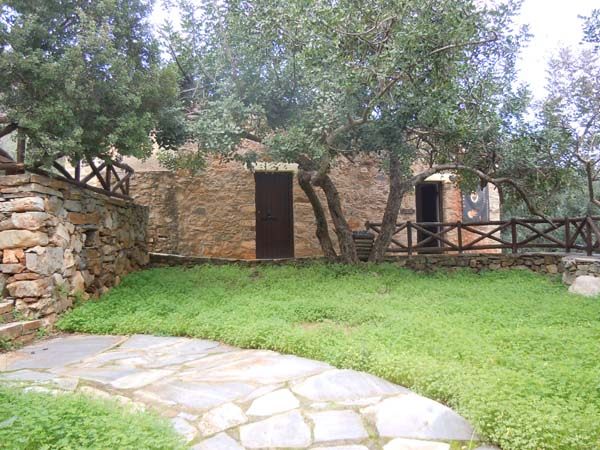 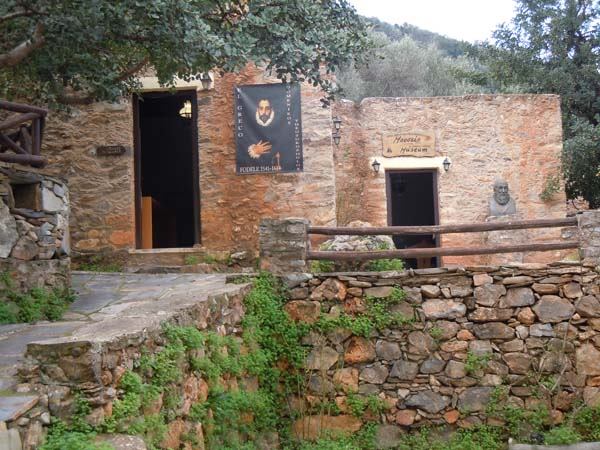 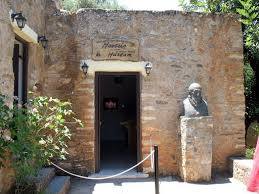 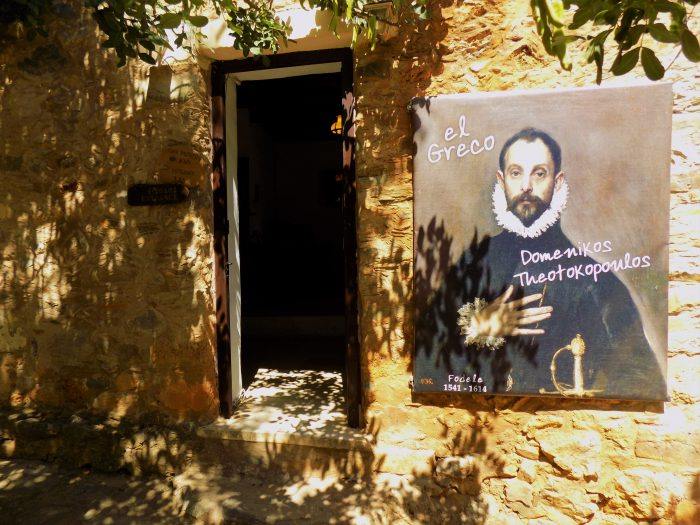 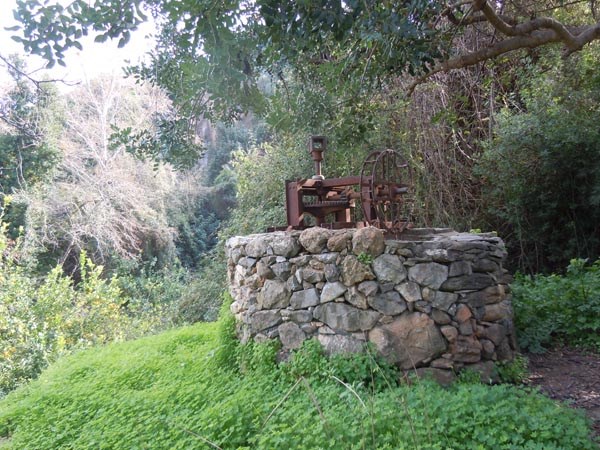 Figure 5 – View of the Museum.

The bold and brilliant Art of El Greco has traveled for centuries and reverberates today. His unique and unmistakable style made him the main representative of Mannerism and served as an inspiration to modern artists like Picasso (1881 – 1973). It may be that a discreet tone of voices whispered in the ear of the great painters, challenging their minds when describing celestial or umbratic portraits.

And it is very likely that such whispers weave a small scene, a tiny fragment or just a probable element of divine space that only the free soul can embrace. Skilled hands guide the tool that takes the tones and features to what was once only a whisper in secret. On the white canvas, the vigorous brushstrokes slide and the colors break the white space, like a germinating seed, like nature building, with roots and leaves spreading. Exhausted, the artist looks at the panel and checks whether it agrees with the initial murmur he heard.

It is quite possible that this is the process of those who create Art, in its various forms of manifestation. So it was with El Greco. His statement can be the same as many that convert the whispers he once heard into images or scenes. And the spectacle that emerges from a rumbling, then comes out loud and echoes through History, making a fuss and dragging styles, scenes, names and thoughts.

The artist's controversial personality was very close to his painting style, which did not follow the standards nor the painters of his time, figuring between the end of the Renaissance and before the Baroque, but not inserting himself in any of these models.

Born of a prosperous family, El Greco studied at the School of Arts in Crete and specialized in Byzantine Art; he also studied Greece History; he was a painter, an architect and a sculptor. The city of Candia, as it was formerly called at that time, the place where he was born, was famous for its artists and Schools of Art, which led El Greco to have interest and to pursue his career. Some historians believe that in his early twenties the artist was already working in his own studio. 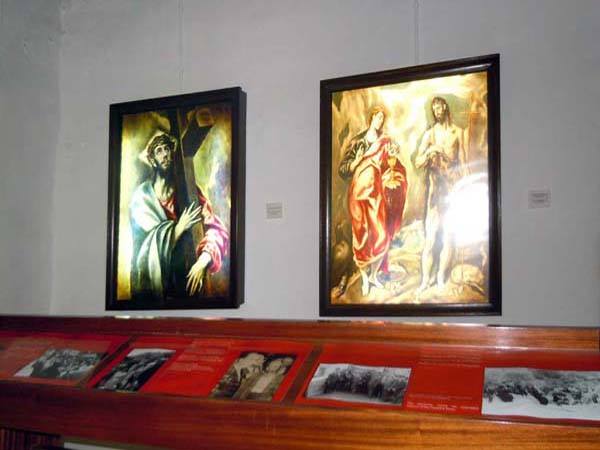 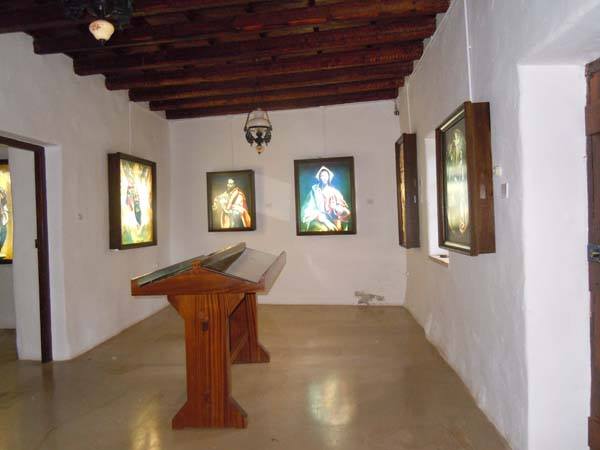 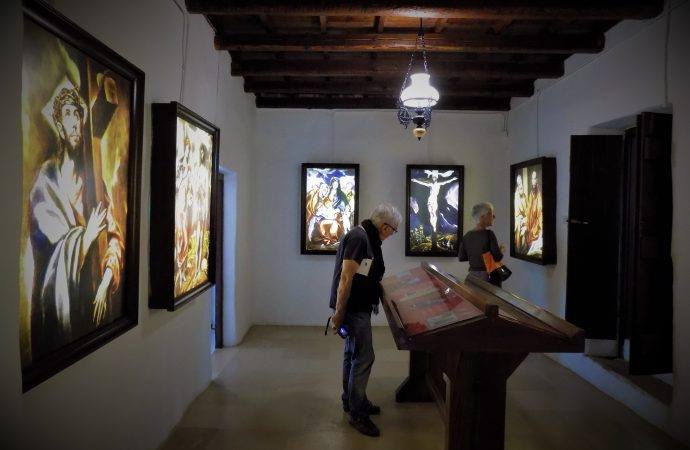 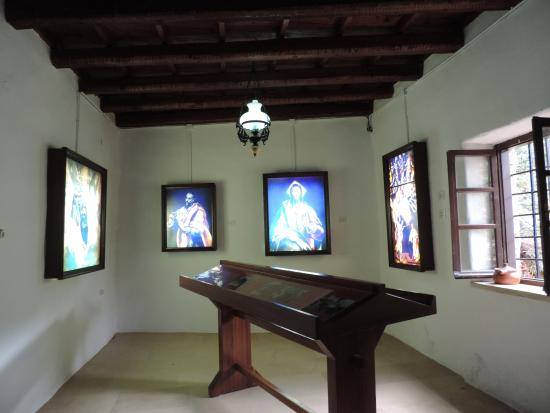 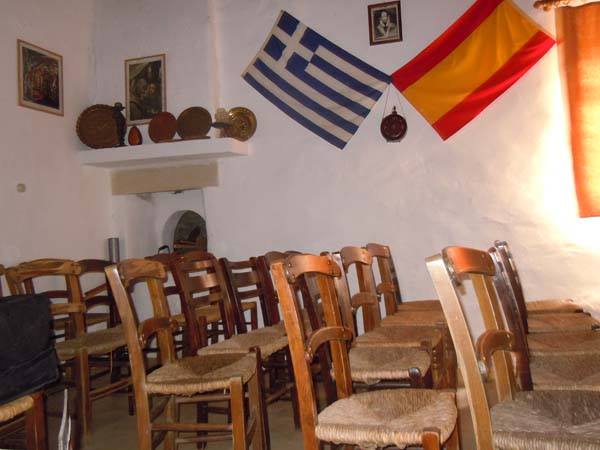 At the age of 26 El Greco moved to Venice and worked in Titian's studio (1490 – 1576), as his pupil. In 1570 he moved to Rome where he found more artists and new inspirations for his work and, although he did not follow conventional standards, El Greco showed some influence of the styles of Tintoretto (1518 – 1594) and Titian. Due to the criticisms he made of several artists in Rome, including Michelangelo (1475 – 1574), El Greco ended up winning enemies. The most important phase of the artist's career was from 1577, when he arrived in Spain and met Diego de Castilla (1510 – 1584), who guided him to go to Toledo to make paintings in the Church of Santo Domingo el Antiquo, which made him famous in the city. No long after, King Philip II (1527 – 1598) ordered two paintings from the artist to the court. El Greco became well known around the 1580 until the end of the Century and the most sought-after artist for painting well-known churches and religious sites. After a period of difficulties due to the non-payment of his works, he managed to live comfortably painting and studying until the end of his life, at the age of 72 years.

It is certainly for this reason (…) that music education is the main part of education, because rhythm and harmony has the great power to penetrate the soul and touch it strongly, taking grace with them and courting it, when you were well educated. And also because the young person to whom it is given as befits feels very imperfection (PLATO, 2004, p. 95)

Passionate about music, El Greco has employed many musicians for years, to play for him. Fruit of his relationship with Doña Jeronima de Las Cuevas, with whom there is no confirmation if you were married, your only child, Jorge Manuel also became a painter. 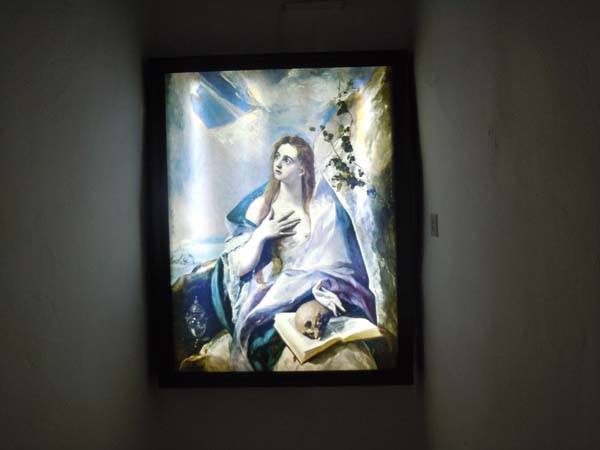 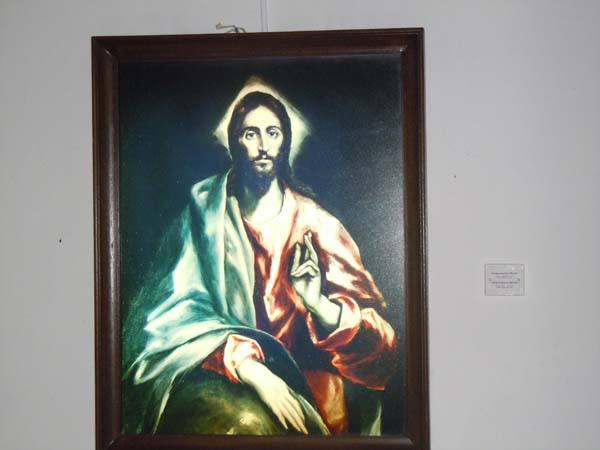 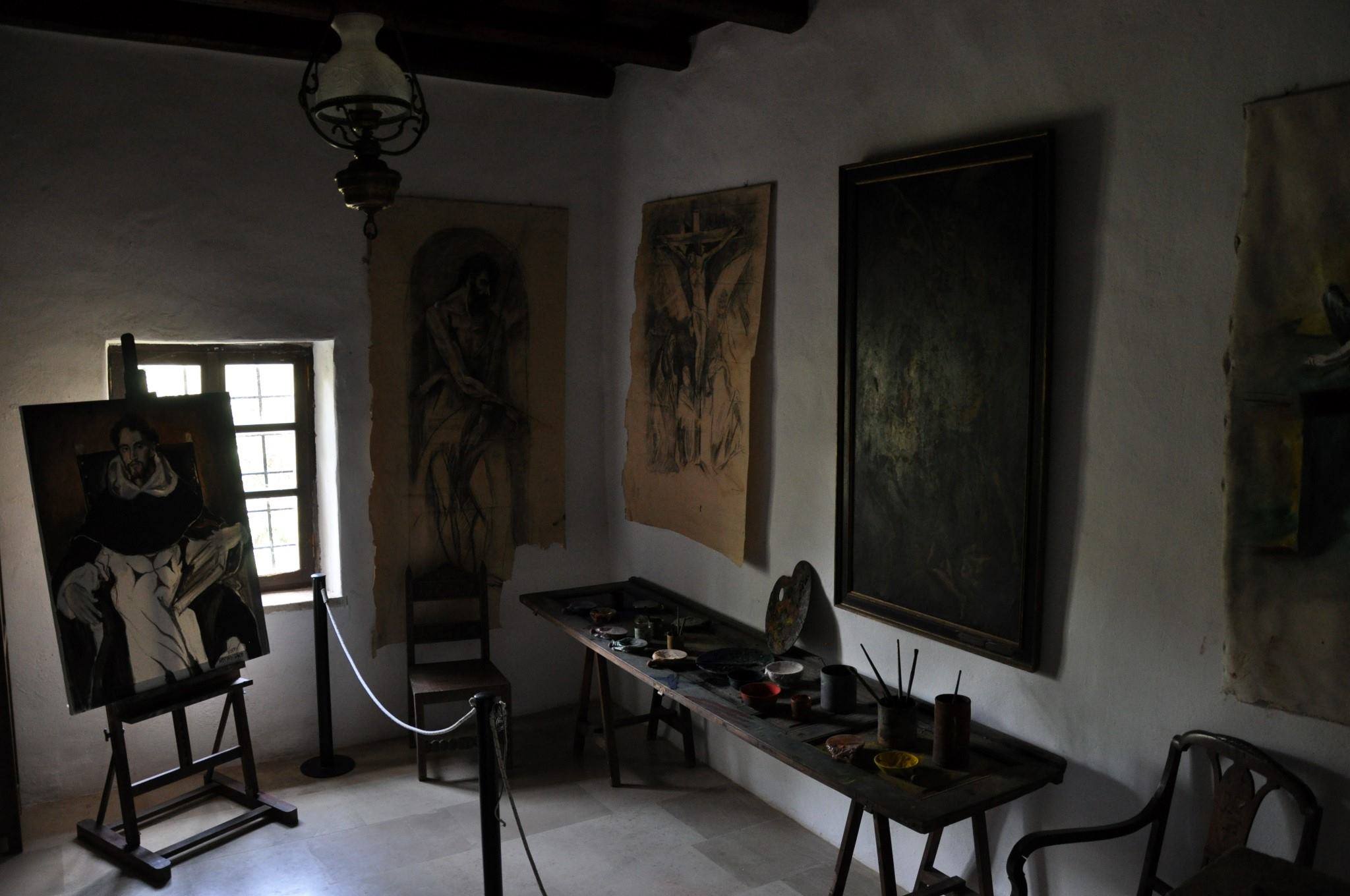 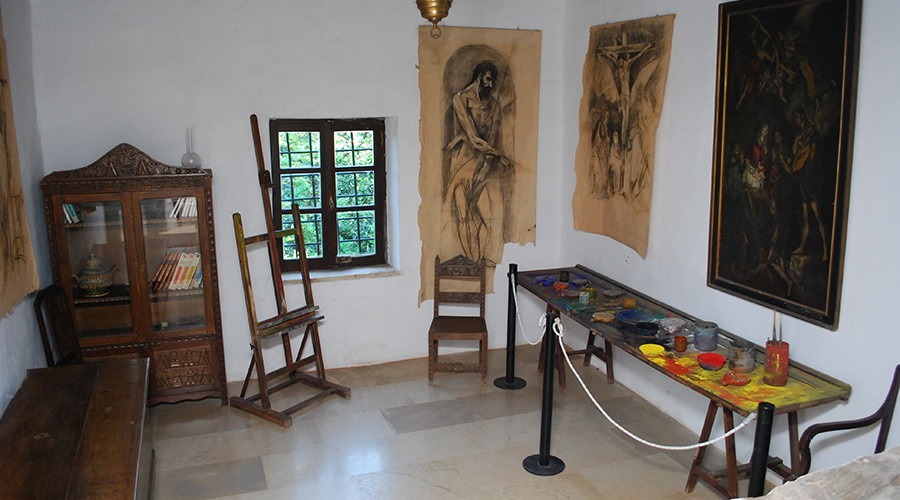 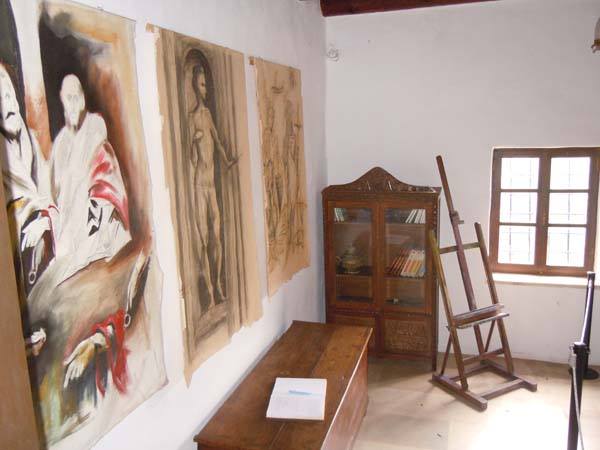 It is necessary to use ornaments of the sky as examples in the study of these invisible things, as we would do if we found drawings made with incomparable skill by Daedalus or any other artist or painter; After seeing them, a geometer would consider them to be true masterpieces (…) (PLATO, 2004, p. 243)

Plato's works are inexhaustible sources of study and research. His words above fit perfectly in an analysis of Mannerist Art and, in particular, to the style of El Greco. In the search for change and freedom, artists applied theatricality and movement to paintings, the main hallmarks of Mannerism. El Greco stood out in this field, reverberating his extraordinary Art through History, with unmistakable traces.

His characters are elongated and squirm in the midst of umbratic and desolate landscapes, as if invoking Heaven in supplication (Fig. 11). Often the only light in scenes emanates from his characters, like his Christ (Fig. 12) in his slow gesture of blessing. It is often impossible to perceive the source of enlightenment, as if it comes from Heaven.

More than listening to the voices that whispered in his ear, El Greco heard the voices of his time and the anguish that Europe still lived in the midst of the Inquisition and reverberated this echo in his Art, in the form of restlessness and dread, allowing posterity to experience such sensations through color and form.

3 Link to video of the city of Fodele
www.youtube.com/watch?v=wMfJMKcPIJo

4 Link to video of the Byzantine Chapel Agia Panagia in Fodele
www.youtube.com/watch?v=KtGpu1w4HaE

El Greco Museum by Rosângela Vig
Praise beautiful things, receive them cheerfully in the spirit, to turn them into food, and thus become noble and good (...) welcome it with tenderness and recognizes it as a relative, the better the more you’ll have been prepared for this by education. (PLATO, 2004, p. 95) Ancient Greece enchanted in the field of Mythology, with your Gods; in the domains of Literature with the Epic poems Iliad and Odyssey; and witn the Philosophy, with thinkers, such as, Plato (428 – 347 b.C.). To&hellip;

Previous: How to use books as decorative elements
Next: This Wednesday, 16, CCBB RIO reopens the exhibition Ivan Serpa to the public: the concrete expression