Home / Art / The Rococo in Brazil by Rosângela Vig

The Rococo in Brazil by Rosângela Vig

I live in your churches
And houses
And roofs
And walls.
I am that old wall of yours
Spleenwort green
Where an old
Jasmine tree looks,
Aromatic,
In the poor and dirty little streets.
I am these houses
Resting
Chattering with one another.
I am the branches
Of these trees,
With no name and no value,
With no flowers and no fruits,
That the tired people
and the birds like.
(CORALINA, 2004, p.38)

Maybe an old Brazil is still alive in some little streets of our country. Framed by its little windows, doors and churches, the time remained unchanged in the Historical cities, in its streets, lanes, and alleys. It is as if the memory insisted on surviving, amid the rooftops, facades, sculptures and paintings. When closing the eyes, one can hear the rush of old times, and the uproar of children playing games and running, through the streets. A Art, so speaks to thought, through precious vestiges that History has left as footprints of the centuries.

And the signs, from the second half of the Eighteenth century, were left in the historic cities of Minas, such as São João Del Rey, Ouro Preto, Congonhas do Campo, among others. There are still testimonies of this century in Belém, in several places of Pernambuco, Bahia and Rio de Janeiro. The Rococo, came from Europe, where it presented itself with a decorative and ornamental sense, leading to the idea of a happy life. Here, when this trend emerged, it mixed with the last phase of the Baroque, and was often confused with the Neoclassical, that arrived a little later, along with the French Mission. 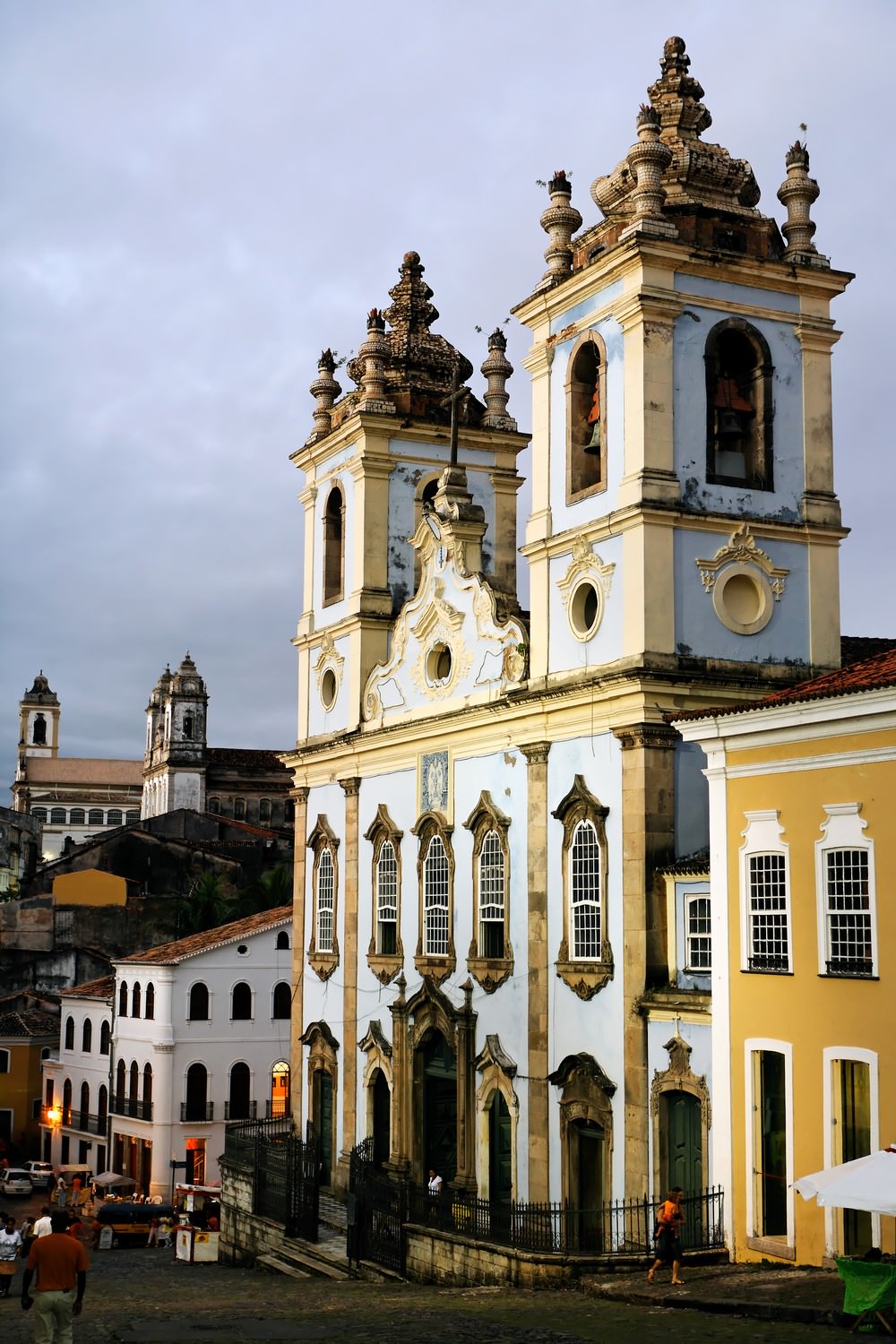 The graceful elements, the meticulous decoration and the lightness gained space in the Brazilian Art, but it was in the furniture known as Dom Joao V style and the Architecture, that this style became more evident. Unlike the European Rococo, ours became closer to the religious themes.

In colonial Brazil, to Brazilian art saw sprigs being born, shells, angels and garlands between the decorative elements. The churches and the buildings, showed symmetrical architectural lines, in a clear, and clean style that translated a sense of balance. In the transition between the Baroque and the Rococo, the constructions carried of the sensation of lightness and illumination.

An example of the Brazilian Rococo, is the Church of Our Lady of the Rosary of the Blacks (Fig. 1), in the Historic Center of Salvador. The facade, built by Master Caetano José da Costa, 1780, has Rococo style. Already the retable, 1871, in the neoclassical molds, was built by artist João Simões F. de Souza. On the outside, the blue tone of the wall reinforces the relief and softness of the lines and friezes that frame the windows and bypass the whole construction. The steeples, are two haughty side-towers, finished with a crown, completed by overlapping bulbs, covered with tiles. Four pinnacles in the corner of each tower, complete the image at the top. 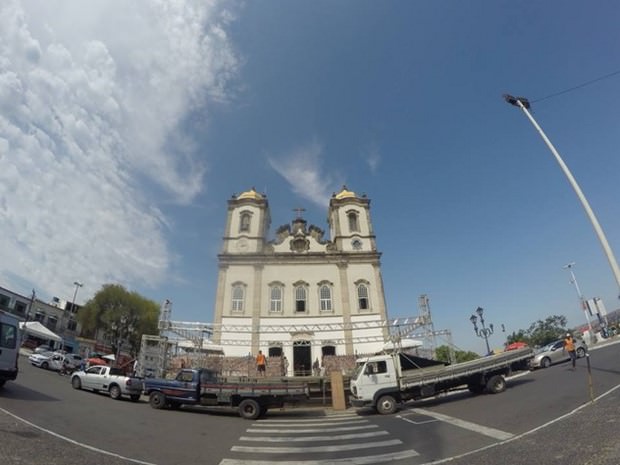 Still in Salvador, in Bahia, the well-known Church of Our Lord of Bonfim (Fig. 2) certifies its facade, the Rococo moldings, although its predominant style is Neoclassical. There are tiles and frescoes, in the building, real icons of the Christian faith that followed the standards of the Portuguese churches of the period. It is clear the distance of the Baroque, in the clear walls, the symmetrical and straight lines, in the delicate details of the outside.

In the center of Rio de Janeiro, the church of Santa Rita also attests to this transit between styles and preserves a little of History, amid the modern buildings of the city. Its construction was to the molds of the Baroque, but in 1759, its interior, the pediment and the spire were modernized for the Rococo. The bulbs and pinnacles in the tower rise expressivevely and its interior has the decoration typical of the Rococo, with use of gold, the drawings of flowers and the use of shells.

The graceful church of St. Francis of Assisi, in Ouro Preto is also part of this transition phase. Its design and some interior sculptures are attributed to Aleijadinho. Its from Baroque, the outside of the Church. From Master Ataíde the painting on the ceiling (Fig. 3), already shows traces of the Rococo. In the image, shows an opening ceiling, with the Virgin, with her mantle, in the center, looking downwards serenely, in a gesture of blessing, surrounded by clouds and musicians angels. She has the traits of a mulatto woman, an innovative characteristic for that time, referring to the reality of Brazil. The blue color, at the background of the image, gives prominence and relevance to the scene, which is still ornamented by delicate lines adorned by shells, a typical Rococo design. 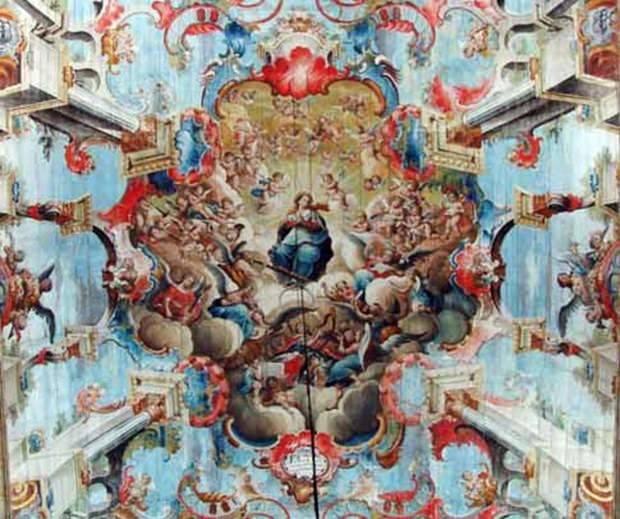 Many of the sculptors who were present at the Brazilian baroque, eventually adopted Rococo in their works, such as Manuel da Costa Ataíde (1762-1830) and Antônio Francisco Lisboa (1730-1814), Aleijadinho. Were also other prominent names such as José Pereira Arouca (1733-1795) and Francisco Xavier de Brito (probably 1715-1751).

In Brazil, the Rococo was registered in small streets, in churches of several cities and in those places where time seems not to have passed. For these places, life seems to go by the usual way and Art seems to have incorporated into the landscape. Time seems scarce, the hurried and wide steps that creep from day to day, seem to hide so much wealth. However Art is stubborn, insists in being on the road, hidden, awaiting an amazed look, at its shape, its color, so that it would be worth the brushstroke of the artist, the carving of the sculptor and the calculation of the architect.

Give to any subject
The arithmetic of metal
Give blade to metal
And to the blade, aluminum.

Give the odd number
The finish of the pair
Then to even number
The settlement of the four.

Give to any line
Design a straight pin,
Give the circle, its straight
Its rational square.

Give to the sculpture, the clean,
From an Art Machine
In turn, capable of Art
To give herself an explicit space.

Previous: Maroka presents his own style for oil painting by Edmund Chandra
Next: The Zero gravity by David Bowie