On 28 September, Ligia Calheiros opens the exhibition "Remaining”, the Cultural Post Niterói. Leah curation of Rio, the show features seven works, between installation, series of photos, object and drawings, created from the interference of the artist in everyday items about to be discarded. The Ligia research stands out for "dissection" of simple everyday objects, who have lost their use, bringing to light their inner layers secret, their waste, for the meeting of new objects and meanings. The exhibition is on until 16 th November of 2019, with free admission.

According to curator, by interfering with objects using various means, the artist observes the events that arise, taking advantage of what gives meaning to the process. In this game, often it creates other objects from themselves: the parts which separate the whole can become independent or, mostly, go together, affirming its links. “The Ligia look is attracted to objects that are on the verge of becoming something almost meaningless, they lose their function. Not knowing the length of what until then had a perfect balance Ligia lead to want to wake him. Find its essence it is fundamental ", Lia says Rio. 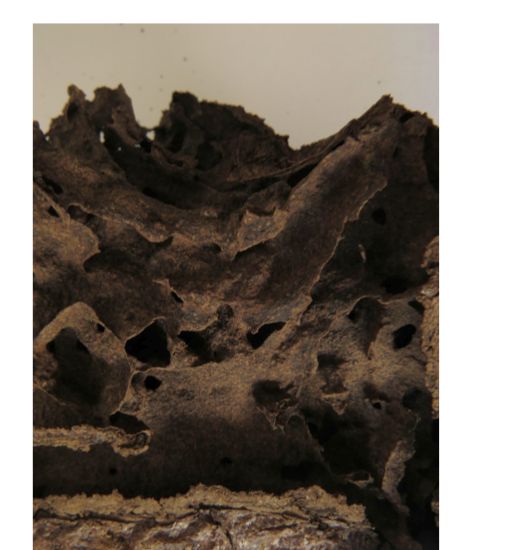 The exhibition “Humanities“, the artist Rodrigo Pedrosa, It aims to provoke questioning about the contradictions and inconsistencies of human nature. Pedrosa looking shifting contexts and points of view to look into issues that deal with the human condition: the loneliness, the fear, self-destruction. The imagery spectrum of his works notice, collect, counteracts, proposes, instigates and confronts those ideas.

The exhibition "coal"Uses this raw material as pictorial element in two exhibition rooms, on the ground floor of the Cultural Post Niterói. These are paintings in triptychs and diptychs large, in which coal and create special lighting surface reliefs and. By using one of the most polluting fossil fuels in the world, since the Industrial Revolution, Dudu Garcia makes an allusion to the transformation of society and the very illusion of development.

The show “Traces” It was created from the Marcia Rommes search, resulting in the development of a type of polymer that has become raw material for the development of rich textures and shapes parts. The works are presented as memories records, poetic narratives that raised discussion and reflection on time and memory. A poetic and aesthetic affective able to transport us beyond the formal construction.

WHEN SUNRISE (OR DIE) NOT A CHOICE – LAURA FREITAS

Laura Freitas meets investigations around the egg aesthetics “when born (or die) It is not a choice“. In shows, the artist explores the symbols and imagery seizures egg. Altogether there are eight jobs exposed between drawings, sculptures and small plants in which coal drawings on paper and shredded cotton sewn with thread join the broken eggshells and reconstructed with plaster bandage and tailoring.

At the show "Nature”, Lia Rio brings together photos and videos, as well as a facility in the center of the gallery. I read the works of Rio refer to life in big cities, seeking to rescue the potential of materials, of things, human, than carry itself. The project's guiding principle issues that address the nature, urban, time and culture.

Previous: Visits to Museums and chat with the artist Rosana Paulino
Next: Exhibition “No way back”