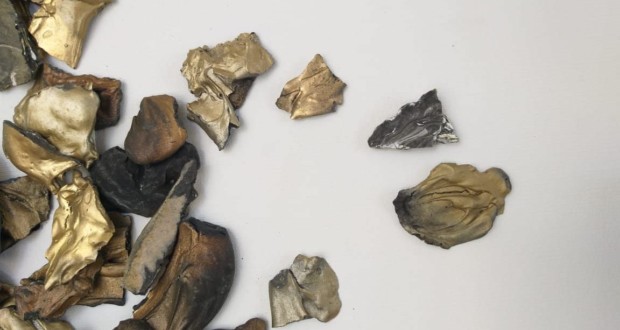 Shows open on the day 10 August and runs until 19 October, Leah Rio curatorial.

On 10 August, visual artist Marciah Rommes inaugurates four facilities in the Cultural Post Niterói. Leah curation of Rio, the exhibition "Traces" brings together more than 3 thousand pieces formed by a body created from the material mixture, research topic since the artist 2011. In four large rooms, objets of 15 cm a 2 meters, of shapes and unusual textures, climb the walls, encroaching on the floor and distributed in stelae *, as vestiges of an ancestral language, referring to another type of reasoning. The show is to 19 October, with free admission.

Without prioritizing angles, rays or diagonals, abstract forms created by the artist are based on traces of historic civilizations and their memories, represented by symbols, codes, materials and objects. "I developed a kind of mass that became raw material for the creation of pieces of different shapes, that seem to appear as memory registers and poetic narratives ", tells the artist. In dialogue with the Post Office space, the exhibition reflects on memory, time and how messages, the narratives and stories are distributed and culturally experienced by companies.

Arranged in space as an architectural writing, mass fragments in black shades, golden, copper or tin invites a new way of reading, alluding to deep meanings. According to curator, the elements seem to reveal memories encodings, knowledge of waste. "The work of Marciah Rommes refers to issues of human being what the move within your psyche and is settled by the time lived. The narrative organization makes us reminiscent of vague impression. It is as if we could enter the space-time of our mind ", Lia concludes River. 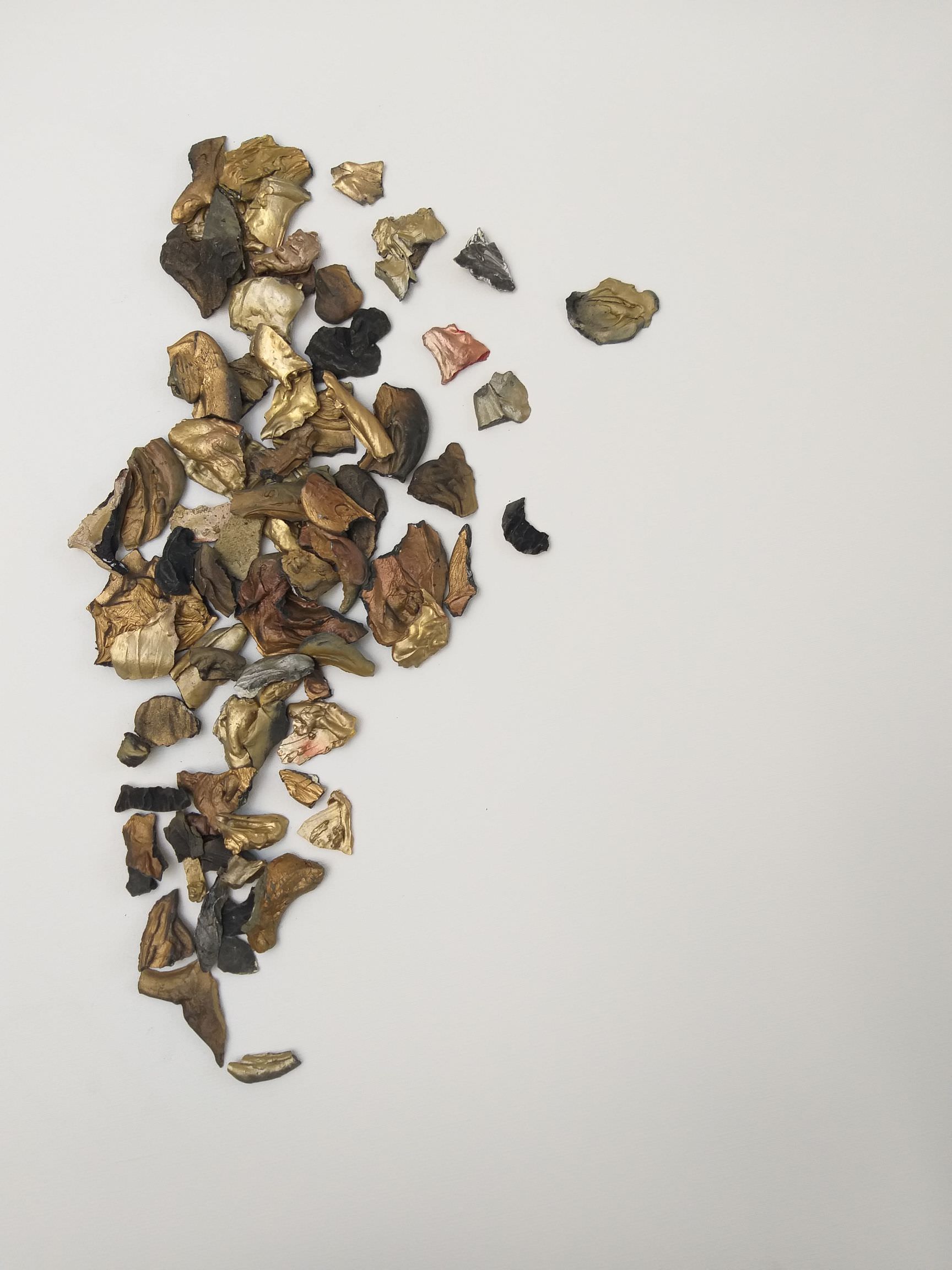 Born in Rio de Janeiro, with Brazilian and Luxembourg citizenship, He graduated in Psychology at UERJ. He began his career as a visual artist from studies in painting and photography. Attended free courses at the School of Visual Arts of Parque Lage. In 2018, He attended the Art Residency in cyanotype, no LabClube. Participates in research groups and development projects in visual arts at the Atelier Printed Project, Studio in the OKO Gallery Contemporary Art and integrates the group discussion "Speaking of Contemporary Art". Since February 2019, attends graduate in Art History and Visual Culture from Candido Mendes University. It has participated in over 30 exhibitions, and this, Cultural Space Post Niterói, his third individual. 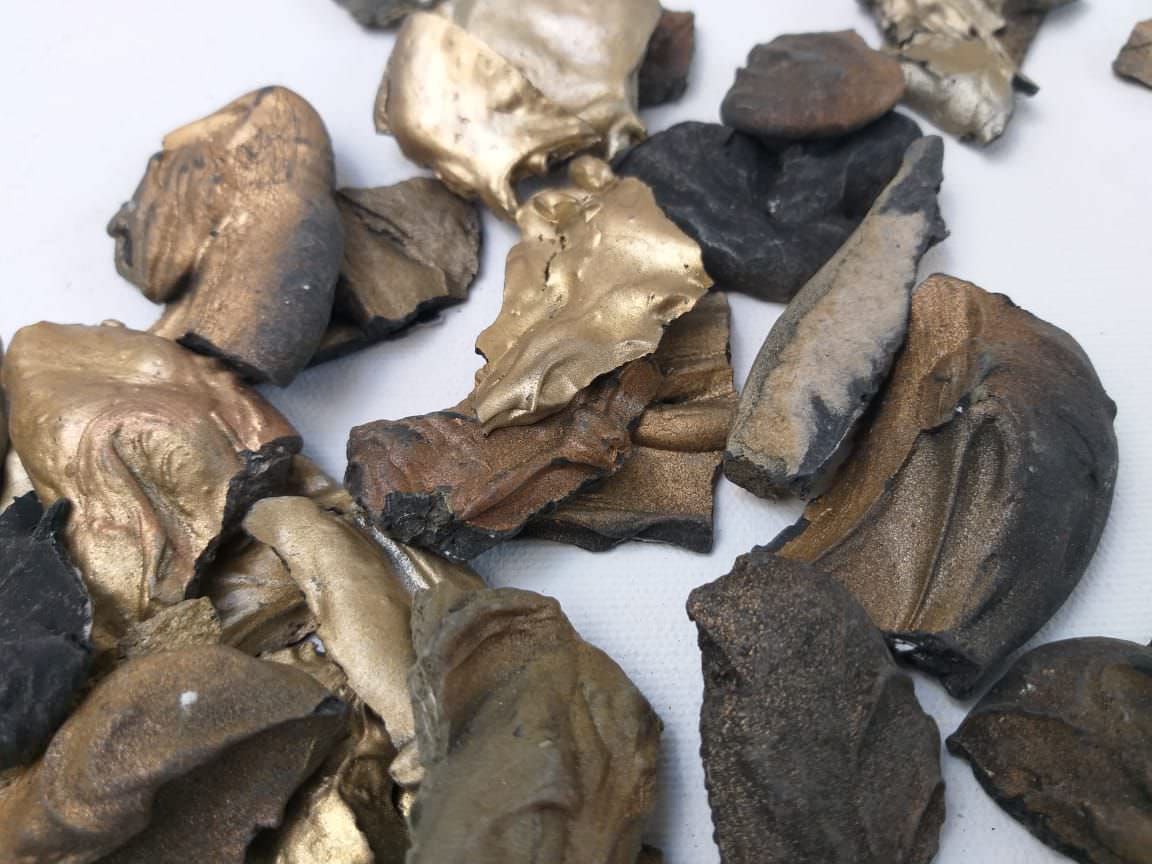 He was born in sao paulo, lives and works in Rio de Janeiro. It holds a degree from the National School of Fine Arts of the UFRJ; a postgraduate degree in Art and Philosophy, and graduate in Ancient Philosophy, shell PUC-RIO. Over four decades, He participated in numerous solo exhibitions, collective and lectures in Brazil and abroad where he received awards and has works in collections. As an art teacher, He taught at institutions such as Parque Lage and Calouste Gulbenkian Institute. coordinates exhibitions, workshops and lectures, and keeps track of various artists. Your book Lia River: About Time Nature It has been edited, in 2015, the label Phase 10.

Paint to immortalize – Collective Atelier Baluarte
By 3 August (last week)
The show's main intention to issue a general warning to the human being who lives in constant confrontation with nature, transposing to the screen which may in the near future no longer exists more. The idea came from deep observation, the huge amount of animals that are entering the extinction list, this list that extends increasingly, as time passes and we, Humans, we remain insensitive to the fact that they are also part of our existence.

beings – Jaime Acioli
By 3 August (last week)
In addition to studying the magnificent forms of nature, the photographer Jaime Acioli treats each plant photographed as being and not just as a way. The result is a set of tiny beings, often not seen by most people, expanded to the human dimension and the haughtiness of a being portrayed. The show “beings” is inspired by the work "Art Forms in Nature", German photographer Karl Blossfeldt.

Fragmentation of Being – Isabella Marino
By 14 September
Isabella Marino exposes 16 works between drawings, painting and objects that resulted from a combination of flowing rhythms and graphics, either using materials such as coal, now making use of techniques such as use of waste and collages. The works propose the viewer to question the self fragmented and divided society.

As well as those who seek – Nadia Aguilera
By 21 September
The artist uses a mixed technique in which the design, painting and collage are at the service of a game tickets, in such a way, we could relate it the experience of a dream or a memory. The exhibition features 35 works in which objects and images appear in the midst of urban architectures idealized, while characters, for not what relate specifically, become part of moments in which something always seems to be about to happen.

Humanities – Rodrigo Pedrosa
By 31 August
The exhibition of the artist Rodrigo Pedrosa, It aims to provoke questioning about the contradictions and inconsistencies of human nature. Pedrosa looking shifting contexts and points of view to look into issues that deal with the human condition: the loneliness, the fear, self-destruction. The imagery spectrum of his works notice, collect, counteracts, proposes, instigates and confronts these ideas.

ComTemplo – Ana Biolchini
By 10 August
The exhibition by the artist Ana Biolchini is a large installation that occupies the entire Gallery I, located on the top floor of the Cultural Center Post Niterói. In this way, we have a work "specif site", which was specially created according to the environment and space. The show "contemplate" is a planned work, in which sculptural elements dialogue with the surroundings, for which the work was prepared.

* monolithic monuments in which the ancients did registrations.