my heart feels very happy!
this upturned chill
makes you want to smile!

The energy that emanates from the artist's hand is delusional, during the daring brush walk through empty space. do white, bold enclosure, where art emerges in a blaze, gathers thoughts and lifts the soul. Not even the artist's dripping forehead, or even your pounding heart could never describe the moment of the creation of a work, since the birth of the created scene. It might even seem like, the artist, the real whirl is only in your soul. The work itself does not travel through the bold and unfathomable fields of his thought. But she manages to reach the closest risk to what she once dared. From your original idea is then the thrill; the trickle of the spirit that cried out to a deafened body remains; is the timid idea that was drawn on the white canvas. This is the Art, a Grande Arte, the one who surrenders to the enchanted spirit. Happy is he who can see this thin wall that hides an unrestrained universe.

And this effervescence of thoughts is of such greatness that it blossoms in the work in the form of joys, of heartbreaks and afflictions. Such eloquence was clear in Brazilian Poetry and Art in the early 20th century. As for Poetry, Mário de Andrade's words make this restless spirit evident., eager to articulate all his melancholy. His dejected state is imprinted on the saddened and cold scene, with the gray sky.

The unrest of the new century came with two Great World Wars, the first among 1914 and 1918, and the second between 1939 and 1945; the Russian Revolution (1917); the spanish flu (1918 to 1920); in addition to revolutions and political movements within Brazil. The cultural and social transformations that took place here were due to the large number of immigrants arriving from different countries, running away from wars. Brazil was witnessing the start of industrial production and, by consequence, economic growth.

In this context, Brazilian Culture was also recreated influenced by new artistic languages ​​brought from Europe. The anxieties of the period manifested themselves in Art as never before and, both in Literature and in the Visual Arts the manifestations arrived in a dizzying way, expressing the essence of the thoughts of writers and artists inspired by the Vanguards.

The artistic demonstrations in Brazil had a great milestone, for two weeks, in the month of January 1922, with lectures, art exhibitions, Dance performances, of Poetry and Music. The event known as Week of Modern Art forever changed the concept and characteristics of Art in Brazil. Performed at the Municipal Theater of São Paulo, the cultural event was known as Modern Art Week1 and reconfigured aesthetics in Brazil.

Modernism in Brazil had as its starting point the idea of ​​leading Art to a truly national standard, which led writers to come together for an awareness of the period. Proposing a fundamentally Brazilian Art, Oswald de Andrade exposed his judgment in newspapers, urging artists and poets to join this movement. Oswald de Andrade's ideas gained momentum, led changes first to Literature and then to the Visual Arts, consolidating itself with the great event of the Week of Modern Art, in February 1922. The project came to fruition when Paulo Prado (1869-1943), prestigious man by São Paulo society, encouraged other magnates to sponsor the cultural week. 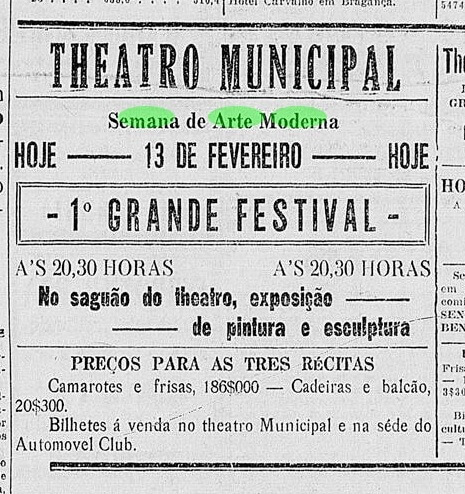 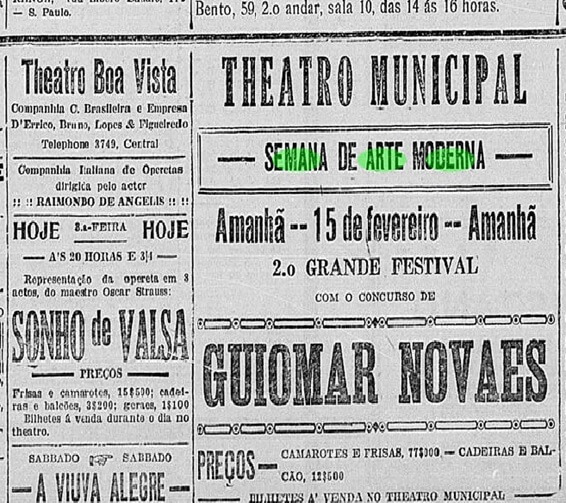 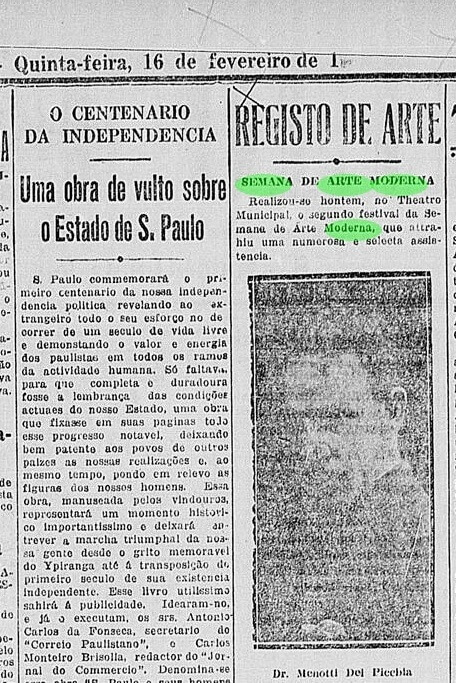 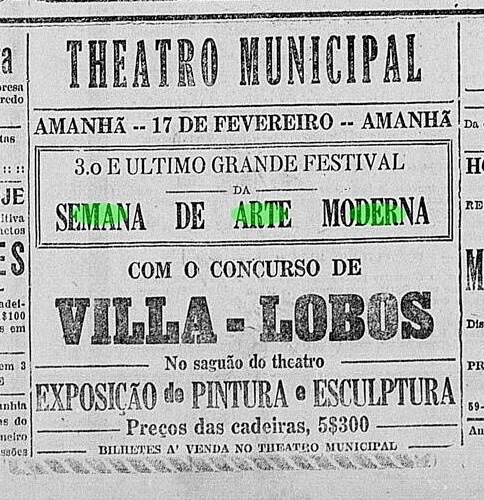 In the different areas that encompassed the Modern Art Week, there was no pre-established aesthetic, just the conviction that traditionalism and the past should be completely abolished. The modernists had as their most important points the search for freedom; for a style that was not brought in from outside, oblivious to classic shapes. Mário de Andrade's lecture, on 15 proposed this reinvention of aesthetics, which culminated in his publication of A Escrava que não é Isaura (1925).

In the field of Sculpture, Bruno Giorgi took works to the heart of Brazil, making it even more beautiful, the city designed by Niemeyer and Lúcio Costa. the Candangos, in the Praça dos Três Poderes; and Meteor (Fig. 5), in the reflecting pool of the Itamaraty Palace; perhaps they are among the most representative works of Brasilia.

In the field of Expressionism, many of his works are presented in the form of sensually delineated torsos, sneaking and/or moving, pray hard, now pensativos. Just like in Candangos, your forms are unfinished, turn sideways, expressing in an exaggerated way, interspersing and relating, like in a movie. The characters may now be looking at each other, now looking at horizons unfathomable, as if they reflected on their lives, of your world. They may be reflections that the artist himself made, while working on the art object. Bruno Giorgi even exhibited his works in Brazil and Europe and had a deep friendship with several artists of Brazilian Modernism, among which Alfredo Volpi (1896-1988). 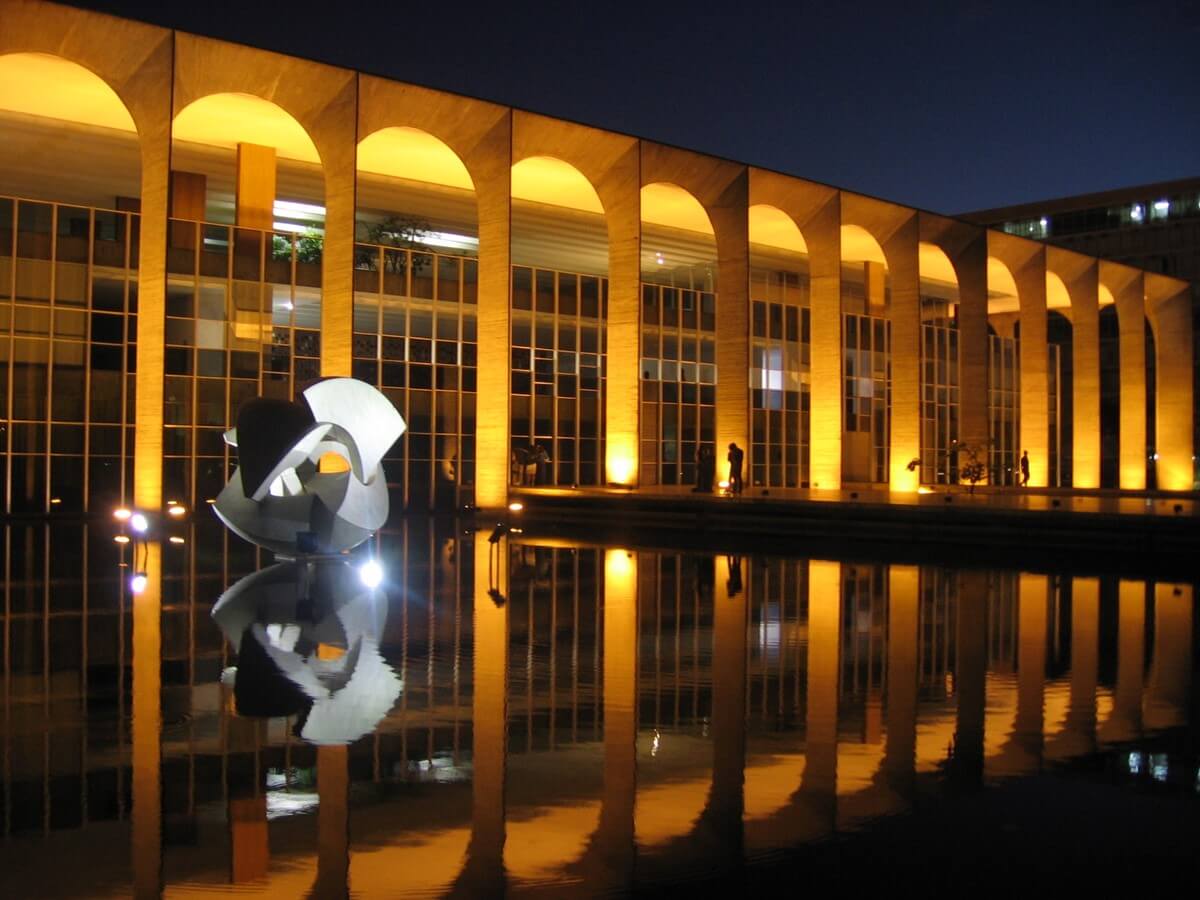 My feet are close to the thorns of the sidewalks…
Higienópolis! … The Babylons of my base desires…
Noble houses of style… Enriched in tragedies…
But the night is all a bridal veil in the moonlight!

To rise from the glow of the mansions…
the jazz-band of color... The rainbow of perfumes...
Or clamor two chests crammed with lives ...
bare shoulders, bare shoulders, lips heavy with adultery…
And the rouge - mushroom of rots...
Armies of learnedly well-tailored coats...
No crimes, no robberies the carnival of titles…
If it weren't for the talc, goodbye flour bags!
Mercilessly…
(ANDRADE, 1987, p.99)

Getting to the essence of a work is carrying the thought of uncommitted intuition. It's arousing the fascination and beating of a heart carried away by words, by colors and by shapes. The simple value that awakens from subjectivity carries forever the core and what is most alive in its essence. And the simplest thing highlights emotions and brings up concepts, reflections, what is unworkable, fosters or intellect. It has always been this way with Art and perhaps this judgment has emerged with vigor in the beginning of the 20th century with the new aesthetic languages.

The vanguards arrived in Brazil and culminated in the Week of Modern Art, definitely breaking away from classic patterns, but, above all in line with a national standard, that produced a genuine Art of this country. This was the Modern Aesthetics in Brazil at the beginning of the century.

The passion for art and the contact with Expressionism in her travels around the world was of fundamental importance for the artist Anita Malfatti4, 5 begin his painting studies and lead the viewer's gaze through the fields of Expressionism. His first art exhibition in Brazil took place after his return in 1914 when he released the style around here.

Born in Lithuania, the artist Lasar Segall6 (1889-1957) it was also of fundamental importance in Brazilian Art and Expressionism. In 1923 when he arrived in Brazil, the artist was already established and was influenced by Expressionism, style with which he explored war and suffering.

the reflection, suffering and social criticism were themes present in the works of Cândido Portinari7, 8 (1903-1962). The striking colors and the unique style (Fig. 6) led the artist to be internationally recognized. His line led the gaze to the childhood that the artist himself lived in Brodowski, in the interior of the state of São Paulo and reflection on rural work and social issues.

Expressionism was clear in the work Retiring from 1944, Portinari, whose theme is the northeastern migration. The family that seeks better living conditions leaves the region of origin. The situation of misery is imprinted on each member of the family, in adults and children. There are no prospects, there is no food, the land is dry and arid, how is the soil and how are your cadaveric bodies. In their faces, the expression of sadness coincides with the scene and with the dryness of the skin of each one of them. wrinkled by thirst, by hunger and by the sun, are still united and walk together as a family. The land does not give truce, more life insists. in colors, there are funeral tones; in the form, the thinness of the bodies, with protruding bones makes them look like unreal beings. Everything is bleak in the scene. 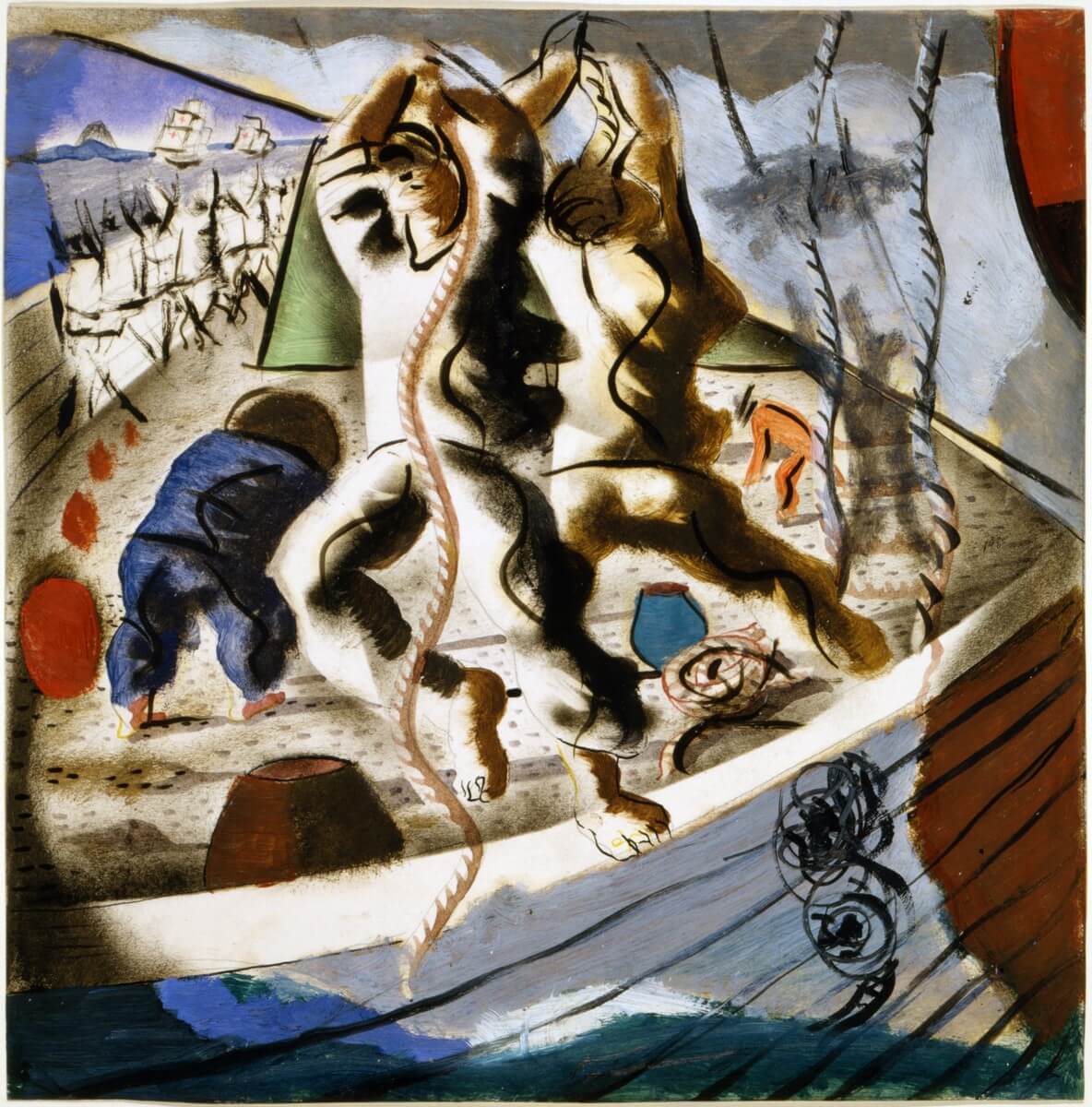 Macunaíma followed and ran into the tall Volomã tree. On a branch was a pitiguari that barely saw the hero, he broke down singing – “Look who's coming! look the way who comes!” Macunaíma looked up with the intention of thanking, but Velomã was full of fruit. The hero had been so hungry for hours and his belly got stuck looking at those shoes, sapotilhas, sapotes, bacuris, apricots, maid, miritis, guaby, watermelons, ariticuns, all these fruits. (ANDRADE, 1984, p.87).

In the book, Mário de Andrade presents a hero in reverse, no character, lazy, cunning and full of wiles. His life was in the middle of the Brazilian forests, feasting on our fruits and living with the characters that populate our legends. In Mário de Andrade's text it is possible to notice Modernist characteristics. Just like in Poetry, just like in the art of the time, the text presents metaphors, the illogical and the abstraction.

The Culture that was born in Brazil brought the smell of the forests, the colors of the forests, the songs of a happy country; but it also brought the tribulations of a growing country where immigrants came fleeing wars. A country that built its History and Culture. A Brazil that imported an artistic movement, but that delineated it according to its field of knowledge, your conceptions.

The movement at first was not very well received., raised criticism and discussions, which were published in the newspaper O Correio Paulistano9. But Brazilian art still never had such a striking identity.

Previous: Last days of registration for the course Data Organization and Construction of Indicators for Cultural Management
Next: No X Art Fact (24/08), regional music, popular and sertaneja to celebrate bank employees' day