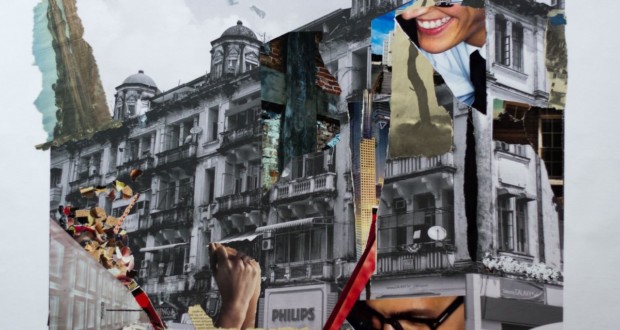 The show "Just as those who seek" opens in 20 July, Leah Rio curatorial.

From collages printed on canvas, artist reflects on life in large urban centers, between oppression and the expectation.

Nadia Aguilera exposes from the day 20 July, the Cultural Post Niterói. In the show "Just as those who seek" the artist gathers around 25 collages, based on photo. On printed canvas support, Aguilera's works refer to life in big cities, with its tangle of wires and skyscrapers, where something is about to happen. The exhibition is on until 22 September, Leah curation of Rio and free admission.

From the crop photographs pinched books, magazines or old newspapers, Nadia Aguilera creates unusual urban landscapes, mounted in a fragile and strange balance. His collages recreate urban chaotic environments, in an atmosphere of oppression and expectations. In a game of 'reinterpreted', her work of deconstruction of something that was already performing for granted, can turn into something else now and also the next moment. "By sticking want to show what can occur in the immediate moment. My approach is that earlier thriller the next move ", tells the artist.

According to Lia River, Nadia Aguilera uses a mixed technique in which the design, painting and gluing refer to a time in suspension, as the experience of a dream or memory. "Objects and images appear in the midst of urban architectures idealized, while characters, for not what relate specifically, become part of moments in which something always seems to be about to happen. Decoupling the situations created gives rise to unfulfilled expectations ", says curator.

Large facility that occupies the entire Gallery I, located on the top floor of the Cultural Center Post Niterói. In this way, we have a work "specif site", which was specially created according to the environment and space. The show "contemplate" is a planned work, in which sculptural elements dialogue with the surroundings, for which the work was prepared.

In addition to studying the magnificent forms of nature, the photographer Jaime Acioli treats each plant photographed as being and not just as a way. The result is a set of tiny beings, often not seen by most people, expanded to the human dimension and the haughtiness of a being portrayed. The show “beings” is inspired by the work "Art Forms in Nature", German photographer Karl Blossfeldt.

The show's main intention to issue a general warning to the human being who lives in constant confrontation with nature, transposing to the screen which may in the near future no longer exists more. The idea came from deep observation, the huge amount of animals that are entering the extinction list, this list that extends increasingly, as time passes and we, Humans, we remain insensitive to the fact that they are also part of our existence.

Exhibition presents the vision of the photographer Luisa Vergara relations under the lights of the shows. As light is the essence of photography, in a record the technical part allows capture a moment, but the intensity is present in the composition that makes us able to feel the notes through an image. A shout, a solo, one beat. It's all there stored in each pixel.

Previous: The July holidays in Educational CCBB – Art and Education have many special activities for babies and all ages!
Next: Abreu Fabiano receives Portuguese politician in 'Philosophical Table' and talks about the excessive use of social networks