Home / Art / Together for Culture Program 2020, by Rosângela Vig 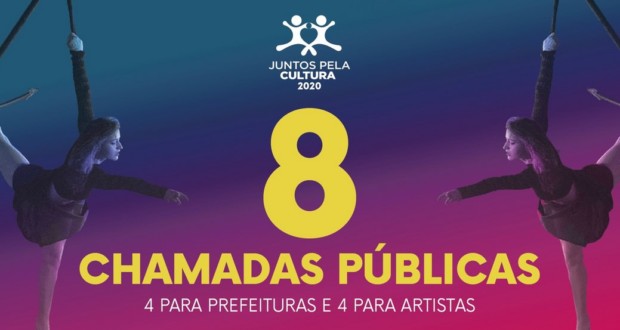 Together for Culture Program 2020. Disclosure.

A Secretaria de Cultura e Economia Criativa do Estado de São Paulo lançou oito chamadas públicas do programa de fomento Together for Culture 2020, aimed at city halls and artists from interior cities, the coast and the metropolitan region of São Paulo, in order to stimulate the cultural and creative sector in the context of the crisis generated by the pandemic and guarantee access to art, to culture and the creative economy in all regions of the state.

All content and shows produced from the public notices will be shown on the #CulturaEmCasa platform.

Calls to municipalities are:

– Virada SP Online: at least ninety-six art and culture activities will be selected, in sixteen municipalities (except capital). The realization of the events starts from 24 October.

– Revealing SP Online: municipalities must nominate up to eight artisans, culinaristas, masters and demonstrations of traditional local culture for the elaboration of audiovisual record on stories, curiosities, ways of doing, materials and tools involved in the practice of traditional São Paulo handicrafts and cuisine.

_ Revealing SP Training Program: selection of up to sixty municipalities in the state, through artisans and culinarians that represent the valorization of the traditional culture of the municipality and region. Municipalities may nominate up to four artisans and culinarians from the traditional local culture for participation. Lectures will be held, business plan, digital strategies, individual mentoring, in addition to an exclusive lecture for municipal managers of city halls.

– Tradition SP Online: the selection of forty municipalities to support actions that include the virtual dissemination of local events, that are tradition on the local calendar and have great cultural impact.

All municipalities of the State of São Paulo may participate, except the capital.

And calls to artists are:

– São Paulo Online Circus Festival: intended for the selection of proposals for circus attractions in an online version for participation in the festival, which will take place in November and December on the #CulturaEmCasa platform. Twenty online traveling circus shows will be selected, twenty online shows by groups or repertoire companies, two hundred circus numbers online and one hundred circus workshops online.

– Viola Caipira Contest Revealing SP: program for the selection and awarding of guitarists from all over the state of São Paulo and an integral part of the Revelando SP Online program. Each participant must send a video presenting his solo performance that demonstrates technical capacity and quality as an instrumentalist. Fifty guitarists will receive a first prize and will be able to participate in a popular online vote, where the most voted will receive the public award. The top ten scorers will participate, further, of a final event, where the three best guitarists will be awarded by a specialized jury.

– Guiomar Novaes Piano Competition: the contest is an integral part of the 43rd Week Guiomar Novaes program, that will take place virtually on the #CulturaEmCasa platform and in the Municipal Theater of São João da Boa Vista, from 24 to 31 October. Twenty pianists will be selected, ten in the popular piano category and ten in classical piano.

– São Paulo Rhyme Battle Contest: selection and awarding of the most relevant freestyle battles in the State. From that selection, another final event will be held with participation and awards from representatives of the selected battles, that will take place virtually on the #CulturaEmCasa platform and at the Sérgio Cardoso Theater, in São Paulo, in November and December 2020.

Previous: Anxiety can be beneficial if it is controlled, states psychoanalyst
Next: Pair of Nast pots goes to auction in São Paulo