Check the details of the virtual concert meetings, Opera, dance and theatre

To welcome the arrival of 2021, the project Sound Culture Route, Dinner and Body starts its activities from the day 18 January with workshops Online and free about the performing arts. With open enrollment, the meetings will take place until may, always on Mondays and Wednesdays by the zoom application, 7 pm to 8:30 pm.

According to Patrícia Ceschi, director of Aymberê Produções Artísticas, responsible for project management, the program presents a cycle of reflective and creative encounters about concert languages, Opera, dance and theatre, mediated by educators with experience in the themes. Each of the artistic languages ​​will be studied from an available work Online.

The concert is the first language to be investigated, starting from the work The Caipira Train, by Heitor Villa-Lobos, interpreted by OSESP (São Paulo State Symphony Orchestra). Minister Maurício Ayer will lead participants to questions about what music is and how an orchestra is formed and organized. Practical exercises are also part of the workshop and it is not necessary to have previous experience with music to participate!

Each Module proposes four zoom meetings and two lives open to the public with special guests, which will be broadcast on Aymberê's youtube (subscribe to the channel!). For the Concert, the project has the presence of Emmanuele Baldini, Shoulder from OSESP, and Adriana Schincariol Vercellino, Emesp violinist and Orchestra of the Municipal Theater of SP and teacher. Follow the project's social media dissemination (link).

The classes are geared, preferably, for public and private education educators and young people from 16 years, with priority also for residents of the northern area of ​​São Paulo. If the vacancies are not filled, other people who do not fit these priorities may be called upon.

The Culture Route is carried out via ProAC ICMS with sponsorship from Viação Cometa, strategic support from the JCA Institute, production and creation of Aymberê Produções Artísticas and organization of the State Government of São Paulo and Secretariat of Culture and Creative Economy.

The project is part of an art and educational action initiative called Vila Maria Arts Park, since 2016 carries out projects designed especially for Parque Vila Maria, neighborhood where Viação Cometa has been located for 65 years, besides supporting other artistic and cultural projects. 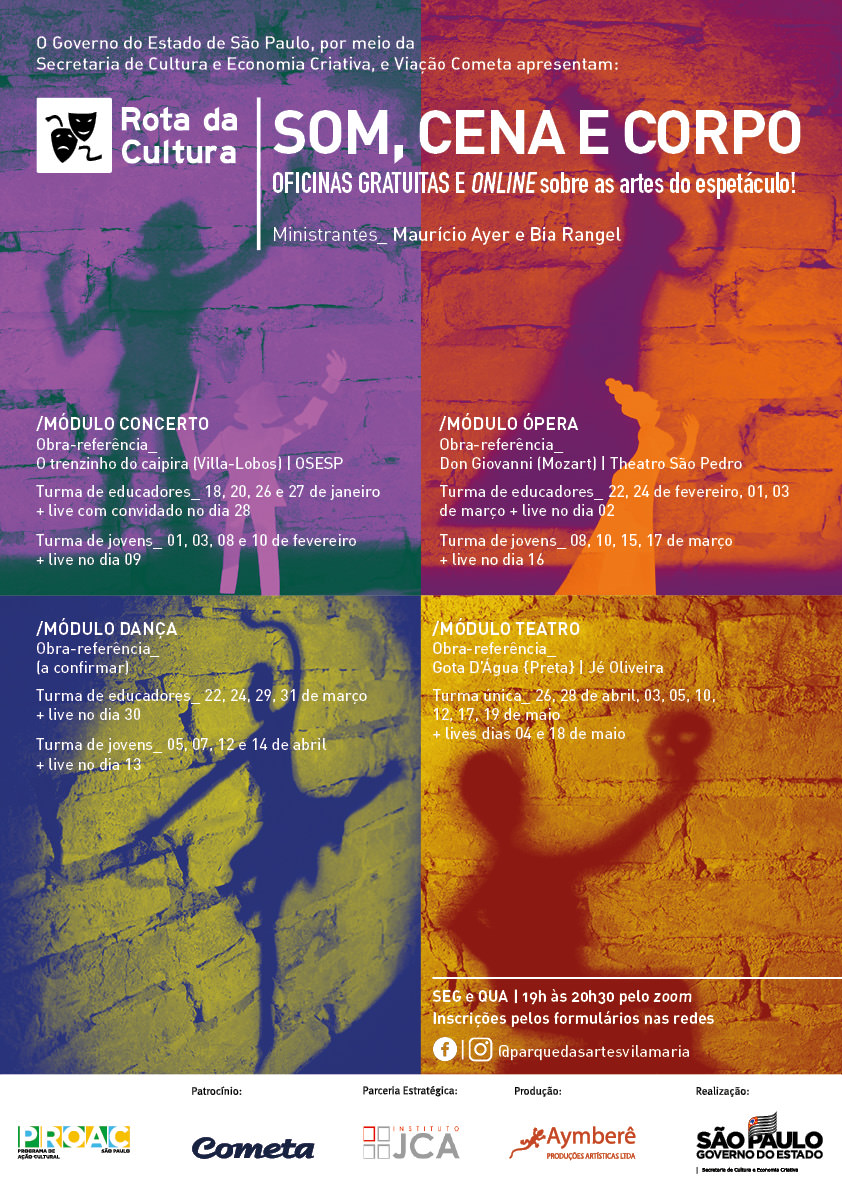 Opening hours always from 19h to 20h30
Through the Zoom application

Professor, poet, playwright, translator and editor, Ayer currently teaches French literature at FFLCH / USP, which is responsible for the French Theater and Poetry disciplines French I. Degree in Music / Composition by FASM, a doctorate and post-doctorate at FFLCH / USP and expertise at the University of Paris 8, France. With a strong presence in various art-education projects, also conducts research on intersections between the arts, especially between literature and music.

Dance artist and researcher. Master's student in performing arts at USP, with research focused on the relationship between dance and sound production. Develops solo work, integrates the Nucleus of Dance and Music, participated in work with groups in São Paulo as a Nucleus Meanwhile, [MOS], Cia Eito Nova Dança. Culture activist and interested in cultural policies. Graduated in journalism.

The Traffic Comet, company of the group JCA, stars in a story of 68 successful years in passenger transport. Currently has about 600 buses in its fleet assets, 2.400 employees and over 14,5 million persons transported annually. It is organized in 6 Regional branches, in the states of São Paulo, Rio de Janeiro, Paraná and Minas Gerais.

The Institute works in the perspective that social inequality is an issue to be overcome for the establishment of a better society. For this, We chose to act in the areas of education and culture, with projects that improve opportunities for young people and the design for a future with more choice. About IJCA leader, along with other public and private organizations, a move to qualify the educational policies in the Metropolitan Region East Fluminense of Rio de Janeiro and acts in the past two years in expansion projects encouraged concatenated to the areas of culture and sport in São Paulo, in particular, for the young residents of the Park Villa Maria.

Founded in 2010, the Aymberê Artistic Productions offers unique designs of art and culture seeking to approach contemporary artistic languages, questions relevant and sociocultural transformation to all audiences. The portfolio covers national and international productions and development and management of unprecedented cultural projects. Since 2016, Aymberê works mainly in the creation and development of projects with companies. More info: www.aymbere.com.br

Previous: 10 YEARS OF THE MUL.TI.PLO
Next: Wattpad can open doors for novice and veteran writers