Distribution of passwords: 30minutes before the activities, by the CCBB Educational on the ground floor. 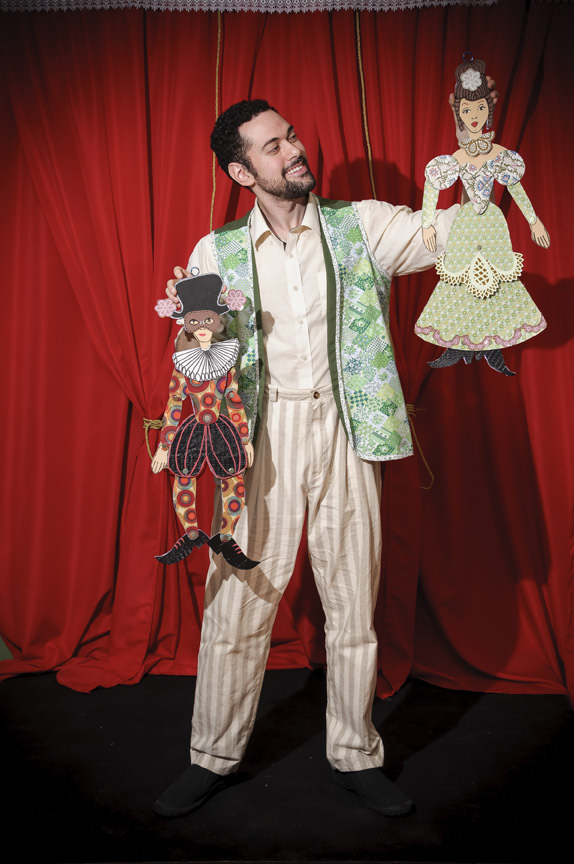 There are many ways to terminate a narration. Mathematical forms as “Entered by the duck's beak, left foot cock, who wants to count five”, funny as “Once upon a time a cow Victory, gave a… no more history” or short: “Trim-trim the story is in order”. We believe that it is a pleasure for both the one who narrates and has the privilege of offering the public a good story, as for the listeners. Therefore, We can say “The tale is over and the wind took it, and all the evil is gone; and for us and those we heard only the well was”.

In honor of the week of the children and to celebrate the 26 years of the Centro Cultural Banco do Brazil, Rio de Janeiro and your educational project, the institution performs, from 10 to 12 October, the IV Festival of storytellers. The project will bring several attractions. All have in common the tell and listen to stories through which the public can find out other places, times, ways to act and to be, rules, other optics. As well as the way of thinking of the CCBB educational proposes dialogue, opens up possibilities and access.

In the presentations of groups such as the storytellers, Jujube and Ana Nogueira and Canoodling, now the word constructs the scenario, now dolls, props and live music punctuate the narration. The door is open for other areas see the front of the spectators.

Come venture for these lands where you can be part of the fiction and live adventures. The presentations are free. Passwords distributed with 30 minutes in advance, by the CCBB Educational on the ground floor.

Varied session with a trio of tales and African myths of various origins: Yoruba, FON, Bantu. In "Exu and the two flaps hat" two friends farmers, We do everything together, from small… until the day a very strange wrong on the road that runs through the land of the two. In Iroko, We know that the tree of time protecting the village against spells. In the third story, Andjau since childhood dreams of being a fisherman, but without luck can only fish to eat. Is when, in the middle of the sea, under a full moon, He meets with the Mãe d ' água.

Tatiana Henry plays with story-telling stories 14 years, developing your scenic research on body language in Amerindian mythologies and tales, Indian and African. Is co-organizer of the Festival of storytelling Carioca.

The artists take turns with guitar, ukulele, flute, accordion and percussion instruments, tacking the narratives with folk songs and public domain, and attracting the public to participate of the narratives. The company over the river is formed by the artists Jujube & Ana Nogueira, is in activity for more than 15 years.

The show "once upon a time…"gathers oral histories of three continents that are part of our imaginary brasileiro: Europe, Africa and America.

Anansi and the box of stories -a small steppe African villager climbs to heaven to ask god to share Niame your most precious.

The frog and the Princess -a typical European fairy tale, where the nobility interact with a cold, fat frog in the.

Sleazy Dick -other fairy tale, where amazing things happen. Animals and the landscape are characters that speak and interact with the protagonist a little chick take a complaint to the King.

Juca and the Snake River – a tale of the North which merges the imaginary Indian characters with references from the Riverside population.

The staging relies on high-impact visual props with great humor, music and colorful. Originally presented at the 1st biennial of Manaus in 2012 and now staged with educators of the performing arts group of the CCBB Educational. Daniela Chindler script and Augusto Person.

Interactive stories: The beautiful and the inside out of things
Kiara Land
Saturday, 10 October, às 17h

Interactive stories are an invitation for participants to share their experiences. The idea is to invent new directions with empathy and belonging as the stories are. In "the wrong side of things," crossed with deeds of Heroes which differ in a lot of the most common type found in folk tales. Our hero is naïve and distracted, is intertwined, fails, wrong in their courses. In your weakness, WINS! Thanks to luck, talent and sincerity disconcerting. It is both amazing and like all of us.

Kiara was born in São Paulo and is storyteller from 1998. A writer with two books released, "The girl child" parents of the Publisher Attica and "Hocus pocus" gift a father of Cia das Letras. There are 15 years created the method of narration called open history. Are collaborative narratives that happen with public participation. Listening and improvisation techniques are the key features of this way of narrating stories.

Dropping the bugs
Chest that counts and Sings
Sunday, 11 October to, 13h

The interactive spectacle has as its central theme the care with the other. In the story "the Ladybug", the bug gives a lesson of kindness when loans all your closet for your friends to join in a party. In "The Fruit With No Name", the forest animals are hungry and need to eat. In the story "the Owlet" makes us reflect on what is the beauty. With Silvia Fernandez and Marcelo Pilgrim.

Carpets and cloth books created in Brazil and Peru are the stage for fantastic tales of three different continents. Edison Mego and Warley George narrate: "The mystery of the Pachacamac Islands" (South America), "Jojo the cow" (Europe), "As the Sun started to shine in the world" and "How the rabbit won the whale and the elephant" (Africa).

There are 17 years, the group creates and uses rugs, panels, bags, aprons, boxes and cloth books as popular tales and scenarios of various origins. The group is also international reference in dialogue between orality and fine arts, intersections between text and textile, and plastic manifestations that people create as scenarios for their narratives.

Tales are presented that permeate the popular imagination since a long time and that lead the viewer of any age to reflect on human relations. In popular narratives, in an ironic way, the most varied feelings appear: fear, envy, valentia, Smart, and many other. These stories bring a reflection about the coexistence and the relationship among men. Collected stories by leading folklorists, such as: Silvio Romero, Câmara Cascudo and João da Silva Campos.

Augusto Pessôa works as storyteller from 1994 featuring shows and conducting workshops for various capitals of Brazil. He is the author of the interprogramas "the storyteller" on TVE, served after on TV Brasil and Futura. As a screenwriter he adapted for the stage the folk tales.

A spectacle with songs, small Brazilian folklore narratives and toys Sung that makes room for the encounter between the young and the playful. The narratives and the songs take viewers to the enchantment, the exercise of memory. The wheel of stories opens with Indian legend that explains how did Jaguars won the dots that has until today. In “The Bug Folharal”, Indian too, the monkey will try to drink water in the House of the Jaguar Owner. Finally, “The history of Coke” going to tell the adventures of a boy who goes walking, winning and losing objects by path, in a memory game. All the narratives are interspersed by songs from Brazilian folklore played the guitar by Gustavo Pereira.

Silvia Castro is an educator, actress, interpreter, storyteller and believes in the transformative power of the word. Like I always say: “Telling stories is to be there and go beyond…”

The CCBB Educational displays the contents of the exhibits on display in the mediated visits, laboratories, music activities and storytelling. Listening to stories is a transport to another universe, where the listener becomes part of the life of a character and happens to be someone that he's not in the everyday world. There's no better way to live experiences? Through fantasy we bring issues present in the exhibitions and the introducing of playful way.

Diving into the world of Greek Mythology, where we can experiment with new sonorities to tell the stories of fearless heroes, disputes between gods and humans, loves nearly impossible or flying adventures. The myth of the birth of the Minotaur and your battle with Theseus, the dispute between the Weaver Arachne and the goddess Pallas Athena, the meeting of Eros and psyche, the Dream of Icarus and the Midas touch. The meeting determines that myth gets into the wheel.

Designed by Luciana Zule and composed by Maria Coelho and Rudi Garrido, the Mosaic Group is formed by actors, musicians and educators interested in the art of storytelling. Since 2008 produces and conducts sessions and workshops, focusing the research dialogue between the oral narrative and instrumental music.

Marcela Carvalho is storyteller and embroiderer. In their presentations and narratives made fabrics. The repertoire: “Legend of the Hummingbird” and “Flower in her hair”.

Are oral narratives, interspersed with tales credit, will be narrated for children stories of fear as the Witch of the river and The “arms” ghosts of Benita Prieto. At the meeting there will be a lot of public participation with the yellow Castle of Malba Tahan and Mary goes with the other of Sylvia Lucia.

Benita Prieto is a member of the Morandubetá Group. Has been submitted by Brazil and countries like Spain, Portugal, Uruguay, Colombia, Venezuela, Cuba, Chile, Argentina, Mozambique. Creator of international symposium of storytellers. Is President of Brazil and Account Coordinator Institute of International Red Cuentacuentos. Codex creator Club. 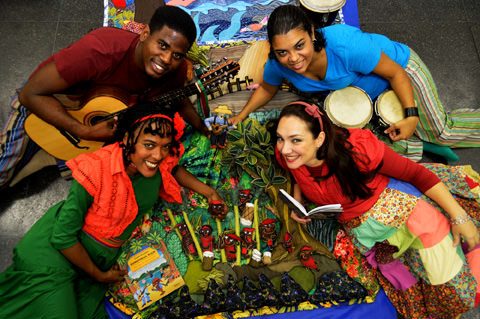 On nights of the full moon, meetings take place in the Woods, in the cemetery and in the three-dimensional mats Sewing Stories. The sound of the viola caipira, with the beats of the drum and guitar fever, creepy and mysterious creatures got free somewhere in the popular imagination. Direction and screenplay by Daniela Fossaluza, inspired by the tale of Fabio Shadow. List: Daniela Fossaluza, Denise Goneve, Cindy Ribeiro and Cezar Augusto Pereira.

The Sewing stories is a collective of artists who will complete 15 years in business, creating from the idea of transforming books into three-dimensional tapestries stories that tell stories. Rugs are the scenarios where the Dummies live their adventures through the hands of storytellers.

Distribution of passwords: 30minutes before the activities, by the CCBB Educational on the ground floor

Previous: Read Borges in the exhibition held by the AAPP and Interart Inter TV
Next: Barbatuques launches new album "Ayú" at Sesc Pinheiros, in concert with participation of Hermeto Pascoal