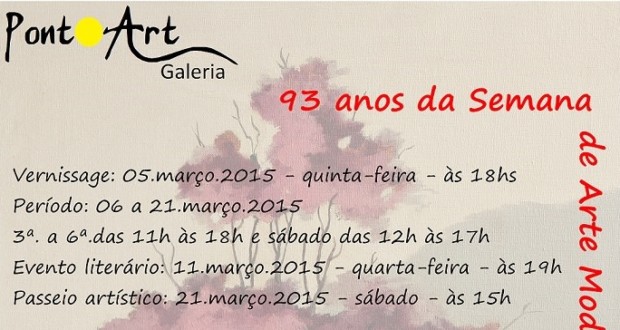 "93 Years of the Week 22", PontoArt Gallery by Edmundo Cavalcanti

This exhibition is already a milestone in plastic arts of São Paulo and Brazil, and already part of the artistic calendar Sao Paulo.

This year, could not be otherwise. The last exhibition and artistic stroll through the streets of Vila Madalena in 2014, was a success, I was honored to take the tour, leading to the dear friend Acacio Pereira work, but this year I will participate and take my work. There will also be a literary event.

The PontoArt Gallery is inspired by the Modern Art Week to celebrate the “93 Years of the Week 22”, with group exhibition, artistic and literary tour event. 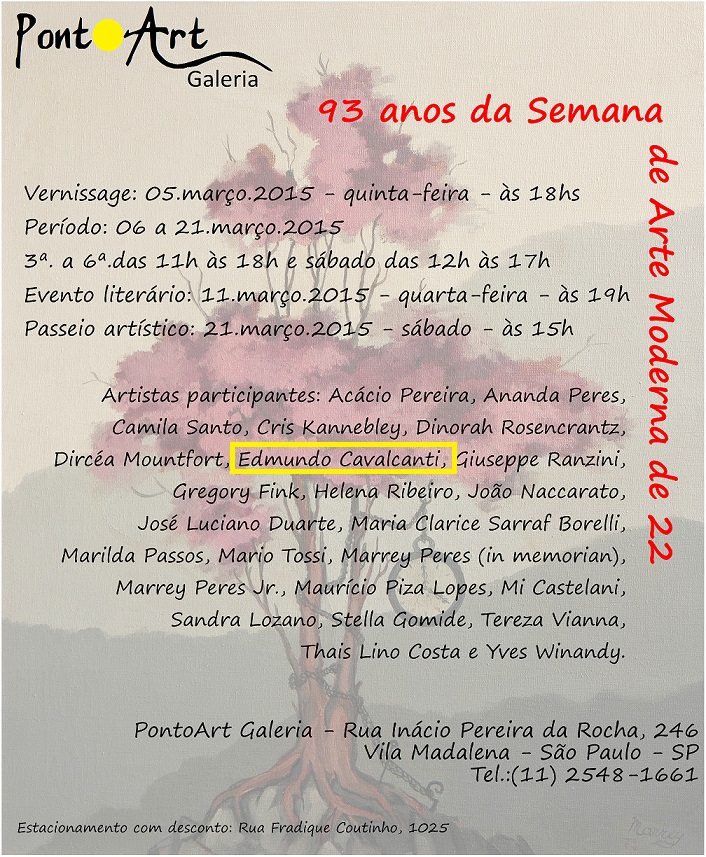 Inspired na historic week 1922, better known as the Modern Art Week, a Galeria PontoArt, the third consecutive year, performs the day 05 to 21 March 2015, a group exhibition with the active participation of artists, which together with the Gallery, celebrating the anniversary of the event, a kind of homage and that is including the exhibition theme own. Try-se two “93 Week 22 years”, which took place at the Municipal Theatre of São Paulo, between days 13 and 18 February 1922.

Mário de Andrade, Oswald de Andrade, Menotti's Picchia, Anita Malfatti and Tarsila do Amaral were the main precursors of Modern Art Week in Brazil, which also featured the presence of Brecheret, with their works exhibited in the lobby of Theatre. They knew express their dissatisfaction through social events, political and economic of the time and, mainly influenced by the avant-garde movements, expressed their ideological positions, through their artistic creations, the paint is, architecture, in music, in Sculpture , in the literature including poetry, folklore, among other forms of art. 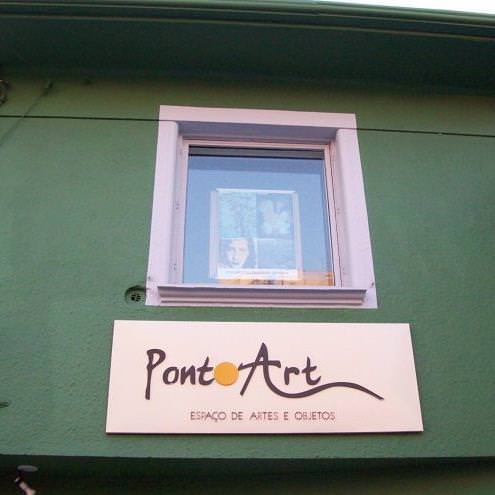 The artistic production brought by the modernist movement is still an important reference to the present day in Brazil, is the depletion of the academic style, is the Brazilian cultural transformation of the time, during the early twentieth century and the late 1920. The highlights of the period were to issues of national research; the role of the city of São Paulo, the formation of modernism in fine arts, the route of European artists based in the country, the influence of Paris, the contributions of expressionism, Futurism and Cubism, among other topics. Anita Malfatti brought from Europe, avant-garde experiences that deeply marked their work and 1917 held that became known as the first exhibition of Brazilian Modernism. 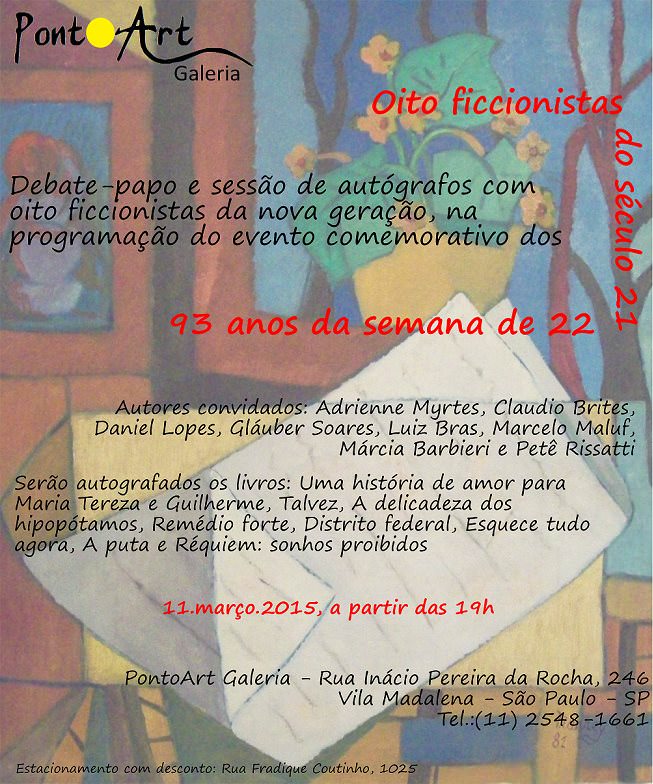 The historic occasion adapted by Gallery, has an opening cocktail, on 05 March, when the establishment welcomes artists and the visiting public. On 11 March is the time of important literary event, “debate chat and autograph session” which includes the participation of eight fiction writers of the new generation, a partir the 19h. Authors guests, are: Adrienne Myrtes, Claudio Brites, Daniel Lopes, Glauber Soares, Luiz Bras, Marcelo Maluf, Marcia Barbieri and Pete Rissatti. 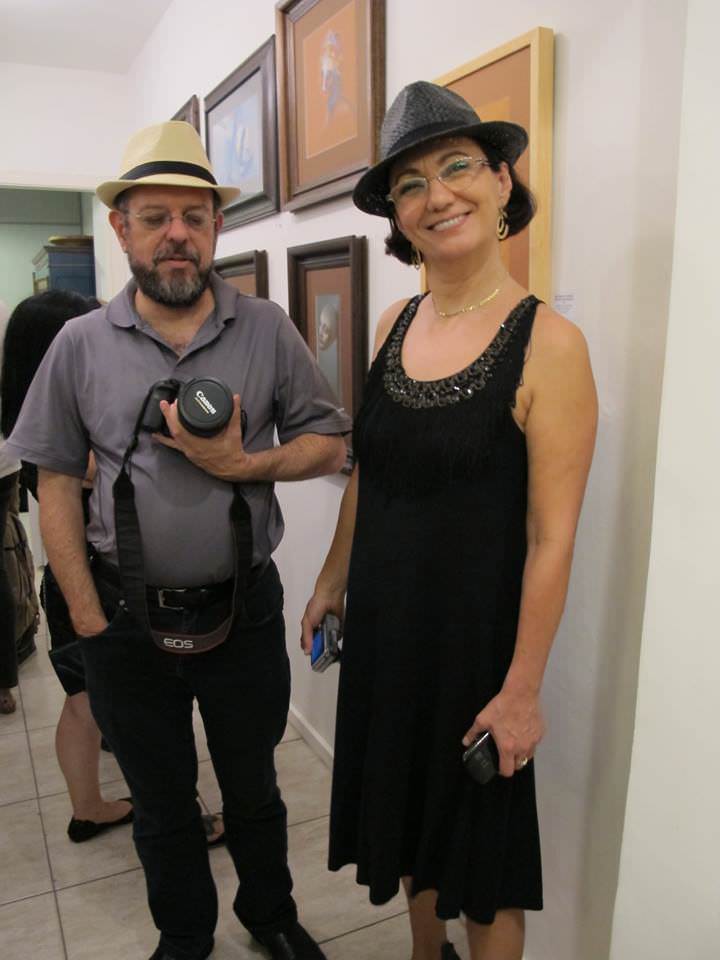 For the artist and gallery owner Marrey Peres Jr., Gallery owner of PontoArt, “A Week 22 was the biggest event processing and release of Art ever in Brazil. It was a break in March of the paradigms of the own Brazilian critical. So it is important to remind her and celebrate, so we can evolve the culture and coexistence among people.” To his wife, the gallerist Lucília Giordano, “the idea we left the streets in the works for a ride aims to approach the artist of your audience, to innovate the way of exposing the works of art and have fun in well, of course”!