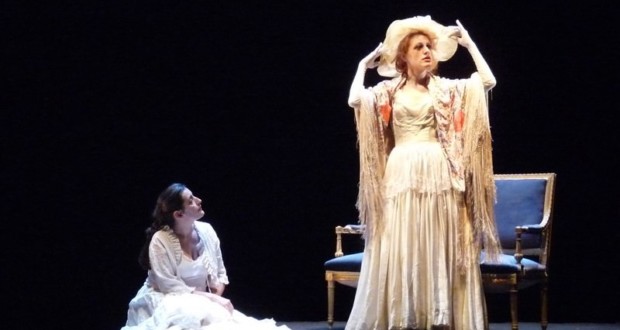 Dramatized reading of ' Memories of two young wives ' will be held in French,
no translation, in the Auditorium of the Alliance Française Botafogo

The Alliance Française of Rio de Janeiro presents on Thursday, 08, às 19h30, the dramatized reading of the novel Mémoires de deux jeunes mariées "'-on translation into Portuguese, ' Memoirs of two young wives ' – by the French writer Honoré de Balzac. The event will be held in the Auditorium of the Alliance Française Botafogo, with free entry, in French, no translation.

The epistolary novel was published in 1841, in the form of novel in the newspaper La Presse and two friends of the 17 at the age of 30 years, leaving the convent and take very different destinations – Louise de Chaulieu (played by Hélène Hiquily) you will spend your life searching for love; the other, Renée de Maucombe (performed by Jacqueline Ruddy da Silva), looking for a husband.

This exchange of correspondence between two young people remains current, even though the two heroines have lived in the early 19th century, merciless season for women. Renee, the wise and voluptuous provençal and Louise, the wonderful Parisian reckless and passionate, each is in its own way the traces of a George Sand whom Balzac dedicated this text and who was an admirer and friend of unconditional.

The work expresses the human truth and the truth of women of Balzac: "The text illuminates us and mobilizes for a future where the female will be treated with more humanity. So Balzac understood, by dedicating this documentary work to Georges Sand ", Jacqueline Ordas account, responsible for the direction of the show.

The places are limited by order of arrival and passwords distributed on receipt of the Gallery 1 hour before the event. On 10 in October the company Théâtre du Matin follow the show for presentation of the Alliance Française of Vitória-ES.

It is the only institution in Brazil authorized by the Embassy of France, to apply the tests that give access to international diplomas DELF and DALF, recognized by the French Ministry of National Education. The Alliance Française is also official examination centre for international testing validity of two years TCF (The French Knowledge Test) and TEF (French Assessment Test) and the national test valid for one year Capes (recognized by agencies CAPES and CNPq MEC).