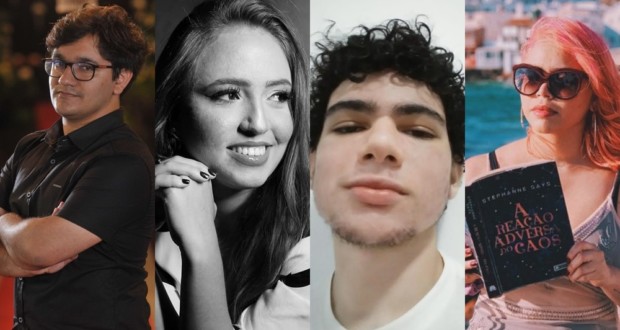 From young to adult, editorial market receives new authors in 2021

The publishing market is constantly receiving news, mainly from new authors who propose to take unpublished stories through their debut books. Aiming this reality, we selected four writers, Youth and adults, who released their works in the last months or who are preparing for the first release within the literary medium.

Unlike all the authors on this list, the physiotherapist Leandro Chagas has not released his book yet, but it is already preparing and warming up its future readers on their social networks. “Diaspora” marks the beginning of the fantasy saga and in the first book, which will be launched by Editorial Group Coherence, we follow Trizno, apprentice of the most powerful magicians in the kingdom, being accused of murdering his masters and stealing legendary weapons. To escape hundreds of soldiers, he uses the oldest magic: to Diaspora. Taken to another world, realizes that he lost the relics he stole from the kingdom and finds out that the people of that civilization were already waiting for his arrival. Willing to understand what's going on, the protagonist needs to delve into his past, but the search for the truth costs a lot of blood.

The young Pato graduated in Architecture and Urbanism, from 23 years, launched in March “The Duke of So Far”, his debut book that brings Brazilian culture and folklore into the plot inspired by Alice in Wonderland. In the book, we accompanied Júlia Rodrigues in an accident and waking up in an unknown house, and without knowing her current reality she is frightened to realize that everyone seems to know her. Together with your new friend, which promises to take you back to your city, she faces great adventures that pass between spells and abductions to find the duke of So Far, and beyond that, aprende que mundo não é um conto de fadas.

Since childhood writing short stories and poetry, Breno S. M. debuted in the editorial market to 16 years with the book “The Apartment Girl 45”, an investment suspense launched in March by Editora Livros Prontos. The story revolves around Detective Ada Lovelace, well known for her intelligence, investigating the death of a young woman in a small condominium. Using their techniques popularly considered to be unprofessional, she embarks on a case that initially appears to be a suicide, but that throughout history points to a murder watered by intrigues and mental games, which the evidence indicates several suspects.

The film student is the only one on this list who has not released a work for now, but, even so she is classified as a beginning author. Released in 2019, the book “The adverse reaction of chaos” revolves around Luna, a girl who got kicked out of school and who hates Nietzsche, precisely because of his philosophy that there is no absolute truth. However, the young woman goes through moments of self-questioning after finding a stone that came from space and being taken to another planet, and, living a new reality that confronts what she swore to be an absolute truth. This time, the writer prepares for the launch of "The Consequences of Orbiting a Black Hole", continuation of the story.