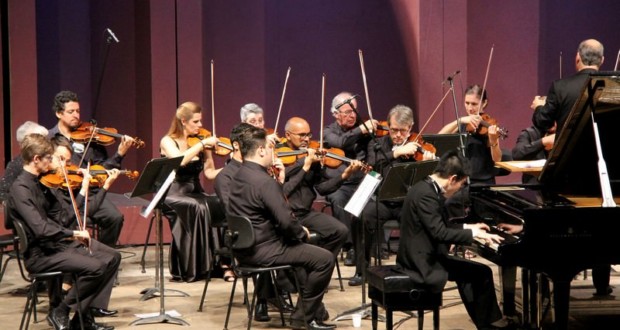 Chamber Orchestra of the city of Curitiba. Photo Disclosure.

The Chamber Orchestra of the city of Curitiba opens the presentations of the III Biennial Music Today, International Festival of contemporary music which takes place in Curitiba, establishing a dialogue between the Brazilian musical production and the best has created around the world, in this area. The concerts take place in the chapel Santa Maria, the Friday 8:0 pm (14) and at 6:30 pm on Saturday (15), under the baton of the conductor and composer Gaucho Márcio Steuernagel.

Along with the presentations, It also happens the III National Contest of Music Composition Today, dedicated to the promotion of production of new orchestral music by Brazilian composers. The repertoire, the three finalists in this year's contest, selected anonymously by a specialized jury. The winning work will be chosen by the public and jury present in concert.

Opening concert, the Chamber Orchestra of the city of Curitiba performs the Latin American debut of Ramifications, of György Ligeti (1923-2006) -certainly one of the competitors to the distinction of most important composer of the 20th century. Dense writing, polyrhythmic and polyphonic-branched, as its title suggests – this work leads to writing textural of Ligeti, based in sound networks, to the universe of microtonalidade.

Represents the production itself and Curitiba ' iconic large silences largest high ... There are in ' (2014) Harry Crowl (1958), work dedicated to Chamber Orchestra of the city of Curitiba and premiered last year conducted by Alessandro Sangiorgi. The title was taken from a poem of Fernando Pessoa, under the heteronym of Álvaro de Campos, in which the author makes a reflection about the sounds that disappear overnight from the perspective of a resident of a building.

Complete the concert STEMS, Lunsqui Alexandre (1969) -work commissioned by Chelsea Music Festival (USA, 2014) -and La memoria del agua, of Aurelio Edler-Copes-order Angelo de Falla Chair Award 2007, revised between 2007 and 2009, dedicated in memoriam to the brother of the composer, Rodrigo. Members of a small Galaxy of Brazilian composers who made his career abroad, where are widely recognized, touched and winners, Lunsqui and Edler-Copes Crown the concert with some of the best in concert music today.

Márcio Steuernagel -Born in 1982, Master's degree in music from UFPR, graduated in composition and conducting by EMBAP and a Bachelor's degree in music from UFPR. He studied conducting with Osvaldo Ferreira, improving itself in courses with Daisuke Soga and masterclass with Kurt Masur. Received the first prize in the national competition of Composition Michel Debost (2005); the prize Funarte, In XVII contemporary Brazilian Music Biennale (2007), and the prize Funarte classical composition (2010). He was a fellow at 40° Winter Festival of Campos do Jordão (2009), taking lessons in composition with Stefano Gervasoni (Conservatoire de Paris), and selected for the Composition Workshop with Friedrich-Schulkowski, sponsored by the Goethe Institut in Córdoba, Argentina (2009). In 2011 He was the Executive Officer of the 1st Biennial Music Today, international contemporary music event in Curitiba, and 2013, It was Composer in residence at the Visby International Center for Composers, Sweden. Currently, directs the Madrigal Ars Iubilorum, He is a founding member of the Ensemble entreCompositores, Professor in the school of music and fine arts of Paraná and UFPR conductor of the Philharmonic Orchestra.

The Biennial -For the third time the Ensemble entreCompositores in Curitiba the biennial Music Today – International festival of contemporary music, complemented by the Winter Seminar of contemporary music in Curitiba-academic arm of the biennial. With institutional support from the Federal University of Paraná, production of Vlaanderen cultural productions, in partnership with some of the most important cultural institutions in the city, as the Cultural Foundation of Curitiba, School of music and fine arts of Paraná, and Positive among other University, the biennial Music Today continues, After the positive effects of the first editions, the process of affirmation of Curitiba city reference in Brazil within the international new music scene. The biennial Music Today focuses on the dialogue between local musical production – both of Curitiba and Brazil as a whole – and the youngest has been done internationally in music, striving always for the musical quality of the concerts. The Biennale promotes, and, the meeting between internationally established groups and Brazilian composers, local performers and new aesthetic, intensifying the permeability in musical creation, mobility and the offsets, typical characteristics of today's music scene. In its third edition, the biennial Music Today demonstrates its transformative potential of Curitiba and music scene of Brazil, Affirming the strength and renewed creativity of new music.