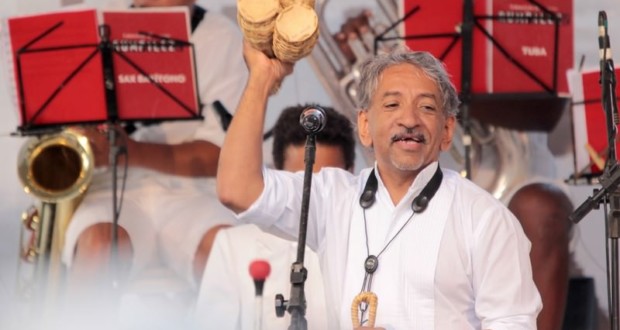 The Bahian composer and researcher Letieres Leite comes to Curitiba to deliver lecture in town, This Friday (02), at 1:30 pm, at the Conservatory of Brazilian Popular Music. The activity "General Approach on the Percussive Universe Baiano-UPB Method by Letieres Leite" aims to bring the public the music of Afro-Brazilian and Afro-Bahian array, its historical aspects and its applicability. The activity is free and open to the public.

In this talk, the instrumentalist and mastermind of OrkestraRumpilezz uses the UPB method, developed by him, relating to oral tradition and the tradition of European music written in approximate proportion to the transmissions of rhythmic designs and the Bahian Percussive Universe clefs and who do not find a graphic traditional musical transcription fidelity.

With two different times, the workshop draws in its dynamics the introduction, with historical contextualization, and deepening, with the observation of learning oral claves and surroundings.

For the public, This activity is the possibility of empowering a broad and decisive tool for its various musical constructions, by enrichment of rhythmic approaches and deepening of knowledge about music Afro-Brazilian matrix. The proposal hopes to convene broad audience of music students, instrumentalists and interested in the subject.

The creator and composer of the percussion and wind started Orkestra its history as a performer, performing with numerous musicians and festivals – artists such as Gil Goldstein on 1990, Paulo Moura in Montreux and Jazz Festival Zurich in 1992, Alfredo de la Fé (European tour 93) and with the groups Hip-Noses (Herbie Kopf) and Anteater. Showing the Rumpilezz as your copyright work in 2006, the player brings the bigband as business card for your ideas, feeding projects and research that seek to catalogue and systematize information on the Bahian Percussive Universe (UPB), the African-Bahian music and, in particular, the educational character that favors all this knowledge. In the last five years, Letieres was showing his UPB method in workshops and lectures around the world, with emphasis on residence in the BerlinerJungend Jazz Orchestra (Germany), the workshop at the San Jose Jazz festival (USA) and master classes at City Collegeof New York (USA) and in the New York Library for theArts (USA).

Currently, the researcher devotes his method teaching of UPB array Afro-Bahian, as educational Director of the youth training project Rumpilezzinho, artistic-pedagogical coordinator of the training centre at the FUNCEB Arts – SECULTe art consultant and Art Design Education in the Resumé, the municipality of Salvador.