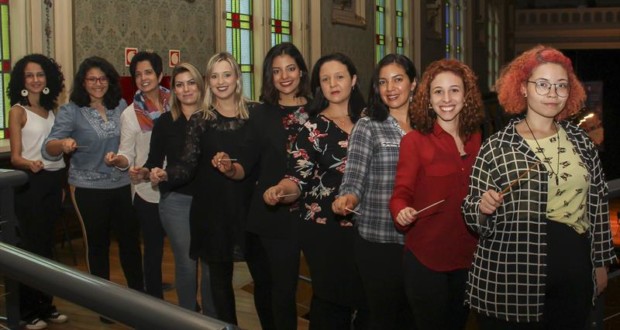 Hi everyone 20 attached to the Regency class Orchestra of the 37th Music Workshop are women. The number reflects the gradual increase in female presence in the field of orchestral activity, not only in Brazil but in the world, and the importance of Curitiba cultural event as a gateway to the professionalization in the area.

In previous editions, the Curitiba Music Workshop also received other students who are regents today. These include Mariana Menezes, which is acting in the Federal District; Catherine Araújo, in Goiânia; e Alexandra Arrieche, in Antwerp, in Belgium.

The group this year is formed only by Brazilian. They are Karen Zeferino (Maringa / PR), Melissa Paiva and Larissa Macedo (São Bernardo / SP), Giovanna Elias, Thais Rodrigues and Miriam Constantino (São Paulo), Wassi Carneiro (Araras / SP) and Raphaela Lacerda (Santo André / SP). They came to the course given by Maestro Abel Rocha, conductor of the Orchestra of St. Andrew and whose assistant a woman: Natalia Larangeira.

"When I started to attend the event, in 2009, and I were, tops, more two. Certainly the market was much closer to those before us ", compares Regent, referring to established names such as the Brazilian Ligia Amadio, conductor of the Philharmonic Orchestra of Montevideo, Uruguayan capital, and the US Marin Alsop, former head of the São Paulo Symphony Orchestra and current conductor of the Vienna Radio.

The footprints left by the oldest in the area, says Natalia, They are simply erased from history. "Chiquinha Gonzaga was also conductor. But how many people know it?”, notes, referring to the artist who is known as a composer of hits from the nineteenth and twentieth centuries and which are sung to this day.

At the age of 32, the conductor acted as regent invited the Chamber Orchestra of Theatro São Pedro, in São Paulo, and 2019 the second was placed at the Second International Opera Competition bauge, in France. Sunday, at the end of the 37th Curitiba Music Workshop, will conduct the Concerto for Trumpet, Argentine Gerardo do Gardelin, with Professor Daniel Crespo. The show starts at 20h, at the Teatro Guaíra.

All this trajectory, Natalia account, It is the result of much study, discipline – even I am the mother of a boy 5 years, accompanying in their professional commitments and also came to the Music Workshop. While the mother works, Lorenzo participa de atividades da Oficina para crianças no Passeio Público.

"Motherhood was never a problem for me. Never region as much as at the time of pregnancy. Three days before delivery I was working, back 40 days later and continue investing career ", she says, contrary to common sense that closes the career of regents who become mothers.

Other restrictions are imposed on the rise of women in orchestral conducting and, a rigor, equivalent to those identified for the various careers. "The simple fact of being women, independent of all our technical capacity, already puts us at a disadvantage. We can not make mistakes and we have to kill not one but two lions a day, break even stone ", Macedo summarizes Larissa, one of the eight students in the Regency class Orchestra.

Dealing with the musician who misses purpose notes, just to test if the conductor is attentive, or the instrumentalist who does not accept to be ruled by someone of the same gender are examples of typical career obstacles. Also current is judgment by appearance – the type of clothes with more feminine features used during concerts and the softer gestures to govern – and not by the technique and the idea that the place of ruler woman is just in front of a coral.

To cope with the restrictions imposed on women in this area too, agree the students of the Music Workshop, not just keep using technical, knowledge and discipline to continue making room in the gym and conventional orchestras. "The way, for us, is taken and form new orchestras. In addition to space for us, We create market for musicians in general ", suggests Natalia.

Previous: In memory of Holocaust, the Italian Institute of Culture of Rio performs single session of the documentary "Hell Mittelbau Dora", that diretora italiana Mary Mirko Soap, Monday, 27, at the Cultural Center of the Judiciary (CCMJ)
Next: CORPO_NÓS: SEA promotes free activities developed by the Rio suburbs youth