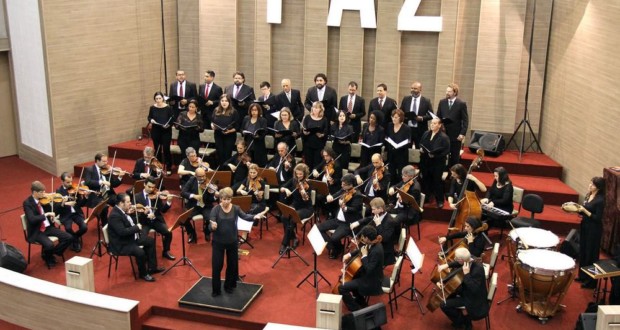 In 2016, the social work of the Camerata Antiqua of Curitiba intensifies with the increase in the number of concerts, a month in the churches of 10 presentations by the end of the year. "All parishes should have the opportunity to receive the Camerata, I restrained myself not to cry, I am deeply touched. Listening to these songs, I felt like doing a prayer to God ", says Maria Magdalena, during the concert in our Lady of Lourdes Parish.

The Repertory ready for Bacacheri Baptist Church reflects the characteristic and the musical proposal of the project being a history of the great classical works of foreign and Brazilian composers, representative in his time, such as: Johann Sebastian Bach, George Friedrich Händel, Heitor Villa-lobos, Antônio Carlos Gomes, Mozart Camargo Guarnieri and Edmund Villani-Côrtes.

Mara Campos joined the Villa-Lobos Project of Choral – INM/FOUNDATION and was a teacher of conducting and Choral in 20 editions of music workshop of Curitiba. Guest conductor of the BBC Singers English choirs, New College and The Sixteen, Vox set Brasiliensis, the Concert Choir of the Biennale Concrete installation "Like plot" and the recording of Villa-Lobos CD, in Paris (France), answered by creation and musical direction of the shows ZAP-the Summary of the Opera and chorus of contraries- 22. Mara Campos created and coordinated the festivals of Choirs of the Alliance Française, Church San Francisco, Grupo Pão de Açúcar and the meeting of Choirs Camargo Guarnieri of the Festival of the Theatro Municipal of Sao Paulo. Integrates the project moving Corner next to elementary schools in São Paulo SESI, and teaches conducting and choral music Cantareira faculty and PHYTO-Villa-Lobos Conservatoire.

The Concert program in churches was conceived by the Camerata Antiqua of Curitiba as part of its community relations activities since 2002. To the present, There were hundreds of concerts distributed peripheral regions of the city, with thousands of people who have had access to this activity of the Camerata Antiqua of Curitiba. Regardless of the religious denomination of these churches, the Camerata visited with his concerts the most diverse religious denominations, as Catholic churches, Batista, Methodist, Mennonite, World Messianic Church, Terreiro de Umbanda of Father Macrae, among others.

Previous: On-site course: Missions-Rio Grande do Sul
Next: Samples “All time” and “You're the arrow” are opened in Periscope contemporary art (28/4)