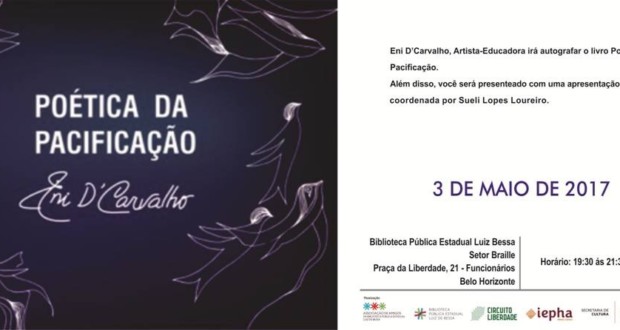 Work which is the fruit of work with high-risk communities,
performed by artist Eni D ´ Carvalho

In the middle of the century 21, many men, women and children are the fruit of the violence generated by various reasons. The peace often appears not to exist and is far from human being.

Was this painting that inspired the writer and Artist-Educator Eni D Oak ´ acting, during 15 years of your career, with children and adolescents in social risk areas. In this sense, held an artwork inspired by the peace in which promoted inclusive cultural activities with these people, allowing them to be protagonists of a culture of peace in the middle in living.

During the project in clusters, ENI worked the whole concept of peace. Values such as autonomy, coexistence, dialogue, dignity, equality, Justice, respect, solidarity, among others were disseminated among the participants to be widespread and practiced daily.

All this project resulted in the book of poetry "Poetics of Pacification", the Public Library in the State of Minas Gerais in the day 3 May 2017 opens its doors to an autograph session. During the event, There will be exhibition of works of the artist.

The book of 174 pages , Editor: Romero Oak, Graphics: The fighter and brings 170 poems in six chapters divided into the following themes: peace; mysticism and art for peace; peace in the soul and culture of Brazil; agree to peace with the kids; peace is a walk and the human being, with the Earth and the cosmos. All the illustrations were created by the artist herself.

Beyond the book, the author bothered to write a Poetic CD that will be donated to people with visual impairment -connected to the project "Touch and feel", of your creation and performance.

Their Works, ENI highlights two important lessons: peace can be taught and peace can be experienced. "No one can change the world, but we can change a portion of it. This part we call ' I '. It's not easier or faster. But it is necessary and worth a try ", stresses.

Portuguese-Brazilian nationality and mineira de Ubá, ENI D ´ Carvalho is an artist-Educator, autodidact, known worldwide by the works focused on social inclusion of people with visual impairment. ENI is the author of the project "touch and feel" and "Angels messengers of peace", in developing tactile paintings, Reinventing communication and the breaking of paradigms for this public.

Eni's art has been exhibited in 180 places in Brazil, United States and Europe. His exhibitions have been seen in the Hall of the United Nations (UN) in New York, at the University of Aveiro, National Library of Lisbon, Museums of EPAL, among other. In Brazil, displays his work in disadvantaged communities access easy.

Previous: Virtual Bookshelf brings together over 3000 people throughout the day to celebrate World Book Day
Next: Renata Spallicci, to “Fit Executive”, talks about the inspiration for your book and on creating your Publisher