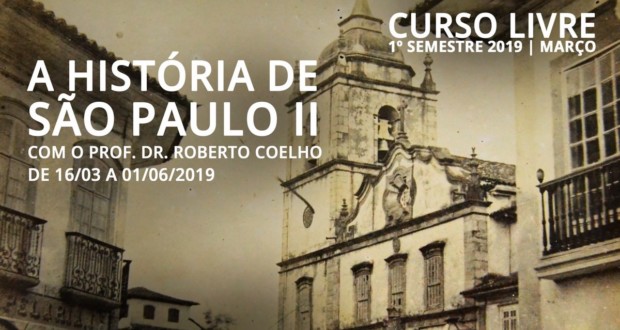 A Museum of sacred art promotes, the Free Course: “History of São Paulo - II” with the Prof. Roberto Coelho.

The course “History of São Paulo - II“, It proposes to hold a view of some historic neighborhoods of São Paulo. There will be eight regular classes and four classes in loco.

Our classes will be in place: The Bandeirantes Palace, Catedral da Sé, the Chapel of the Rock and the Latin American Memorial.

The construction of the city, your origin, municipality turned neighborhood, remote locations that have expanded the horizons of the Piratininga village, part of this study of history São Paulo.

Day 16 frame 2019
Class 1. Elysian Fields: designed the first quarter of the town. It arises in the expansion of the city center and the railway opening São Paulo Railway. It was the old Campo Redondo, or bouncer Mauá. receive, the neighborhood, the supply service of the company Cantareira.

Day 23 frame 2019
Class 2. Santo Amaro: a village that was rich and independent in the nineteenth century, because of the Spanish flu and many deaths, It ended up being attached to the city of São Paulo in the twentieth century.

Day 27 April 2019
Class 5. Bras: neighborhood on the figure of the Portuguese José Brás and construction of the Church of Bom Jesus de Matosinhos.

Day 8 May 2019
Class 7. Lapa: inhabited by Luis Domingos, known as coal, and his wife Dona Ana Camacho, which were its first residents. The arrival of the railroad and the development of the region.

Day 1 June 2019
Class 8. Morumbi: of a farm, in 1825, the neighborhood would receive the University Matarazzo, that later would become the Bandeirantes Palace, state government headquarters.

In the halls: meeting - Museum of Sacred Art of Parking São Paulo.

Prof. Dr. Roberto Coelho Barreiro Son It holds a degree in Advertising from Fundação Armando Alvares Penteado (1983), Master's degree in communication and semiotics from the Pontifícia Universidade Católica de São Paulo (1993) and Ph.d. in history from the Catholic University of São Paulo (1999). He is currently a professor and researcher at the Catholic University of São Paulo. He has experience in the area of ​​History, with an emphasis on modern and contemporary History; experience in media theory, culture theory, communication theory. He is a professor in graduate studies in art history, marketing and planning and development of products as well as Art Therapy language for Yung. In Graduate Senac is branding teacher, institutional communication tools, scientific methodology and digital marketing.