Home / Art / Lecture “A house built with words: The Museum of Innocence in Istanbul” Pedro Afonso Junior Vasquez by Nelson

Lecture “A house built with words: The Museum of Innocence in Istanbul” Pedro Afonso Junior Vasquez by Nelson

Posted by: Artworks in Art, Highlights, Events 1 of September of 2014 2 Comments 655 Views

Lecture “A house built with words: The Museum of Innocence in Istanbul” Peter Alfonso Vasquez by Nelson Junior

An unprecedented and exciting symbiosis between the literary world and the museum, is the arena that promises the photographer Pedro Vasquez, entitled “A house built with words: The Museum of Innocence in Istanbul”. The event takes place on 03 September, next Wednesday, to 15 hours, no Main Hall of the National Museum of Fine Arts/IBRAM/MinC.

Free entry, subject to the capacity of the room. 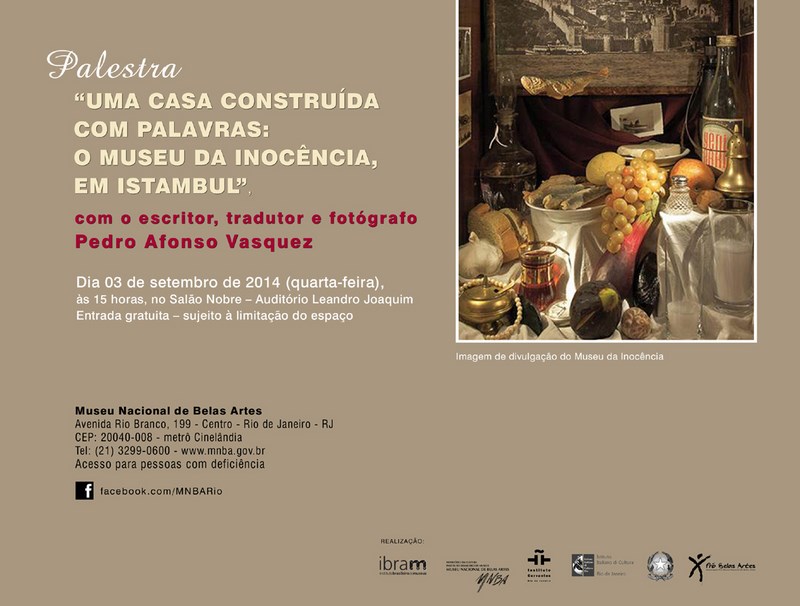 The Museum of Innocence, in Istanbul (Turkey)

Opened in April 2012, The Museum of Innocence is the first and only museum created from the writing of a literary work. Conceived by the Nobel Prize for Literature Orhan Pamuk, space has unique character within the museums devoted to authors and literary themes. This is because it was not installed in the former residence of a writer, was neither designed retrospectively to capitalize on the success of a classical work.

Unlike, a museum was born from the very act of writing, as explained by its creator, the Nobel Prize for Literature Orhan Pamuk: “I wrote this novel collecting, at the same time, the objects I describe in the book”.

In the book Museum of Innocence, released in 2008 and edited in Brazil 2011, by Companhia das Letras, the protagonist-narrator, Kemal, starts fetishistic collection of mementos of his beloved Fussun, impregnated stealing objects of his aura, as a cup of tea, earrings, clothing and even the butts (thousands of them) Cigarettes smoked it. And ends by organizing a museum dedicated to the memory of deceased.

In real life, Pamuk followed the example of his character, buying a house in the neighborhood where Fussun supposedly lived in fiction, to create a museum with the same title as the book, in which 83 display cases correspond to 83 chapters of romance.

Com Writer 24 published books, translator and photographer born in the city of Rio de Janeiro in 1954. Formed in the Cinema Sorbonne University, in 1978, became master Science Art Universidade Federal Fluminense in 2000. It is nonfiction editor Publisher Rocco. Was director of the Solar Jambeiro (Niterói, RJ), and responsible for creating the National Institute of Photography Funarte (National Arts Foundation); and the Department of Photography, Video & New Technologies Museum of Modern Art in Rio de Janeiro.