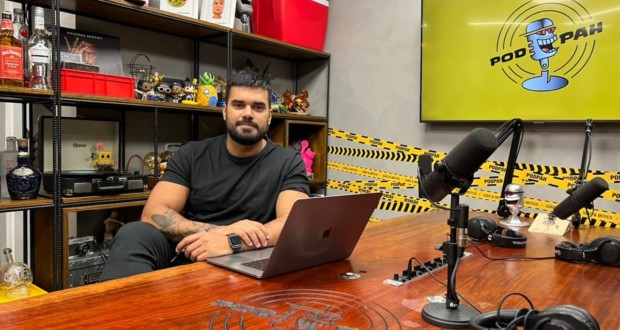 Brazil ranked 5th in the world ranking of growth in podcast production.

Brazil occupied the fifth place in the world ranking of growth in the production of podcasts, according to a study carried out in partnership with Ibope. According to the Brazilian businessman, Victor Assis, who is CEO of one of the most famous podcasts of the moment, about “Podpah”, “the podcast market is not fleeting. It’s the new way of getting information and consuming content.”.

The Ibope survey showed that 57% of Brazilians started listening to podcasts during the pandemic. For Victor, the podcasts will be, including, key piece in the next elections. “If social networks are already part of the strategy in the elections, podcasts will also play a key role”, explained.

“Another cool example of the power of podcasts, is that in the game Spider Man that came out to Play Station 5 the character named Miles Morales, in the game, get informed via an internet podcast. This reinforces that podcasts will increasingly be an information and entertainment format., reaching more and more people”, scored.

Research has also shown that the gateway to the audio world has some common motivations.. Most listeners listen to podcasts to seek entertainment on topics of personal interest. (41%).

Victor revealed that Podpah was the first podcast to bring big brands to the scene in Brazil. As he also explained that “the Brazilian market is still embryonic, since there are thousands of podcasts and over time some will consolidate and become a reference, whether for news, curiosities, sports and entertainment.”

The study shows that 48% listen while doing housework, 38% while browsing the internet, 25% enjoy the moment before bed, 24% put on headphones while working or studying — the same percentage do it while commuting between home and work or home and study —, 20% listen during physical activities and 18% are in the habit of listening while performing a self-care routine.

The survey highlighted that the consumption of podcasts is more frequent than expected: 43% of respondents are in the habit of listening to podcasts one to three times a week, given that 16% listen every day. In addition, 25% usually listen to an amount of one to two hours a day.

A businessman have experience in the job market: in your professional trajectory, has worked for large companies such as Bradesco and Edelman. In addition to having a strong relationship with the sport, since he was Marketing Manager at Palmeiras for six years, and was involved in the projects surrounding the main launches of the Confederations Cup in 2013 and the World Cup 2014.

The CEO also invested in academic training. He passed through the molds of the Anhembi Morumbi University, for the team management course at St.. Martin University of the Arts London and the ESPM branding course.

Before becoming a nationally successful entrepreneur, Victor had his work highlighted in the sports area as he participated in several projects together with major brands, like adidas, in a World Cup action, a PUMA, with the release of the Palmeiras shirt, e a XBOX, in a project that made possible the first collab of video games and football clubs in history.