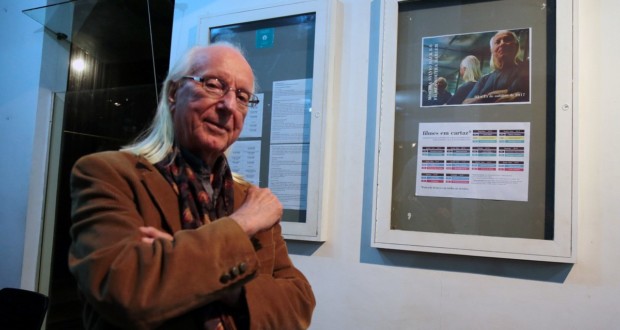 book launch on the Sylvio Back filmmaker at the Cinematheque. Photo: Doreen Marques.

Celebrated filmmaker Sylvio Back, who completed 81 years and has conducted 38 movies, It is being presented twice in October. His film Lance Maior, supplementing 50 years, appears in the Curitiba Cinematheque, This Wednesday (24/10), programming that begins at 18h with the launch of the book The Making of a Filmmaker: Sylvio Back in Curitiba Cultural Scene in Years 1960.

The book is authored by Rosane Kaminski. The event is open to the public and have the parental rating 14 years. As the title, the book deals with the cultural formation process Sylvio Back, outlining the ways and the difficulties that marked his career choice.

The time frame is marked, an extreme, for their arrival in the city of Curitiba and its "entry" official in cultural journalism, going through the experiences of film critic and production of short films and medium-length prior to the first feature. ends, at the other end, the production and release of the feature-length fictional Major Lance, filmed in Curitiba and in Antonina 1968.

This film marks the beginning of its projection in the national film scene, a socio-political context troubled. In it we see the representation of the instabilities of the city of Curitiba in the filmmaker's lens.

With view to 20h, the film deals with a love triangle between young people from different social classes living in the decade of Curitiba 1960.

Although the plot is based on romance and social ambition, a key element of the film is the city environment that streamlines. Part of the film's cast Regina Duarte and Reginaldo Faria.

The event is organized by the Cultural Foundation of Curitiba, Department of UFPR History, Research Online Art, Memory and Narrative (PPGHIS UFPR) and Group Navis Research - Center for Visual Arts.