In the 1980, the jazz had their explosion and height (c)OMO dance language in Brazil;
Today the technique is the basis of the musicals 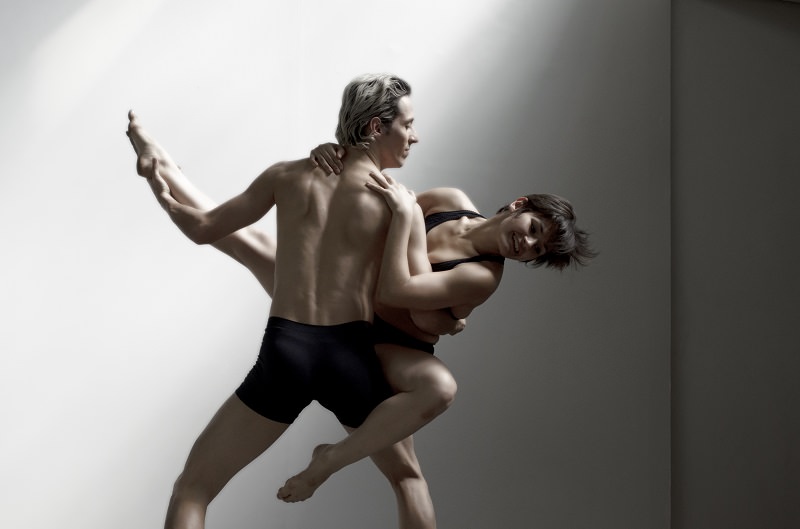 In scene, the choreography Daniel subverts early: is the woman who is born in a show that deals with love; in a scene Pas de deux to the sound of a sax solo, with jazz-filled movements

If the Red-fan Parrot Cia de Dança's crawling in your first steps – Daniel is your second job, the first was Begin in June 2013 -its leaders, together, add up 75 years of professional career devoted to dance. It's not little. With the direction of the choreographer Edy Wilson and general direction of Bassam Gouvêa, Daniel put the jazz on the focus and the result can be seen in the new show that the company Premiere day 29 October 2015, at Teatro Alfa (S. Benedict White de Andrade Filho, 722 – Santo Amaro, São Paulo).

To speak of love, Edy starts the show subverting science: is the woman who is born of man, and not the other way around. Hence arise the scenes that permeate the show about love ideal and the (false) idea of Prince/Princess charming (to) that knock on the door. From a tale of Moses Valdez, Edy Wilson created 11 scenes about the diversity of links established between the male and female genders, in how each relationship is love. To realize the idea on stage, Edy invited Ursula Félix to create the costumes, Raquel Balekian into the light, Tamara Gattamorta in music and Lucas Simões in scenography.

Helo Gouvêa and Edy Wilson are the two artists responsible for the ' child ' red-fan Parrot, completing three years of living in 2015 (its foundation was in August 2013). Both have followed different paths in dance, but from 2012 teamed up to create a company that would put the jazz on the agenda of the dance again. Thus was born the Red-fan Parrot Cia de Dança, who embraced jazz as language-propelled and is composed by 16 young dancers, with an average age between 20 and 23 years. In addition to the artists that comprise the Group, there is 40 scholars who integrate the project.

With 30 years of professional career, Edy Wilson his first professional experience in Assisi, with Charlie Lawrence, When I joined the Corps de ballet of the Municipal city. This town also graduated in physical education, What was quite important to your body maturing. In 1993, He traveled for the first time to the Joinville Dance Festival when he met Roseli Rodrigues (1955-2010), choreographer of breed Cla. and reference in the development of a brazilian language of jazz dance, marked by the creation of works who bet on polyrhythms and the orchestration of large groups. With her Edy rode choreography, won awards and in parallel, He served as student body of actors of the musicals “Vitor or Victory” (2001), starred by Marília Pêra and directed by Jorge Takla, and “Godspell” (2002), directed by Miguel Falabella, In addition to having participated in several shows by Brazil mounts.

With their copyright works, Edy won awards for best choreographer in important events such as the Art (2001) and the Joinville Dance Festival (2006), What secured a stake in Lyon dance Biennale, in France. "I had a very big influence of contemporary dance, but that came from jazz itself, that allowed the creation of a movement from another, that is, you never had to imitate or reproduce the same movement always. So my jazz got a little contemporary ", evaluates the choreographer that, the following year, featured Begin, his first job in front of the new group, and now is involved in the creation of Daniel. 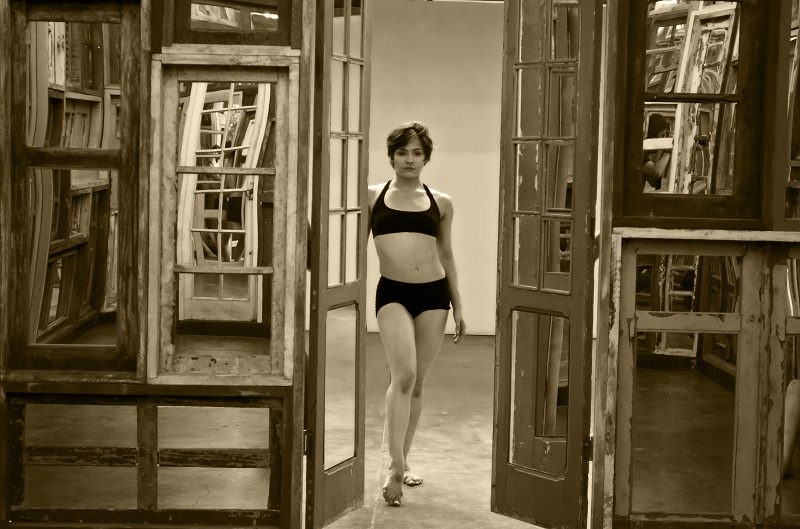 Helo Gouvêa complete in 2015, no less than 45 years of dedication to dancing. His passion for jazz came along with his years of Exchange with American Masters, in the middle of the years 1970 and 1980, When he traveled to America and brought to Brazil the new techniques disseminated by teachers from there. So it was with Lennie Dale (1934-1994), former dancer of the Broadway master Jerome Robbins (1918-1998) and creator of the legendary group Dzi Croquettes. Helo, at this time, traveled by countless Brazilian States creating schools, teaching, sharing technique that feed your soul: the jazz.

Bassam had teachers and partners of illustrious class – and icons of their generations – as Renée Gumiel (1913-2006), Kitty Bodenheim (1912-2003), Klauss Vianna (1928-1992), Joyce Kermann (1955-2006), Monica Japiassú, Ruth Rachou, among other big names. In the class with Renée, He was the youngest in class in which students were Thales Pan Chacon (1956-1997), Ivaldo Bertazzo and Celia Gouvêa. Years later taught classes for the actress Claudia Raia and businesswoman Ana Maria Diniz, Today your partner in the Studio red-fan Parrot, professional school that brings together over 1000 students in classes held, currently in two units of São Paulo: one in Brazil and another Avenue in Avenida Henrique Schaumann.

In the first place, the choreographer presents seven couples to represent a birth inside out: instead of being the woman that the man, is the man who is born a woman – an allusion to the myth of Adam and Eve, that opens the possibilities of relationship between men and women. In the vision of Edy Wilson, the attraction is what guides all along these two individuals.

There is a man or woman ideal for each person? The choreographer wants to deconstruct the idea of Prince charming who comes knocking on your door. The game of seduction to promises of eternal love, from the looks of desire, the Cinderelly to amorous and sexual binges; all these phases are crossed by love, by the gushing of sentiment, but lived and experienced differently by each of the genres. "The idea of ' Prince ' or ' Princess ' is still current for many people. There is a man/woman in head, but the search for this half idealized frustrates, Why don't never takes ", explains the choreographer.

"They all feel the same desire, but with different intensities. I want to show other nuances of attitudes of desire ", Edy says Wilson. The beginning of the show also features the vocabulary of movements with which will work from then on, as the jazz dance being scored in the construction of an absolutely contemporary scene.

A costumes developed by Ursula Félix aligns with this conception. For more than ten years she served as Creative Director of the workshop of Tania Agra, who, In addition to his mother, is one of the most prestigious costume designers of costumes of classical ballet in the country. To Daniel, Ursula develops a design that gradually migrates, every scene, earthy tones to warm tones, especially the heels that the dancers bear feet – a jazzy icon par excellence.

Known for his work on music creation dedicated to contemporary dance, the musician Tamara Gattamorta, the Bodily Arts Department at Unicamp, risk for the first time in the composition to a work of jazz dance. When mixing influences, He track a path anything obvious to the genre, defying the ear of the dancers, summoned by Edy Wilson to print their individuality in every move. 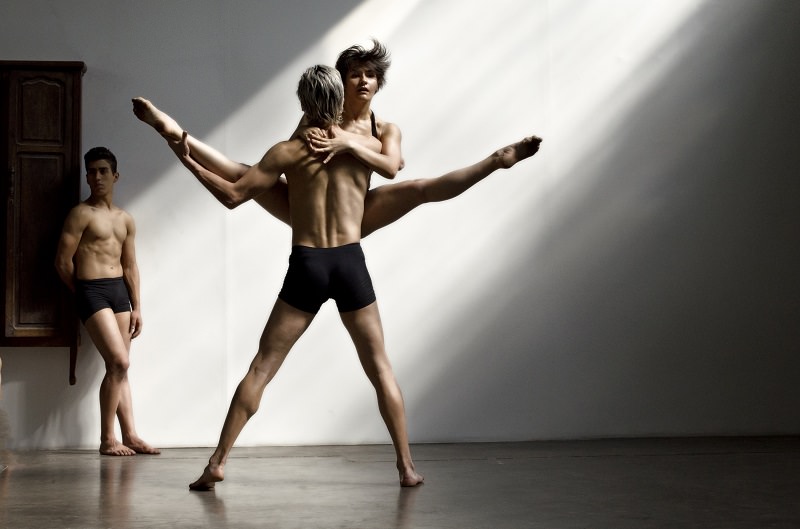 In 2012, HELO Gouvêa and choreographer Edy Wilson met during the art and the Joinville Dance Festival, in which acted as jury and teachers. Edy had just shut down the Race Cia de Dança, where served as Director. Conversation goes, wax off, HELO did the invitation so that he and seven dancers could work and rehearse in the Studio red-fan Parrot, opened for her two years before in partnership with Ana Maria Diniz. Rose so the cornerstone of Red-fan Parrot Cla. of Dance.

Then came the idea to assemble a show, Begin, It debuted in June 2013 making a reflection about the beginning of this new direction in the careers of Edy, HELO and the dancers. The choreographic signature that would be fetched already announced at this time.

The support won these first steps are the fruit of a unique dynamic that the company built for you to settle in a dance school attended by over 1000 students divided in two units, What has been positive both for the Group and for the own Studio. There is yet another Red-fan Parrot arm dedicated to technical training. In addition to their 12 dancers and 4 interns, the company offers free lessons to 40 talents chosen via audition you can experience a little of the work routine of a professional dance and specialize for the labour market.

Recently, at the invitation of the Secretariat of culture of the State, performed a movement by the São Paulo State, in the cities of Regent Feijó, Paraguaçu Paulista, Pebbles Paulistas, Ibitinga, Jaú and Treble, within the Cultural circuit of São Paulo 2015.

Now with the sponsorship of the Ita, the company is preparing for the premiere of his second work, Daniel.