Home / Art / Start the Year in the Museum Casa do Pontal 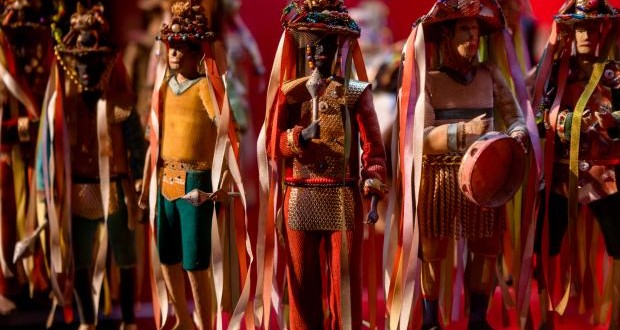 Start the Year in the Museum Casa do Pontal

Admired by foreign personalities like writer José Saramago, applauded by Brazilian musician Gilberto Gil and by Marta footballer, recognized as artistic and Cultural Heritage of Rio de Janeiro, the Museum Casa do Pontal is fundamental in Rio tours. Definitely a full ride, stunning and a must for adults and children. Located in an ecological site, from 5.000 m ², the space brings together 8.500 parts of shapes, materials and different styles of authorship of more than 300 artists, from 24 States of the country. Are kilometers of stories and customs of the Brazilian people, result of 40 years of research and travel by Brazil of the French designer Jacques Van de Beuque, owner of a very rich collection that covers the production of folk art from the twentieth century. Check out our special programming for the month of January 2016.

Currently, the Museum has the institutional patronage of Ministry of culture, the Government of Rio de Janeiro, Secretary of State for culture and State law of incentive to culture of Rio de Janeiro, the Valley, of Petrobras, the IRB Brazil Re, financial investment of BNDES, institutional partnership of the Brazilian Institute of Museums (IBRAM) and UNESCO and heritage education project sponsorship of Caixa Econômica Federal.

Walk Wheel to Pontal – The Brazil beyond the Postcard

Is much more accessible reach the charming Pontal House Museum with the tourism project Leme to Pontal – The Brazil beyond the Postcard – in partnership with the Eco Cultural Tours Curumin.

In the package are included the exclusive transportation, with shipment between the shores of the South, bar and Playground, bilingual tour guide specializing in key points of the path, 1 hour and a half visit set to music at the Museum, stop for photos in Prainha and return all starting points, until the rudder.

About of 53 works of popular artists are, until day 28 February, in the temporary exhibition Pictures and Brincantes-art and Performance in Popular culture. The show comes from the desire to pay homage to the masters of popular culture present in the Museum Casa do Pontal and celebrate three major achievements for the art and Popular culture: the promulgation of the Convention on the protection and promotion of the diversity of cultural expressions, by Unesco, in 2005, the recognition of the Jongo as Cultural Heritage and the living museum of the Fandango as a best practice for the safeguarding of the intangible heritage, by Unesco.

Among the many festive expressions that occur in Brazil the show features the Bumba-meu-boi, the Cavalhada, Porto Alegre, the Mamulengo, the sea horse, Jongo and the Fandango. High-impact demonstrations and social and cultural relevance, among other things, have in common the fact that they have been recognised and recorded as intangible heritage. Works by established artists like Nhozim, Maria de Beni, Lunildes, Captain Parker, Joao Cancio and important mamulengueiros such as Saúba, Joseph Lee and Pedro Mouth Rich composes the show.

In order to broaden the experience and expand the public's knowledge about the universe of popular culture the exhibition also has significant documentary audiovisual content. On display photos of Renan Cepeda, Marcel Gouterot, Lucas Beuque, Maria Mazzillo and audios with excerpts from performances of pastoral songs and mamulengo and maracatu. In addition to films about the cavalhada, Porto Alegre of Pirenópolis, the "killing" of the Bumba-meu-boi in Maranhão, the dances of fandango from the South coast of São Paulo and Northern Paraná, jongueiras communities of Tamandaré, Sao Jose Quilombo and Jongo da Serrinha (with emphasis on Master Darcy and Grandma Mary Jane).

Since its creation, in 1996, the Educational Program of the Museum Casa do Pontal already answered more than 220.000 participants. It consists of three lines of action: visitors-teatralizadas, travelling exhibitions and educational training of educators and sociocultural managers. The project is sponsored by the Ministry of culture, Rio de Janeiro/Municipal Culture, Petrobras and Caixa Economica Federal.

In January, month of school holidays, will be offered visits-teatralizadas to the permanent exhibition of the Museum Casa do Pontal and temporary exhibition and Brincantes Figures – art and Performance in Popular culture on demand for private schools. However, public schools and social projects can already perform the schedules of visits from the end of the month of January.

In the visits-teatralizadas children and young people, of early childhood education to high school, are received by art educators that invite you to a cultural trip, using languages like the music, the puppet theater, the string, the "story" of stories, challenges, ballads and verses. The scripts are tailored to different age groups and some themes can be prioritized during the visit, According to the pedagogical project of the institution.

Participants are encouraged to reflect on the Brazilian cultural diversity, relations between the field and the world of big cities, the migratory processes, the different professions, social practices, family relationships, the festivities and, yet, own issues to the universe of fine arts, the creative processes of artists and the materials used to make his sculptures. Are playful visits just to mess with our affective memory.

Educational visits last about 1:30 and are offered Tuesday through Friday, morning or afternoon. The Museum has accessibility for wheelchair users and people with mobility difficulties.

About the Museum Casa do Pontal

Considered by tourists who came to Brazil during the Confederations Cup as one of the leading museums of the country, According to a survey from the Embratur, the Museum Casa do Pontal is in activity for more than 35 years and brings together the largest collection of Brazilian popular art. Its collection, down by the River as the city's cultural reference, consists of more than 8.500 pieces of 300 Brazilian artists, produced in the twentieth century.

The Casa do Pontal Museum was chosen, in 2014, to represent Brazil in the Committee for the safeguarding of the Intangible Cultural Heritage of humanity by Unesco, assessing applications the intangible heritage of humanity, title recently received by the wheel of Brazilian Capoeira.

Free admission for the entire work force accompanied by one other person of companies WORTH, Petrobras, IRB Brazil RE and box, through the presentation of functional badge. Discount of 50% the input value to customers of Petrobras with the card card.