Home / Art / The children's musical is back at CCBB Brasília “The Fisherman and the Star”, after interruption 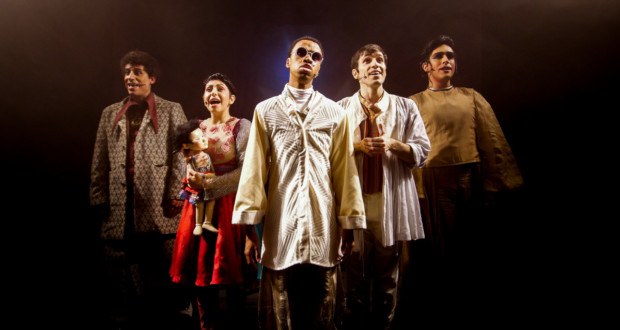 Children's musical "The Fisherman and the Star", list. Photo: Disclosure.

The Fisherman and the Star

The Fisherman and the Star tells the story of Fabiandro, a visually impaired fisherman who, in search of your missing love, shows that there is much more to see than just what we see. This is the essence of the children's musical that re-releases day 23 July (Friday), and go on to 8 August 2021.

The project, sponsored by Banco do Brasil, will have face-to-face sessions, with reduced seat limit, 40% of capacity, to ensure distance and the use of a mask during the presentation will be mandatory. From home, the public can also watch the show., which will be broadcast through the Banco do Brasil channel in www.youtube.com/c/bancodobrasil in the days 25 July, 1and 08 August, always at 16h, it's free.

O musical, with directed by Karen Acioly and text by Thiago Marinho and Lucas Drummond, has as protagonist a lonely boy who sees no reason to be happy. He, then, is invited by a 'messenger from the stars' to turn his gaze inward, in order to understand that there are things in life that don't need to be seen, just felt.

Carried by the messenger, the boy becomes the young Fabiandro, a sinner in love with a star, despite never having seen her. Both, fisherman and star, meet every night by the sea, where sing and dance.

One day, but, the star disappears. Decided to find her again, he goes on a journey to heaven. Next to you goes Hydrangea, a girl overprotected by her aunts who wants to see the world more than anything. What they both don't know is that, right behind, is the greedy couple Prattes Prattes, who plans to steal the star.

The role of the messenger is performed by Felipe Rodrigues, black actor, visually impaired and resident of the Pavão-Pavãozinho community, in Rio de Janeiro. in addition to actor, Felipe is a singer, keyboardist and composer. Rodrigues' character will guide Fabiandro. Felipe has performed in shows: The Compadecida's Report, O Magic of Oz, Blindness voluptuousness, among others.

"Performing in this show has been enriching because it brings me reflections. These are things that I can search within myself based on what the play is about. It is refreshing to reflect on everything that is inside of us and begins to be externalized in the performance and music of the show", comments Felipe.

For Drummond and Thiago Marinho, play authors, the show brings a message of hope, overcoming and talks about a reunion with what we've lost. "We've lost a lot in the last few months. we stopped seeing friends, family and loves. We've lost that glow that hope brings. mainly children. At the same time, we had the opportunity to rediscover that same glow within us. The play shows the ways for us not to let this light go out, even if they are hard to see", highlight.

The movement direction is by actress and dancer Moira Braga, also visually impaired. "Participating in a new project and with this quality of affection and talent, with an artistic setting that focuses on accessibility and inclusion, It's a gift. I feel very honored to be able to act where my work is recognized", celebrates, Moira.

The purpose of the show is to give prominence to visual impairment, expanding the reflection on accessibility within the performing arts, mainly aimed at the universe of childhood, both within the show and in the composition of the technical and artistic team.

Doris Rollemberg's scenography transforms the CCBB stage into the intimate and symbolic universe of the protagonist. The space, small and confined, is surrounded by veils, membranes that hinder vision, but who fall when your world expands through your imagination.

karen acioly, artistic director of the show, is dedicated to the authorship of multidisciplinary projects and programs for children for 35 years. book author, award-winning audiovisual scripts and director of theatrical texts, is international curator of exhibitions, festivals and creator of FIL – International Language Exchange Festival, what happens for 18 years.

“Missing is a very silent feeling in a child's heart and we need to talk about it. We invented a show that looks at what this child feels and listens to. music guides us, in circular motions, through the imagination of a boy who needs to invent a city, unveil your veils and live a dangerous adventure, to see what you feel", says Karen.