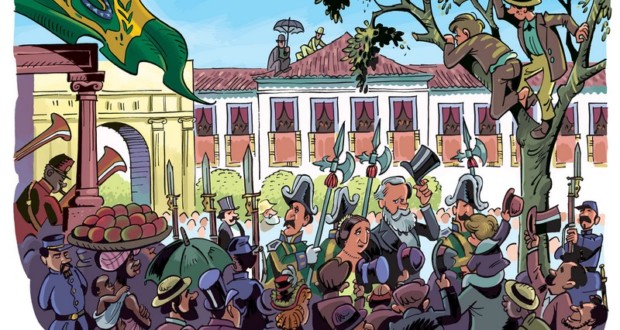 Illustration of the book ' the beards of the Emperor ', by João Spacca.

Ex-cartoonist's foil. Paulo will participate in chat at Sesc Sorocaba

The cartoonist John Spacca has won the trophy HQMIX

The "Ilustradoria", monthly illustrators meeting promoted by Sesc Sorocaba, gets the day 26 November, farm, at 18h, in the living area, the cartoonist, Illustrator and author, João Spacca. Participation in the event is free and the indicative classification is for people from 14 years.

João Spacca was cartoonist in the newspaper Folha de S. Paul and has also worked with advertising and animation. Wrote and illustrated the graphic novels of the series "Santô and aviation's parents". Among the many awards received, the trophy HQMIX ( the "Oscar of comics"), in 2006, in the categories "National Artist", "Special Edition" and "National Writer", and also in the 2008, elected as "Best National Artist".

Born in the year of 1964, in São Paulo, João Spacca has a degree in fine arts with a specialization in Visual communication from Fundação Armando Alvares Penteado (FAAP – São Paulo). Several of his creations, as "John of Brazil" and "Debret", have been adapted for television. Between 1997 and 2010, Spacca has participated in several national and international exhibitions. Learn more about his work and his career by accessing their official website: www.spacca.com.br.

The project "Ilustradoria", SESC Sorocaba, proposes to stimulate the exchange of ideas and contacts between designers and professionals in the field to encourage freedom of creation. Already participated in the chat artists as Sidney Gusman, Editor-in-Chief of UniversoHQ, the main site of comics in the country; Artur Fujita, who has worked on Mauricio de Sousa Produções; among others.

Previous: Sea of Cultures receives the sambista Diogo Nogueira to homage to João Nogueira
Next: Little Aaron, a great artist!