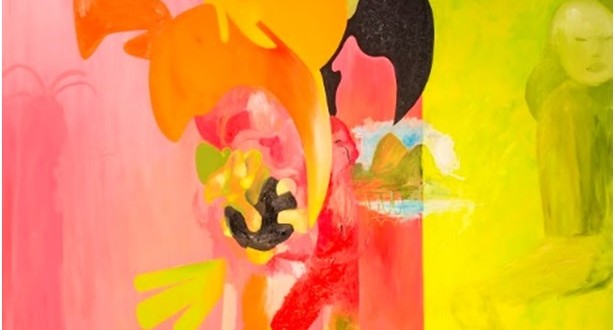 Ground floor of the exhibition hall

The starting point of the show is the beginning of the Lindote experience as a student of cartoonist Renato Canini-main Brazilian Illustrator José Carioca, the Disney Parrot. The bird with the colors of Brazil – created in 1942, When the United States sought to expand the symbolic power of cultural policies and diplomacy with the South America – was very important in the career of Lindote and permeates to this day his work, constantly being revisited and reimagined, like other foreign characters with strong entry in Latin America. Mórficas operations performed by Lindote the kite-and also by other names – conduct a dialogue with the imaginary constituted since the arrival of our European continent, What originated allegories of America, Brazil symbologies and representations of Rio de Janeiro. The work of the artist who names the exhibition points out the deep relationship of Brazilian art with foreign iconography always dealt with his sights on the tropical nature.

The first presents the start of Fernando Lindote trajectory in the arts focusing on the relationship between the artist and Renato Canini. To contextualize, the exhibition also features illustrations of names like J. Carlos, Bobby Neueschwander, Glauco, Claudio Tozzi, as well as copies of the comics José Carioca, magazine Cacique and O Pasquim. The second part focuses on the biodiversity present in representations of nature in the tropics, having the parrot as one of the national symbols. The core shows the relationships among the natives and the settlers imaginaries in relation to biodiversity with works of Lindote, Frances Manuela Valadão, Albert Eckhout, Sérgio Allevato, Walmor Corrêa, Milton Guran, Ana Miguel and porcelains Art Deco.

The third module is composed of a large number of works produced by Lindote in the years 1990 and 2015, mainly, and that address encoded as operation procedure, plastic artist, Trainer of a universe composed of shower proof only and viscosities. Complete this part three excerpts from the film Best regards, people (Disney, 1948). The imaginary construction of cultural diversity through depictions of Rio de Janeiro conceptualizes the last core. The works here – in addition to knickknacks, postcards, tissues, pictures and characters icons River and Brazil – discuss how the city was used in the age of mass cultures, consolidating it as an area recognized internationally for its ability to set up plastic and graphic symbols.

Fernando Lindote: cheating and the Parrot parade Macunaíma will occupy the ground floor of the exhibition hall of the sea between 1st December 2015 to 24 April 2016. To mark the opening, to 11:00 happens to Gallery Talk with Fernando Lindote, Paulo Herkenhoff, Clarissa Diniz and Leno Veras.

The museum has the Globe Group as maintainer, sponsored by BG as Brazil maintains, In addition to Souza Cruz and Itaú as Co-sponsors, Dow as supporter of look and Brookfield as supporter of Educational Visits. It also sponsored the Braskem by means of the law of incentive to the culture of the State of Rio de Janeiro, with the support of the Government of the State of Rio de Janeiro, and the Ministry of culture and the Federal Government of Brazil through the Federal law of incentive to culture. The management is left to the Odeon Institute.