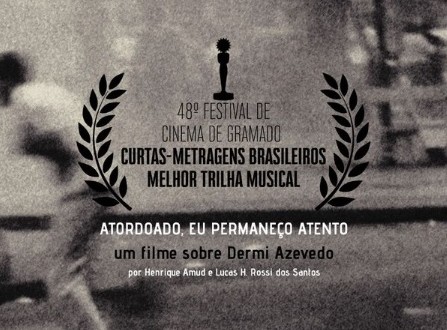 Rio de Janeiro – October 2020 – Lucas H. Rossi dos Santos and Henrique Amud – students of the Cinema course at Estácio, directors and producers of the film “Stunned, I remain attentive” – just won the Kikito Trophy in the Best Musical Track category at the 48th Gramado Film Festival, in Rio Grande do Sul. The project was produced by Baraúna and distributed by Arapuá Filme, company founded by the two in 2017. Because of the pandemic, the festival and the award ceremony were held through Canal Brasil and through the internet. The documentary brings the reflections of journalist Dermi Azevedo, who now lives with Parkinson's syndrome, but who never stopped fighting for human rights and now, more than three decades after the end of the dictatorship, watches the return of the practices of that time. The short was released in 2020 and lasts for 15 minutes. Your trailer can be viewed through the link: vimeo.com/356966411 .

About the Soundtrack: The soundtrack, who was awarded a Kikito trophy at 48Gramado Film Festival and features instrumental tracks composed by Amazonian musician Hakaima Sadamitsu and multi-instrumentalist Paulsita M. Takara, who kindly gave up their music for the production of the film. “It was a great happiness for us, not only because it is an immense honor to participate and be awarded in one of the most important festivals in Latin American cinema, but also because the construction of the sound of the film, from the ambiences to the songs, it took a lot of planning and a lot of trying before we got to what we wanted. So we also thank Alexandre Jardim, who did the sound mix for the film at CTAV ”, Lucas and Henrique comment.

Journalist and political scientist born in Jardim do Seridó / RN in 1949, Dermi Azevedo was created in Currais Novos, city ​​he adopted as his. Report author in Europe, Latin America and Africa. Reporter and editor of magazines and newspapers: The Caicó Leaf, Student Tribune, Northern Tribune, Christmas Diary, The Order, Minimum wage, Eyesight, Borges Culture Magazine, from Petrópolis / RJ, The Bandeirante, of Lins, Sao Paulo Last Minute, Illustrated Sunday, Headline, Facts and Photo, Jornal da Tarde, See, This Is, Diary of the Great ABC, Here São Paulo, Upside-down. It was corresponding, in Brazil, from the French Magazine Informations Catholiques Internacionales de Paris and from the magazine Isto É in Rome. He was director of the Union of Professional Journalists of the State of São Paulo for two terms. It is one of the founders, in 1982, of the National Human Rights Movement, of which he was National Secretary of Communication and Public Policies. Former professor and Coordinator of the Social Communication Course at the Methodist University of Piracicaba (UNIMEP / SP).

Currently serves as Human Rights Coordinator at the Maximiliano Kolbe Center, an NGO dedicated to the formation of citizenship in Human Rights. Among his published books are “Tortured Crossings: Human Rights and Dictatorship in Brazil, 1964-1985” and “No Right to Less – Human rights: Theory and practice".

Founded in 2017, by Lucas H. Rossi dos Santos and Henrique Amud, Arapuá Filmes is a Brazilian producer and distributor that has promoted the participation and circulation of Brazilian films in festivals and film shows around the world.

In addition, Arapuá Filmes also works with consultancy and development of cinematographic projects and curatorship and production of cinema shows. In 2017 Arapuá was one of the producers and creators of the Mostra Curto Retiro, not done Retiro two Artists, in Rio de Janeiro. More information can be obtained through the link: www.arapuafilmes.com.br/sobre-a-arapuÁ

Lucas H. Rossi dos Santos is a black director based in Rio de Janeiro. He produced feature films like “Como Você Vê Me?”, "Kabadio – Time is in no hurry, walk barefoot ”, “Dirty Canastra” and “Death Dwells at Night”, that had its premiere world no Rotterdam Festival of 2020, in addition to short films awarded as “Ao Final da Conversa, They say goodbye with a hug ”, “Repulsa” and “Auto Falo”. "O Myriam's Dress” it was his first fiction short film as a director, in 2017, for which he won the award for Best Director in the Short Cinema 2017 and Best Short Film at Cine Ceará festivals, 41° Elche International Independent Film Festival, in addition to the Canal Brasil acquisition award. In 2020 launched directed the documentary short “Stunned, I remain attentive”, participating in the Toulouse festivals, Huesca, Vienna Shorts, Shorts Mexico, The short film festival and Docudays UA, among others, beyond the rehearsal film “Be Happy in the Go”, produced entirely during quarantine. Currently studying Cinema at Estácio de Sá University – Tom Jobim Campus, in Barra da Tijuca.

Henrique Amud is an Amazonian writer and researcher based in Rio de Janeiro. For Bond’s Filmes, he acted in the documentary series “The Varandistas” (Channel Brazil, 2016) and in the documentary feature film about the profession of actors in Brazil, “How you see me” (Channel Brazil, 2017), that opened in theaters in 2018. “Stunned, I remain attentive” (2020), short documentary about the journalist and human rights activist Dermi Azevedo, it's his debut in the direction. Currently studying Cinema at Estácio de Sá University – Tom Jobim Campus, in Barra da Tijuca.

Previous: Art in Dialogue Project, in Quarantine, with Cláudio Valério
Next: 3 novel authors to read later this year