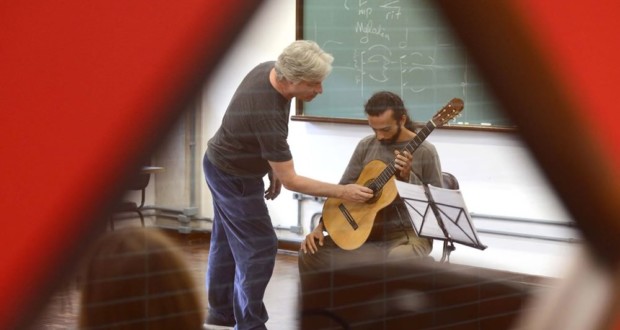 Entries for the 35th music workshop in Curitiba were extended for the day 16 of december. The Workshop, which happens to 27 from January to 8 February 2018, still has 47 courses with vacancies opened in the areas of classical music, old, popular music and music courses in the Regional city. Entries must be made for the link: www.oficinademusica.org.br/cursos/.

Among the 47 courses still with vacancies, 5 are in the area of ancient music, 14 in classical, 26 in the category of popular music and 2 of music and technology. The opportunity is unique mainly for candidates who need to undergo selection, says Janet Andrade, classical music coordinator of the Cultural Foundation of Curitiba. "The remaining vacancies will be opened again for the less popular courses, the most requested the inscription is to be made at this time ", recalls Janet.

The music workshop will have as main headquarters the Pontifical Catholic University of Paraná (PUCPR), In addition to the regional administrations, with the courses of music children's Music project. The registration fee varies according to the number of courses and: R$ 130 (a course), R$ 195 (two courses) e R$ 234 (three courses). The Music will be free courses.

In classical music, under the direction of maestro Abel Ramirez, There are still vacancies for ' practice of ropes in collective study ' and ' initiation into heterogeneous learning ' string with the Regent Amogh Oliveira. Classes of instruments like oboe, saxophone and trombone are also available.

Those interested can still subscribe to the stages of the "Opera Studio", unprecedented course in workshop intends to perform the concert "the magic flute" by Wolfgang Amadeus Mozart. Internship positions are for Opera production with the Director of the workshop, Abel Ramirez and accessories with recyclable materials and stage makeup, with Maria Adélia Ferreira.

"Ensure the conviviality with professionals of excellence and teaching a new demand that the musicians have been my focus, music education, the formation of audience and entrepreneurship will be some of the contents worked ", said Rock.

Early music module, under the direction of his career living in England Rodolfo Richter, musicians of the international scene as the American cellist, Jennifer Morsches, The harpsichordist James Johnstone of England, the flutist living in France, Rodrigo Calveyra are among the teachers who haven't closed their folders.

With the direction of João Egashira, in the category of Brazilian Popular Music, between the open courses are: ' Peak ' and ' Brazilian Brazilian rhythms applied to the battery of the samba school ' with Gabriel Policarpo, Brazilian bass lines with Glauco Solter and the guitar in the Frevo with Luciano Magno.

"This year the workshop comes with a different energy, a curatorial side of Abel, across the city will be breathing more popular music. The music is one and we are focused to show it in a more evident to the public. With performances and actions that show this interrelation ", said John Egashira.

Partners- Promoted by the City Hall and the Cultural Foundation of Curitiba, Curitiba Institute for art and culture (ICAC), the music workshop 2018 has the sponsorship of Caixa Econômica Federal, support master from PUC-Pontifical Catholic University of Paraná and cultural support of the Centro Cultural Teatro Guaíra, Consulate General of Poland in Curitiba, Family Flour, And-Paraná, School of music and fine arts of Paraná-UNESPAR UNIVERSITIES, Faculty of Arts of Paraná, Secretary of State for Culture, SESC da Esquina and Paço da Liberdade, UFPR/Dean of extension and culture, Sanepar, Itaipu Binacional and Petrobras.

Previous: People with visual disabilities participate in dance show
Next: The essence of Athos Bulcão in Shows celebrating the century of birth of artist