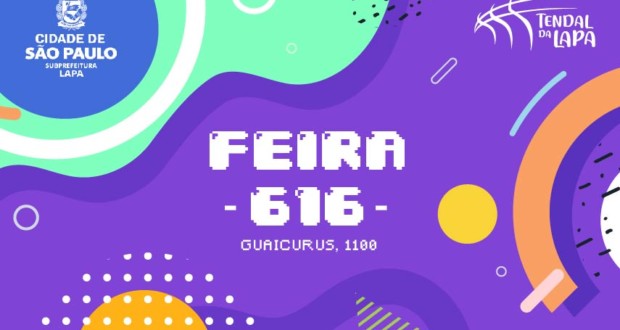 Tendal da Lapa receive the first edition of the Fair 616

On 02 November the Tendal da Lapa receives the Fair 616. In this first edition, the organization plunged into the geek universe, nerd, otaku, otome, sci-fi and pop culture. Check out all the multiverse, that have accessible spaces, diverse and open to all.

In this area dedicated to fandons, the public can turn with face paintings, makeup and props. There will be a space for photos with backsdrops, exhibitors of products Costplay, necklaces, props, mugs and a special comfort zone, to rest their missions and battles and carry their phones. Even celebrar esse multiverse, the fair 616 will promote a Costplay dance with music from anime, Games, filmes Sci-fi, merged with interventions DJ Linksenza. The three best looks, accompanied by a good performance, receive special awards.

In this space everyone will be connected with a wide Wi-Fi coverage areas and for online games. The exclusive area of ​​Epic Games to official games Pokémon TCG, Magic The Gathering, Yu gi-oh and Board games. Also scheduled this conversation circles space with youtuber Montalban and the voice actress Vii Zedek.

In the land, everyone can connect with the time and green space, taking advantage of a play area specially fitted with umbrellas, tables, chairs, inflatable, pogo stick and banks. There are also presents an area for drawings, where you can unleash your imagination.

The office of Manga is on account of the organizers!

The Fan clubs will have exclusive spaces, for anyone to join, exchange and learn more.

This is the connecting space between the multiverse, here and there displays a feeding area with traditional oriental foods, Brazil, candies, açaí, savory and craft beer.

Previous: Zaza Garden - "The Art of Fibril", by Edmundo Cavalcanti
Next: Last days to give shows Pirajá, Renato Morcatti, at Caixa Cultural SP