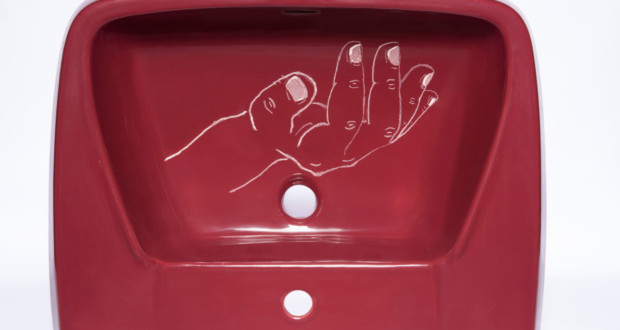 The Emmathomas Gallery will receive from 14 February the exhibition “ALEX FLEMMING”, with its newest series of works conceptually created in Berlin in 2018. As 28 presented pieces were worked by the artist in residence program in Marcos Amaro Foundation in Itu. The Artist, calling its new series of 'Ecce Homo', used bathroom sinks decades of 70 and 80 in which carved, with diamond tip, drawings of hands.

The sinks are shown unconventionally: They are put standing as an object that refers to the form of domestic altars of the Brazilian Baroque. Altogether there are 28 different formats and colors sinks, that will make a metaphor about how people behave in the current political scenario, washing hands for the great responsibilities facing the country.

Alex Flemming used the biblical passage about the crucifixion of Jesus Christ as the basis of his criticism. Ecce Homo are the words that Pontius Pilate would have said when presenting Jesus before the crowd and order them to choose the son of the destination of God. After the people opt for the crucifixion of Jesus Christ, Pontius Pilate washed his hands before all, and said: "I am innocent of the blood of this just. Consider this ". That was born the saying 'I wash my hands'.

Appropriating an object used by literally all Brazilians, Alex Flemming brings us to the question of responsibility that affects us all, regardless of gender, social class or religion. Flemming using the history of art to remember Marcel Duchamp with his ready-made, but take a step in another direction by appropriating the sink and modify it with a sculpted design.

According to its trajectory, when ever he proved a passionate colorist, the artist uses sinks manufactured in Brazil in the decades of 70 and 80 when baby pink color were produced calls, blue panties, emerald green or purple-beet. Flemming shows Brazil either directly through its recent past, conceptually as to cause the metaphor that the adage (Wash hands), promoting a sociological discussion through these objects.

The artist Alex Flemming says: “…my work has always had a political character. Already denounced torture during the military dictatorship in the years 70, the death of nature and ecological conflicts in the years 90, when I spoke also about conflicts around the world with the Body-Buiders series. In 2002 I created the Flying Carpets series on bombings 11 September and 2016 Anaconda series, a plastic reflection on the horrors of the Islamic State of dictatorship hiding on the beautiful cultural tradition of the East. The Ecce Homo series proposes a plastic reflection of the fact wash our hands on important national issues, leaving them to be decided by politicians and other powerful, thus reversing the biblical relationship ". The artist also makes it clear that the question, in their view, every work of art must be beautiful, seductress, intriguing, sweeping.

The show, curated by Ricardo Resende and catalog about 50 pages, happen in Emma Thomas Gallery on 14 February and will be on display until 22 March 2019.

Previous: Introduction to the History and Language of Cinema
Next: ROBERTO RANGEL - Sculpture Exhibition

"Never knew in detail what you think tudo, but always thinks everything he says." Aristotle