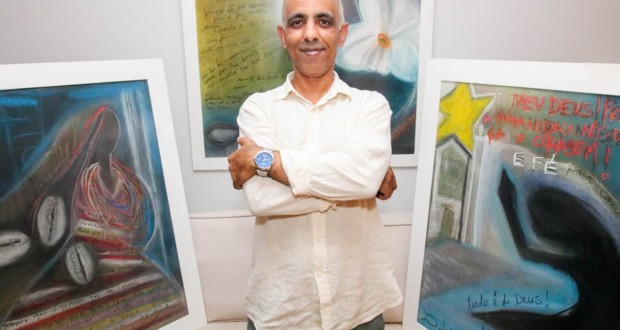 For the first time in Rio, the show invites an independent artist to exhibit their work at Espaço Atelier

Casa Design is an exhibition of architecture, design, landscaping, decoration and fine arts, which brings together projects by renowned professionals. Since 2003, the event takes place in Niterói, also working in the Lagos Region, Petrópolis and Juiz de Fora. For the first time, Casa Design arrives in Rio de Janeiro, Botafogo, until day 17 July. In addition, it is also the first time that it receives a plastic artist, Alex Magno, in an independent space, called “Espaço Atelier” created by the curator of Casa Design, the architect Marcelo Reis, in which are exposed 7 Alex paintings, in addition to a TV that shows the documentary explaining about the project and the artist.

“I exhibit in this space the works of art executed by me, in Pastel Seco on various paper surfaces, such as: Leather Paper, Panama, among others. At Casa Design, people will be able to see the works that are part of the “Roda de Telas ao Som do Samba” Project. Receiving this invitation was an honor.. The project “Uma Roda de Tela ao Som do Samba” was started from a desire I had to organize my musical works with my composition partners. I called Maestro Paulo Salvador (Ratinho da Cavaco), great partner of Almir Guineto, to make the arrangements. Thus, we started recording before the pandemic and were interrupted by it. But we're back in full force. The idea was to bring together for this recording several generations of samba. We call Ademir (Fundo de Quintal), Malacacheta Group, Exporta Samba musicians, Banai (Pique Novo percussionist), the great friend Milton Manhães (Music Producer of the album “Raça Brasileira”), Andinho (percussionist of new generation artists), Carlão 7 strings (portela), claudia cross, among several other musicians who got involved with my work”, Alex Magno account, doctor and plastic artist exhibitor at Casa Design.

In its path, Alex Magno is a composer, musician, plastic artist and general surgeon. He grew up in Bento Ribeiro experiencing samba through composers from the samba schools Portela and Império Serrano, your father's friends. Merging the universe of music with the poetry of painting has always been the goal of the doctor-artist., whose works are exhibited at the Casa Design show through the project Uma Roda de Telas ao Som de Samba.

“I brought to Casa Design an exclusive space for a visual experience, auditory and sensory. I completely left my comfort zone to present my work to as many visitors as possible and also to show that art needs to be accessible to everyone.”, alex explains.

A Roda of Screens to the Sound of Samba

By uniting your composing and drawing skills, resulting in the project “Uma Roda de Telas ao Som do Samba”, by Radar Records Brazil, Alex released a track with his screen a month, having so far 7 songs and screens released.

about the screens, the artist is one of the few Brazilians to work exclusively with pastels, one of the most complex painting techniques, because it is not possible to erase in case of errors.

The release order was as follows:

VERSATILITY
Composition: Alex Magno e Gallo Br
A root and versatile samba with the flavor of the great works born in the suburbs of Rio de Janeiro. Versatility delivers a connection between old school compositions and the new generation of samba.

AÇAÍ COLOR
Composition: Alex Magno, Bruno Castro and Ciraninho
A mix of Rio de Janeiro and Belém do Pará through love and samba. Cor de Açaí rescues the memories and experiences of the culture of Belém do Pará, highlighting the Círio de Nazaré and the Carimbó joined to the samba carioca.

OH! MY BEAUTIFUL FLOWER
Composition: Alex Magno and Ratinho do Cavaco
“Oh! Minha Linda Flor” looks for details of a father's look of admiration.
Getting to the Artist, the song honors Maria Flor, Alex the Great's Daughter. With techniques and melodic curves, she connects her father's love to her daughter's childhood.

DREAMING ABOUT YOUR SMILE
Composition: Alex Magno and Ciraninho
The smile like a light that directs. “Sonhando com Seu Sorriso” tells about a love story from the past that left a lot of nostalgia that became fuel in the search to relive that love..

I WENT TO BAHIA
Composition: Alex Magno, Ratinho do Cavaco and Gallo Br
A game of shells and a clairvoyance. “Eu Fui à Bahia” tells a different approach of a priest of the Afro-Brazilian religion, it tells the next steps of a relationship between a man and a woman who had other interests besides the relationship.

EVERYTHING IS FROM GOD
Composition: Alex Magno and Ratinho do Cavaco
everything is from God, nothing is mine. A samba that portrays divine constructions and a request for healing for humanity in the form of a prayer.

Childhood and vocation for the arts

Alex spent the first years of his life in the neighborhood of Bento Ribeiro, suburb of Rio de Janeiro, always surrounded by books and focused on his studies to be approved in medical school by his father's encouragement, Professor Charlemagne Lamb, who realized his talent for the arts early on.

With only 12 years, build your relationship with music, majoring in classical and popular guitar. Your father always had several friends from the samba universe, who were part of the wing of composers of the Império Serrano and Portela samba schools.

With such a close relationship with music, soon finds himself enchanted by the composition of sambas-enredo.

Despite being very close to samba, the singer never saw boundaries to compose and appreciate musicality, having in his works influences of rhythms such as rock, jazz, Blues, among many others.

Lifelong, the composer made several friendships that resulted in very successful partnerships. A great example is the composer Ciraninho da Portela, who composed with him “Mar do Amor”, engraved in 2009 by the singer (and also personal friend) Diogo Nogueira on his first CD, “I'm doing my part”, released by record label EMI.

Another partnership worth mentioning is the one with the artist Bruno Castro. Together they composed “Segredo do Amor” and “Close with Me”, composed by the duo and also by Gallo Br, being recorded by Dudu Nobre.

A remarkable moment in the singer's artistic and personal life was the celebration of 91 years of the first lady of samba, Dona Ivone Lara, where he participates in a performance at Teatro Rival in 2012, joining on stage personalities like Nelson Sargento, Andre Lara, Leandro Fregonési, Raphael dos Santos, in addition to your friends already mentioned, Bruno Castro and Ciraninho da Portela.

Trajectory in the plastic arts

He was also part of the Colmeia de Pintores do Brasil., in the Quinta da Boa Vista, where he potentiated his creative process in the visual arts, through interaction with multiple artists. Finally, was a student of noted plastic artist Dora Carter, who was a student of Anitta Malfatti.

In his last years of life, was one of the great influences for Alex Magno, who used his studio in São Conrado to create and dialogue about the arts with this great personality.

With such unique baggage, the challenge of uniting the two great passions of the artist, that with the encouragement of great samba names, had the idea of ​​painting pictures that had his musical compositions as a backdrop.

After several moments of perspiration and inspiration, the exhibition “A Roda de Telas ao Som de Samba” was born, which brings together seven paintings and compositions by the artist, providing visitors with a multisensory experience. sharpen the look, the ears, capriche in samba no pé and discover this new way of appreciating art.

Medicine and the world of fine arts

“Medicine is an art.. I am a General Surgeon and Vide Laparoscopic, I've been living art since I was very young. My parents always explored and invested in the gifts they saw in me. I studied classical music with guitarist Carlos Siqueira (Old National Orchestra), I was a student of the contemporary Plastic Artist Chisnandes, I studied free painting at Colmeia de Pintores do Brasil, where the creative experience and the exchange of ideas with different artists was a watershed in my life in the visual arts. And I was gifted to live and learn with the plastic artist Dora Karter, who was a student of Anitta Malfatti and taught me how to work with unusual materials and see art with another meaning”, Tell Alex.

For the doctor-artist, “medicine is the science and art of “healing the sick and alleviating suffering”. With the objective of clarifying more and more that art and medicine walk together, Alex goes back to the past:

“Leonardo da Vinci dissected bodies to make his works perfect, showing us that medicine is art. The act of inspecting and contemplating the patient from the moment he walks through the door of my office is a gift that always needs to be improved.. The person who arrives at the office brings several signs, that often open the door to early diagnosis. The first movement of semiology called “Inspection”, is where we can observe if the gait of that human being has alterations, for example, leading us to think about neurological diseases, changes in skin color and so on. In addition, the good doctor-patient relationship or better human being with another human being can bring us. this is art!”, Alex ends.