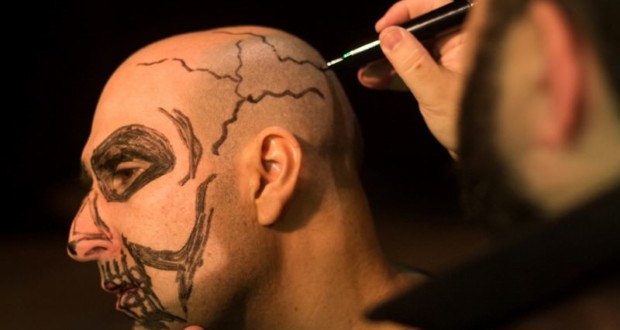 Performer invited six artists to propose unprecedented actions to
be presented together in the center of the Earth. With
curated by Ruy Son, occupation has tickets to pay as much as you can

In the occupation BUILDING SOIL ACCOMPANIED, the performer Alexander D'angeli performs of 30 from June to 9 July at the center of the Earth, six artists from different areas they propose an unprecedented action to be performed in conjunction. Every day, the performer alongside the guests will do a different presentation, where is the willingness of artists to a language Exchange, You can take apart the stage building environments, including the stairs and the café-bar.

Actor Flavio Barollo initiates the occupation on the day 30 of June, passing by the performer Renan Marcondes (1July), the Argentine artist Silvio de Gracia (2 July), the Ballerina Eliana de Santana (7 July) and performers Rodrigo Munhoz (8 July) Estela Lapponi (9 July). Tickets for the six days of presentation are pay as you can, where the public decide how much you want to pay for the presentation.

For Alexandre D ' Angeli the invitation of curator Ruy Son for the occupation in the center of the Earth was a pleasant surprise, because for a long time the artist has been taken along the theater's black box in the search for new ways to occupy. "What I did was extend the invitation to some of the many artists who wish to work, so that could contaminate with their proposals. An image that mobilizes enough for this occupation is the idea of being there 15 metres below the surface of the Earth, What made me bring the word to compose the title of the action. When I thought about BUILDING SOIL ACCOMPANIED I wanted to refer to the ground as ground, ground, space where we step, built and planted. A power open to the terrace meeting ", He explains. 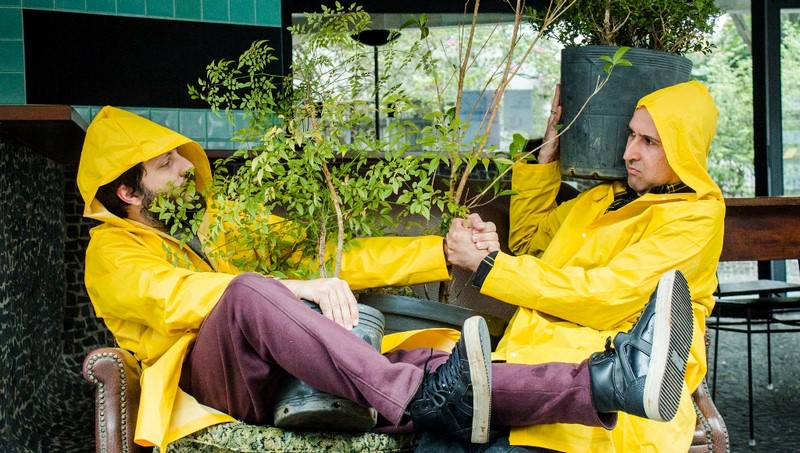 BUILDING SOIL ACCOMPANIED begins on the day 30 of June, Friday, to 21 hours. The action of the actor Flavio Barollo happens in the cafe-bar and will be built alongside Alexander D'angeli and the public. From the concept of soil fertility of life territory, gadgets that deal with the environment will be exposed and will serve as a support to feed the imagination of the public about issues of human dryness. Performing actions will reveal an audiovisual speech, with multiple video projection brackets, in order to build a poetic narrative and imagery to a more humane future.

On the 1st of July, Saturday, to 20 hours, turns out the planned action by Renan Marcondes, that along with Alexander D'angeli take turns reading the integral of First Love, by Samuel Beckett. Each performer has in your left hand a white glove with Extenders, and whenever you're reading caresses with that glove the other performer who is lying on the floor in several positions, but always with his back to the audience. Whenever a page is completed by a performer a Bell is played and the places are swapped. 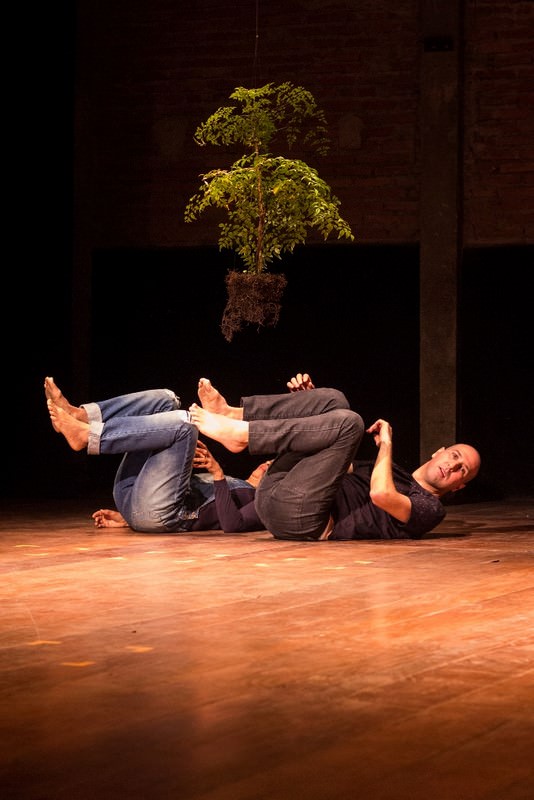 The Argentine artist Silvio de Gracia proposes the virtual action Out form the deep, What happens on the day 2 July, Sunday, from 19 hours. Front of a watercourse, standing and property, This is how the artist will appear in a video with duration of 45 minutes that will be projected on the stage of the theater of the center of the Earth. In this space, Alexander D ' Angeli proposes a series of actions from the material proposed by Silvio, where water, the flux and permanence are recurring elements.

The second weekend of the occupation BUILDING SOIL ACCOMPANIED start day 7 July, Friday, to 21 hours, with the Ballerina Eliana de Santana, It proposes an action around a small tree suspended. The object suggests thinking a space of time in which the body seeks contacts beyond the surface, so that the actions, Although the result of a meeting, are loose roots, pendule through the use of. What is sought in this invitation is the other and the delivery for performing dynamic a place openly unknown.

Rodrigo Munhoz proposes to carry out layers of drawings to the head of the artist Alexandre D'angeli. From the images generated if introduces a photographic journey able to display a series of changes in each separate moment. The action happens day 8 July, Saturday, to 20 hours.

In India trip Estela Lapponi ends the occupation on the day 9 July, Sunday, to 19 hours. The reference in the East to seek multiart propose an unprecedented action, that will be known only on the date of your meeting with D'angeli.

The theater in the center of the Earth opens the doors to receive Theater presentations, dance and performance in what seems most obvious: the experience. Without the search for final products or mere presentations circumstances for fulfilling seasons, the artists will be invited to build scenic experiences, aesthetics, dramaturgic, choreographic works, performance and conceptual.

According to Ruy Son, When resizing the center of the Earth to the receipt of these artists and research, advances to the responsibility to serve the cultural context as well as incubator. For both, the artistic quality is fundamental to meeting and socializing with spectators and the possible developments with other institutions and structures. Defined, yet, front of the experimental value that the achievements would occupy the spaces as normal seasons, but on condition of small events, noises available to all, in which relevant names will be invited to exhibit their ideas and research. "Establish a space of experimentation is critical to the growth of the theatrical scene, in order to establish in the context of the city of São Paulo new parameters and propositions. The center of the Earth accepts such a role and be in your little participatory Revolution movement. We are hoping, What is especially positive, for that not to be so small ", believes the curator.

Performer, actor and puppeteer with a degree in performing arts. Specialized in Dramatic corporeal MIME and Theatrical Stunt by Ecole International de Mime Corporel Dramatique Gestuel of Paris, under the guidance of master Ivan Bacciocchi. Interested especially for the languages more directly related to the body, and that operate at the intersection of performance and the theatre. He was founder and artistic director of the soul 2. Participated in the occupation project It's Right There the Sesc Ipiranga with Listening to the Sheep Sleeping, performance with texts of the author and cartoonist Caco Gallardo, He also participated in the Festival Sesc Rio de Janeiro's winter and Virada Cultural in Belo Horizonte at Sesc Palladium. Integrated display Communal Land – Marina Abramovic + MAI as a facilitator of the Abramovic method. In the same year 436, long-term performance and installation, proposing to visitors of the Memorial of the resistance of São Paulo Assembly of 436 paper faces in memory to the dead and missing politicians. In 2010 was responsible for the artistic interventions carried out in the Tietê Bus Terminal during the Virada Cultural, emphasis on Valuables and Présence Decroux. Participated with the performance Valuables parallel opening 29th São Paulo biennial promoted by Sesc Campinas. Creator and performer in Molloy – The end is the beginning and yet continue, Show sign Theatre solo inspired by the novel by Samuel Beckett, who attended the shows Samuel Beckett – 100 years organized by SESC Santana and joined the VII Shows Cariri of arts through the Revolving Stage of SESC Ceará. In 2016 He joined the V biennial of Performance of Bogotá, the Festival La Plaformance-networked Resistance, the second edition of the Mezzanine Gallery MOVES with the performance The Reader, and conducted the performance An ergonomic study of the Ephemeral, in Permeable Presence project, the square of the arts, in São Paulo. He also participated in the SP-art and MP3 – Mostra Internacional de Performance de Belo Horizonte with the performance Waste, work in 2015 was held at the bad habits of Artistic Intervention Space, in the city of Porto, in Portugal, and also in the project Performance in Meeting the Sesc Campinas. The performance The Reader integrated, in 2017, display programming Contamination, the Sesc Ipiranga and will be presented at Sesc Paraty during FLIP-Paraty international literary festival. The artist is also one of the guests of the show Verb, What happens in July on Red Gallery. www.alexandredangeli.com.

Artist creator of Mobile water park, performing “waterfalls” on the asphalt with spring water and demotion of groundwater in São Paulo; Permanent urban interventions, such as Concrete Lake (with fish in water of groundwater) and The Black Water River (vent opening in the transom Roque Adóglio), Bathroom (doesn't it) Public (toilet installed in the riverbed buried); video and performance Regan pool in the desert, in the Cantareira dam, 25 March, Largo da Batata (Perfor6 Festival), Vale do Anhangabaú (On the street), passing even by international festivals like PerFoArtNet 2016 (Bogota); Stoff – Stockholm Fringe Festival 2016 (Stockholm, Sweden); East Side Gallery 2016 (Berlin, Germany); performance Swim in the river Tietê (2015), performing two dives in the fifth most polluted river in the world, the Tietê River, in São Paulo.

Artist, performer and researcher represented by Adelina Gallery (SP). Doctorate by ECA/USP, Member of the editorial board of performatus magazine and a founding member of the Evil Iguana, production in pole dance and performance. Its main exhibitions include Human proximity protectors – units waltz and Kiss (Paço das Artes – MIS), Against body (individual in Cultural Workshop Oswald de Andrade); shows VERB of performance art; [per-form] (SESC Bom Retiro); MOVES #1 and #2 (Mezzanine Gallery), among other. Award-winning artist in the performance of the sp-arte 2015, Youth Art Hall of SESC Ribeirão Preto and at the Salon of contemporary art Luiz Sacilotto (Santo André). www.renanmarcondes.com.

Visual artist, performer and independent curator based in Junín, in Argentina. The artist has presented his works in performance, public art and meetings in Canada, Italy, Serbia, United Kingdom, Greece, Portugal, Spain, Japan and several countries in Latin America. Silvio also runs the Videoplay project, an international platform dedicated to the dissemination of works in video performance. www.silviodegracia.com.ar.

Acts as a dancer and actress 1984. In the theatre he worked with directors Antunes Filho, Antônio Abujamra and Gerald Tan. In 2009 It was winner of the Clio Awards for dance performer-creator by mounting the show The Other sweet things of God, chronic inspired by Clarice Lispector. In dance, highlighting the shows Brazilian Tragedy, of Manuel Bandeira; Daily ritual, directed by Philippe Jamet in Brazil show in France 2005, with presentations in Brazil and in several theatres in France; The man continues or how can a man think that owns an ox?, the Key Zetta and Cla; Where the beginnings?, inspired by the work Natural theology, Hilda Hilst and Lost in Spaceshit. His most recent works were Whale, inspired by the works Vidas Secas, by Graciliano Ramos, contemplated by the Municipal program of promotion of Dance from the city of São Paulo; The Bricked New Street, inspired by the romance of Castro Vilela and Blue, inspired by the works of British artist Chris Ofili plastic. www.eaoquadradocia.com.br.

This is an artist who moves through the art of performance, photography, video and education. His works have been circulating for many Brazilian States, In addition to Colombia, Ecuador, Venezuela, Mexico, Portugal, Bangladesh and Serbia. In recent years has been dedicated to collaborate on network, for the development of activities operating under the perspective of (from)training, preservation and diffusion of the art of performance. www.rodrigoamorexperimental.blogspot.com.

Performer in Sao Paulo that focuses on scenic speech search disabled body, the relationship with the public and transit between the scenic and Visual languages. Performs artistic practices about Body Intruder, concept created 2009, through a scenic investigation, Visual and conceptual. www.estelapponi.blogspot.com.br.

Previous: “Environment in full” by Rosângela Vig
Next: Exhibition-Toulouse-Lautrec in red by Rosangela Vig