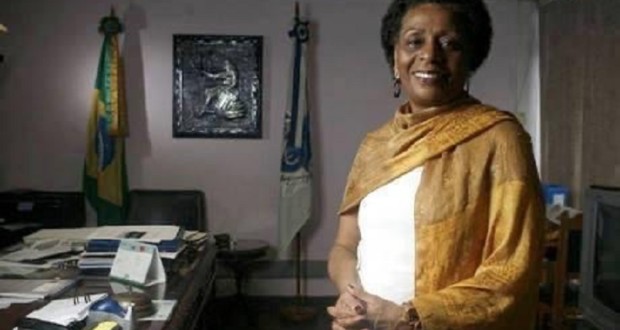 Next Saturday, 25 July, at 19h, to Estácio and Dra. Ivone Caetano will hold a live – through the Teams tool – to celebrate International Latin American and Caribbean Black Women's Day. Dr.. Ivone will be the big honoree of the night, because it is a great reference for being a woman, first black judge in the State of Rio de Janeiro and also because he graduated from the first Law class at Estácio. The event will be free and anyone can participate and ask their questions, just access the link (click here). During the chat, the book “Rosa Negra” will be launched, Patchwork of a Trajectory of Overcoming ”, authored by Ivone.

The work Rosa Negra provides the reader with different perspectives on the life of the biographer in 25 stories, built from birth until today. The book receives the support of Estácio through the Municipal Law of Incentive to Culture in Rio de Janeiro (ISS/RJ), of the City Hall of Rio, and is a realization of ID Cultural. "Take care of the mother because the child is dead", said the doctor to the nurse. Thus began the story of the first black Judge and Judge at the Court of Justice of the State of Rio de Janeiro. But this is also the story of Dona Josepha's daughter, the child who cheated death at birth and who built a path of overcoming as a lawyer, Commissioner of Justice, Judge of Law, Judge, correging, among other professional duties, but, especially, as a human.

Active in projects that contribute to the country's social and cultural development, Estácio promotes the Educar para Transformar Corporate Social Responsibility Program. The program, that supports initiatives in five pillars – Sport, School, Citizenship, Culture, Innovation and Entrepreneurship - reflects Estácio's commitment to providing accessible, quality education and, and, generate a positive impact for the construction of a more just society.

- A Dra. Ivone Caetano is a great example that education really transforms and her life path fills all women in this country with pride. She is a long-standing partnership, because he was part of the third class of Estácio's Law course. I hope the book Rosa Negra can make other people also expire and believe in their professional dreams - says Claudia Romano, vice president of Government Relations, Estácio's Sustainability and Communication.

Brief profile of Dr.. Ivone Caetano, author of the book “Rosa Negra, Patchwork of a Trajectory of Overcoming ”

Ivone Ferreira Caetano is the inspiration of Rosa Negra, medal created by the Brazilian Bar Association. Advocated for 18 years before joining the magistracy. She was the first Judge of Law and Black Judge of the Court of Justice of the State of Rio de Janeiro, besides general corregedora of the unified police of RJ, inspires, with its trajectory of overcoming, those who follow the legal career. Married to Mauricio Caetano for 50 years, is the mother of Márcio Eduardo and Daniela. She is currently the Chief Executive Officer of the Racial Equality Board of the Brazilian Bar Association - Rio de Janeiro Section, and consortium of the Brazilian Lawyers Institute. Ivone continues its path of overcoming by continuing the various projects and activities that continue to make her agenda permanently full.

How the Day was created International Black and Latin American and Caribbean Woman?

In 1992 1st Meeting of Black Latin and Caribbean Women was organized in Santo Domingo, in the Dominican Republic, where several problems and alternatives of how to solve them were discussed. After the meeting, the Network of Afro-Latin American and Afro-Caribbean Women was born, that together with the United Nations (UN), fought for recognition of the day 25 July as International Black Woman's Day, Latin American and Caribbean.

This day is not just a celebration date, but the moment when black women, indigenous and traditional communities reflect and strengthen organizations focused on the various struggles. Here in Brazil, in 2 June 2014, was instituted by Law nº 12.987, the day 25 of July as the National Day of Tereza de Benguela and the Black Woman, tribute to one of the leading women, symbol of resistance and very important leadership in the fight against slavery.

Previous: Period novel set in Brazil raises women's empowerment in the 19th century
Next: Antique Furniture: know the advantages and disadvantages of choosing them