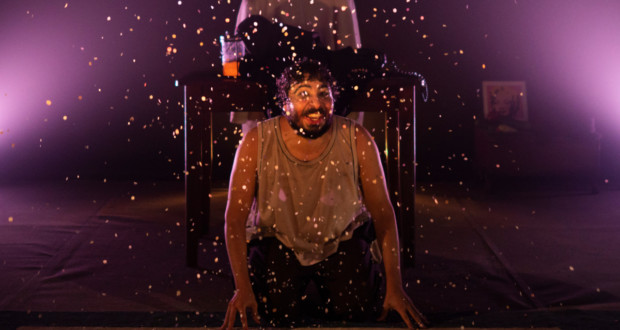 'Ex-fat', new show of Fernando Aveiro, reestreia in February at the Cultural Workshop Oswald Andrade and has presented at SESC São Caetano

With dreamlike and surreal atmosphere, piece of Caxote Research Center addresses gordofobia and the search for identity from intimate mount that puts the viewer in the scene

Themake a post bariatric surgery, a man who lives isolated in his microapartamento on the 48th floor facing figures of the past, in order to discover its true essence. This is the starting point "Ex-fat", new Caxote Research Center, with text and direction Fernando and Aveiro co-directed the Naiene Sanchez, who, after the estrar Sesc Ipiranga, gains a new season in Oficina Cultural Oswald de Andrade, from 3 to 18 February. O espetáculo tem apresentações às segundas e terças, always at 20h, with free entry. The SESC São Caetano, the piece is presented on 14 February, at 8:0 pm, with tickets to R $ 30 reais.

No list, are Barbara Salome, Camila Biondan, Humberto Caligari and Murilo Inforsato, besides himself Fernando Aveiro, who plays the protagonist.

"This Ex-fat invites a group of artists to go to his house and interpret the characters that inhabit your memory, so he can, who knows, feel part of a society and settle out of his chaotic private world ", account Aveiro, working from the text 2011. "The piece came when, still in CPT, I had an idea for a scene of ready-to-wear, which ended up not running. It was a written tied to the figure of a religious fat and its discontents, and was called One Sunday after Mass. I revisited the text frequently to extract the original idea all of creation and characters possibilities, but only managed to close it in 2019, now under the name of Former Gordo ", complete.

In the middle of a dream atmosphere and surreal, the public is invited to spend 80 minutes in the house this agent and keep a kind of theatrical psychodrama session. All sit in different chairs of styles and formats positioned within the scene, in a semiarena. While watching the unfolding of history, viewers can even take a coffee. At the end of the show, the idea is that each person can look to work with a range of co-creation.

Aveiro explores some autobiographical elements in the narrative. "I had a religious background, I was fat and I suffered a lot from it; precisely because they have been deprived by… 'All of them that confined us to the shore, that ousted our personality '… and it is no exaggeration. Verbs such as confining and dismiss must appear to give the tragic dimension of the whole thing. Today, I know I'm not just talking about my private view, or from the viewpoint of the group of renegade. I'm talking about all of us, for who was not on gang marginalized, or was in attack position or as an observer ", says playwright. 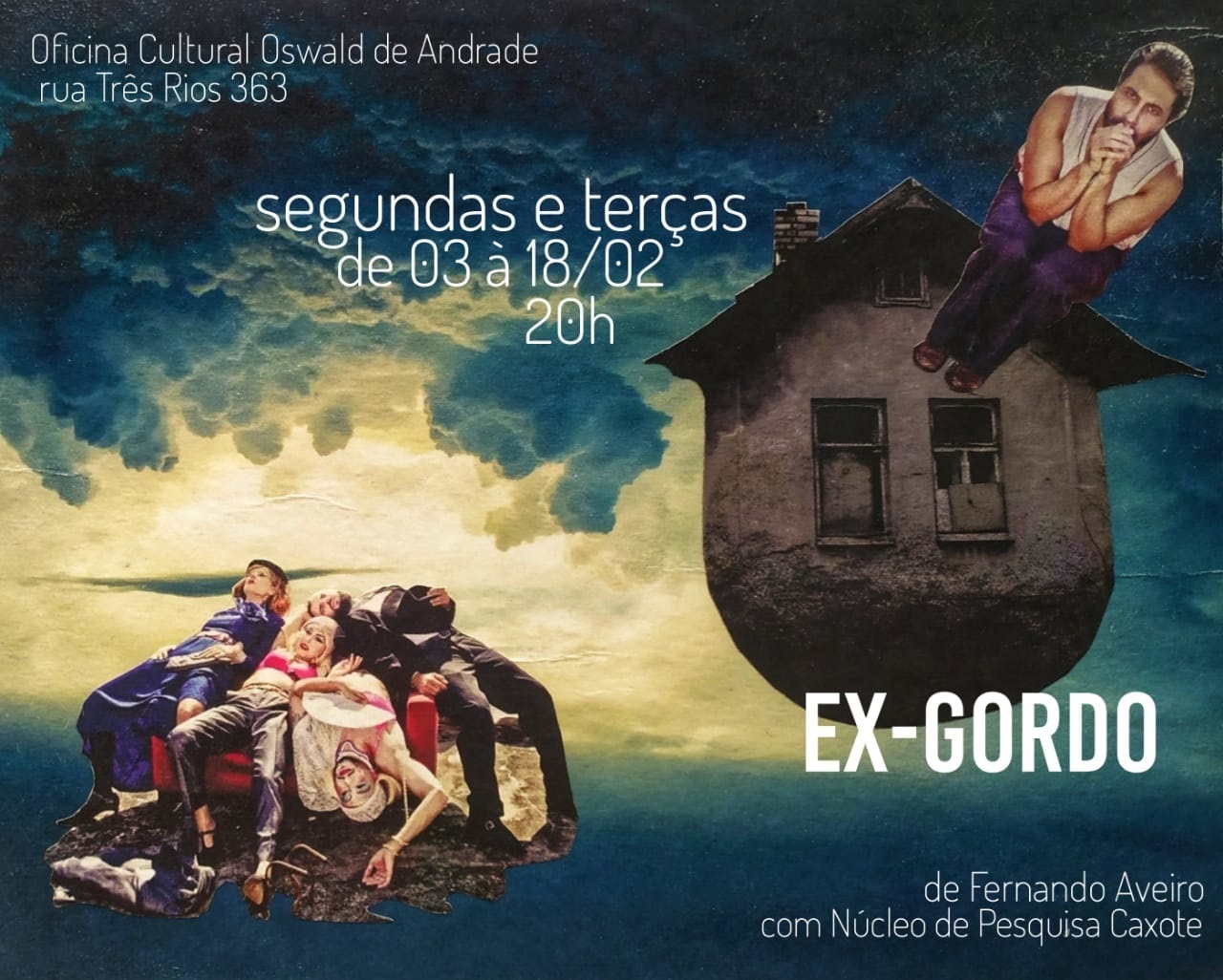 The play carries a number of the fine arts references, Theater and film, as "Hamlet", by William Shakespeare, the myth of Prometheus, as works of Marcel Duchamp, "The Venus de Milo", Alexander of Antioch, among many others. "Turns this piece a kind of glue, in all pillars: dramaturgy, direction, performance, costumes, scenography, Track and light to compose a work of dialogues between likely and unlikely worlds ", defines Aveiro. in the scenario, this notion is even more evident. There will be a memory created by Camilla Biondan panel with the function to represent the imaginary protagonist, creating a living geography that will be constantly updated throughout the assembly.

"Ex-fat" is the third part of the evolution Trilogy, Caxote Research Center design that features pieces that provoke reflections on the awakening of the consciousness of individuals to social processes that trap / mold and social standards that drive the human being which is essential or genuine. The other shows are "Does, razor" (2014), one text adaptation Plinio Marcos, and "Work on Ruins" (2017-18), written and directed by Fernando Aveiro.

The Caxote Research Center investigates the intimate theater and alternative spaces from the assembly of classic texts and new playwrights. In his works, explores the relationship between the performing arts and other languages.

Fernando Aveiro graduated in Performing Arts in Singapore and studied philosophy at the Federal University of São Paulo. Integrated CPT - Theater Research Center, directed by Antunes Filho, for six years, where he appeared in "Policarpo Quaresma", "The deceased VAPT-whoosh", "All Nudity Shall Be Punished" and "Prêt-à-porter Cult". He graduated as a playwright at the Center of Dramaturgy SESI-British Council, in which he wrote the text "in accordance". as a playwright, still stands the text "Host", directed by Georgette Fadel, showing in 2017 at SESC Consolação, in São Paulo. É diretor do Núcleo de Pesquisa Caxote, by which staged "Does, razor", and "Work About Ruins", with seasons in São Paulo and indoor. It is guiding the Qualification Program in Arts (Ademar War Project) State Government since 2017.

ABOUT THE RESEARCH CENTER CAXOTE

The Research Center was created in Caxote 2013 in order to investigate the theater in contemporary language, by works of classical authors and new playwrights. In addition, in their shows, seeks to integrate the performing arts and other languages, and investigate the alternative space and the intimate relationship between the audience and the scene.

In 2014, the group opened the first show: "By chance, razor", directed by Fernando Aveiro, Minimum Space, headquarters of the collective in Sao Paulo. This re-reading Pliny Mark's text fulfilled a season of three months in the capital and moved to Ribeirao Preto (SP) the invitation of chokes Cat Group, where he conducted performances at the Cultural Roof, Group Headquarters.

The piece was the starting point for evolution Trilogy, project consists of works that provoke reflection on the awakening of the consciousness of individuals to social processes that trap / mold and social standards that drive the human being which is essential or genuine.

The second show of the trilogy is "Work About Ruins" that fulfilled a season a month with 20 presentations on the SP Drama School - Roosevelt Headquarters in 2018. Written and directed by Fernando Aveiro, the show talks about a Being who decides to undergo a lobotomy to suit the standards imposed by society. The text "Ex-fat", also from Aveiro, terminating the project.

A former fat isolated lives on the 48th floor of a skyscraper and invites a group of actors to stage a weekly kind of psychodrama, he was the central figure of the story. Through theater, he invents various figures that mark your memory, hoping one day to find his true identity and to reintegrate into society.

Previous: The programming of February in the Education CCBB - Art & Education is lively and must!
Next: Sandra Gobert – “Art as a form of dialogue and communication”, by Edmundo Cavalcanti

Beck’s connects bars and emerging artists to bring art, culture and good news for the city of São Paulo

Tips for painting your home