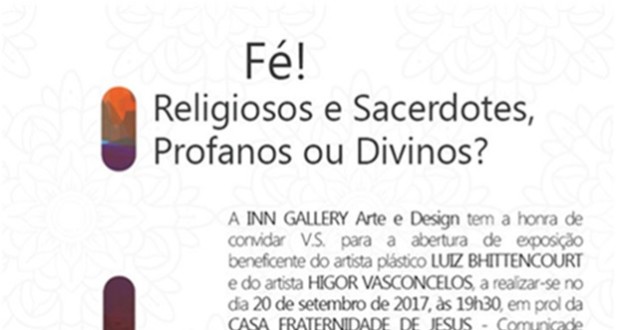 INN GALLERY presents the exhibition Faith! Religious and Priests, Profane or Divine? from Luiz Bhittencourt from 20 September to 07 October 2017.

Charity exhibition of artist Luiz Bhittencourt and artist and model Franklyn Val, on behalf of the Fraternity of Jesus House – Therapeutic Community in support of the drug and alcohol user.

“This exhibition ends a cycle of my life and art to start a new beginning, a new story.” Luiz Bhittencourt.

Luiz Bhittencourt exposure comes to question the faith that the lay lay in religious and priests with Holiness often false, in search of God.

He questions the Faith of religious and priests as profane or Divine and this questioning comes from your personal experience within the Church, during your monastic life, in contact with several bishops and diocesan priests.

In their 30 screens causes the spectator if question and think about the life of an absolute form, having the conscience that claim to God, He will hear and answer according to what is written in the Bible. 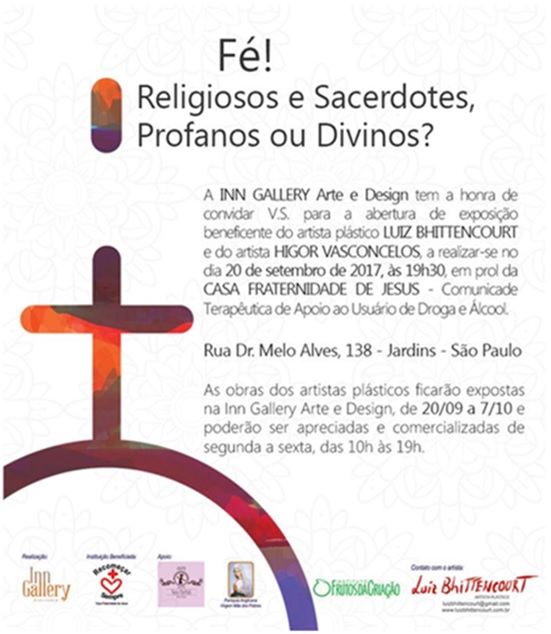 There goes the FAITH!

One of the works entitled FORGIVENESS at the FINAL MOMENT expressed the last time before God, where humanity has to strip all your sins.

The LOST FAITH in PRIESTS without SCRUPLES about the priests who fight and make profane acts and unworthy.

In restoration are wounded vessels, cracked, cracked by life time shaken with the insanities of the priests, trying to restore your faith in God.

And when we discovered that faith and we arrived in a work TABLE for ALL, where we find that we can be part of a church without discrimination and that the heavenly table always fit everyone without distinction as to race, color, creed, sexual orientation…

Then we entered the work HE, THEY AND YOU, the table of God with the chosen and with you worthy of everlasting life of peace and harmony.

In RESCUE for eternity the angels will rescue us from this world and take us to a greater glory, top, Divine.

And at the same time the profane HIDDEN INSIDE of the MONASTERIES and the churches shows what hides in the eyes of the laity.

And then he asks FAITH! RELIGIOUS AND PRIESTS, PROFANE OR DIVINE?

An incredible journey through the variations of faith and everything that involves the belief of each. And you think is DIVINE or PROFANE Act so? 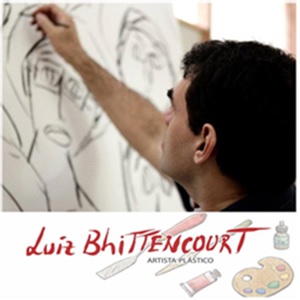 With works representing your great spirituality, Luiz Bhittencourt created his first works of the series entitled "Religion", exposed in 2004, on Bible passages that marked your life and led him to the monastery, living as a Benedictine monk until 2011.

During this period not renounced your art and created the series “Monastery” and “Inspiration in Iconography”, dealing with aspects of the faith and the mystical and also the series “Enshrined”, produced at the monastery, in order to clarify the spirituality and his works. His latest series is titled “Angels”, who, having always on the horizon looking for God, Figure your constant support beings spiritual quest.

Previous: Gilberto Salvador promotes meeting to talk about art with teachers from Campinas
Next: More art gallery promotes PORTFOLIO #4, The fourth Shows the space that has less than a year of activity