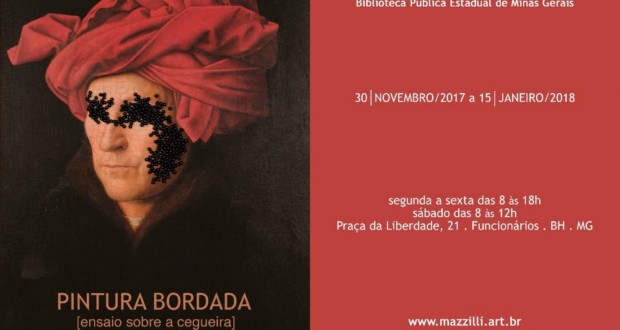 “The eyes look, and to see so little, seeking what should be missing and not find. " José Saramago

Galeria Paulo Guimarães Fields of Minas Gerais State public library presents the exhibition EMBROIDERED PAINTING of visual artist Sundays Mazzilli from the day 30 November. The exhibition is composed of 13 work carried out in 2016. It is printing fine art on canvas images of famous paintings in the history of art with delicate embroidery of pearls in the eyes of the figures portrayed context your vision.

Says the artist: “The exhibition EMBROIDERED PAINTING born after seeing the show .. BE SEEN in 2011, Fiat's House of Culture , presented from a clipping of masterpieces of MASP, in the eyes of the depicted was very present. Playing with the possibility of "look and not be seen" was the idea of embroidering pearls in the eyes of these iconic paintings of great masters of art history such as Vermeer – Girl with a Pearl Earring and Jan van Eyck – The man in the Red Turban – among others. "

Tysha José de Souza, master in architecture and urban design and professor of history of art and architecture, with emphasis in Iconology and Iconography, write the text of the exhibition.

"The parts that hides the eyes of every character portrayed combine with the nobility that the paintings exude. Delicate and with a luminous coating, sales are fundamentally artist-created gems, promising the function of ornament own of those who have the privilege of owning them and flaunt them.

We could take them for masks, disguises of personas we recognize, but they don't let the vision option to individuals previously immortalized, When your pictures were frozen and eternalized during your capture by original artists. Are really sales, with your totalitarian aspect and Choker.

Unable to face his admirers – us, the public-, masked celebrities keep their expressions that they attributed their authors. However, are definitely isolated from a possible eye contact with these new viewers. They are immersed in an involuntary blindness, which will be freed only if confronted to original versions. Devoid of the eyes and of the individual look, each figure depicted is a prisoner, at the mercy of the observer. We see them, and they could not react to what we see. "

This exhibition celebrates the 10 years of artistic career of Sundays Mazzilli that made your first exhibition in the Cultural corridor of the public library in 2007.

Muzambinho, MG, 1963. Graduated in medicine from UFMG with postgraduate studies in Psychiatry and art history, PUC. He studied Visual Arts at EBA – UFMG and fine arts at the Guignard school, UEMG, without, however, completing the courses. Has created a thought-provoking work like an artist from 2007, so with 43 years, When abandons medicine. Multimedia artist, transits for several brackets: makes objects and assemblages, old lingerie edge, kitchen objects and meat in addition to creating videos, facilities and fotoperformances. Did a tetralogy of pain through the embroidery. His recurring themes are the memory, the feminine, the domestic, the pain and the intimate. His alter ego éSusan the. Field, a curator of art. Did 18 individual exposures. Nothing and edge!, Palace of Arts, BH[2017]; Fotoperformances, Inimá Museum of Paula BH [2017], TRANS, Centro Cultural UFMG [2016]; Raw, Palácio das artes BH [2015]; I n @ s , in Cultural BDMG [2014] ; at the Viaduto das Artes, BH and House of tales, Ouro Preto [2015]; In the holds of reason on behalf of madness, Abílio Barreto Museum House [2009]; Corpoinstalação at Sesc Pompéia, SP [2008]; Storage, Casa da Xiclet Gallery, SP [2008], 40th ChapelArt, SP [2009] among other spaces as the catwalk Gallery and Cultural Paulo Campos Guimarães public library of MG . Lies in the District of Monkeys, Nova Lima, near Belo Horizonte.