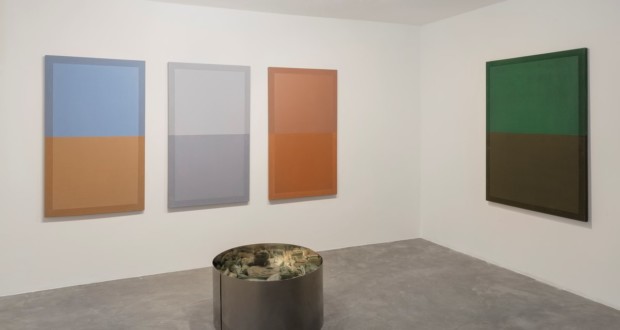 The Gallery features Marcelo Guarnieri, from 17 October to 14 th November of 2019, at its headquarters in São Paulo, the exhibition Amelia Toledo and Zé Bico (José Carlos Machado). Ze nozzle present in the room 1 one set of sculptures produced during the last four years, first displayed. Amelia Toledo will occupy Sala 2 with series of paintings “Horizontes”, produced in 2012 and “Well”, sculpture produced between the decade of 1990 and the years 2000.

Graduated in Architecture and Urbanism from FAU USP, Ze Bico (José Carlos Machado) produz e expõe como artista desde meados da década de 1980. In his third solo exhibition at Galeria Marcelo Guarnieri, Ze nozzle presents research on forces of attraction and optical effects developed in the last four years from a variety of procedures that gave rise to pieces of wood, glass and mirror. Having worked for many years with magnets in the production of his works allowed the artist to develop a practice based on subtle movements, exact calculations, generated not by theoretical methods, but empirical.

From the magnetic force of the magnets, Ze nozzle extends its investigation into balance and instability, exploring, through new objects, the gravitational force. Hence arise outstanding pieces made of wood that are linked together and run along a trajectory that goes from the top, close to the ceiling, a base to allow the land. The design of these outstanding pieces, incomplete cubes that only some edges are formed by, It is repeated in some other that make up the exhibition. Also seem disintegrated in pieces that remind us of fittings: more distant contour and the original cube size, parts are mounted on each other in different equilibrium positions. 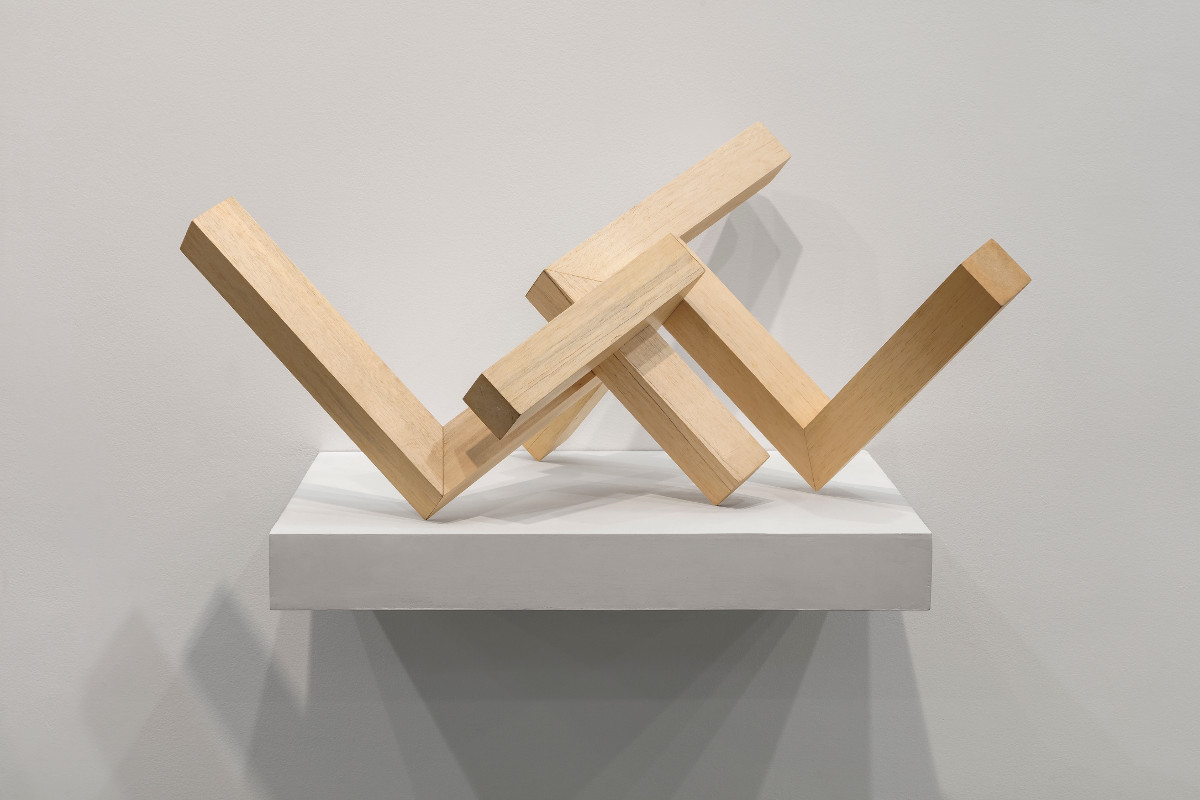 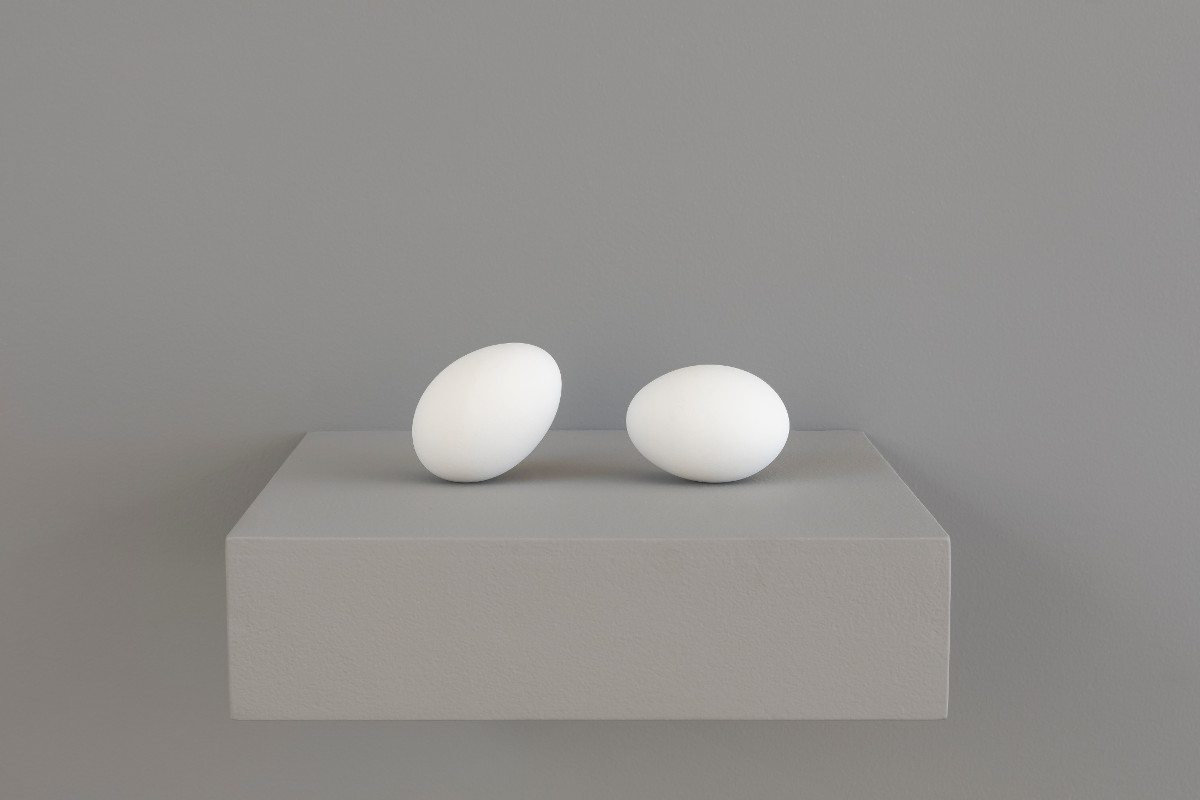 It's the parts in working with glass and mirror that takes the idea of ​​further disintegration. In “Piano”, the series “I have not seen” (2017/2019) It makes use of a tempered glass, depending on the distance at which you look, turns a mirror. In this way, iron cubes arranged on both sides of the glass, now unfold, now they are duplicated or disappear. In the positioning piece in a square aluminum plate overhanging front of a mirror also square same dimensions, It works not only with the effects of the reflective surface, but it integrates in a double composition that forms the shadow. Again matters relating to balance and instability appear, now associated with another branch of physics: to optical. The practice of Ze Bico, however, dispenses mathematical calculations and theoretical elaborations: their findings come from everyday experiences.

Going against all the right angles that make up most of the works show, It is the duo of goose eggs and lacquer. As time were paralyzed, They are balanced in an unusual way. Also contrary to other works in the exhibition dealing with empty and disappearances, the egg is the symbol of birth, a casing that stores a content full of possibilities. Having been produced for four years, double as seen is a result yolk hardening process associated with choosing the composition Ze nozzle. Although not touch, the arrangement of the eggs leads us to the idea of ​​weight and balance, as well as the previous sculptures that the artist made with magnets. “The Edge of the abyss” (2019) It is the same logic, in a weight ratio and balance between the wooden cube and brass bars. At the edge of instability, arouse in our imagination the possibility of the fall, as well as all other parts, They seem to be a close call.

Responsible for a production of more than fifty years, Amelia Toledo (1926-2017) contributed significantly to the Brazilian contemporary, having participated in the life of five editions of the International Biennial of São Paulo and won awards nationally and internationally. “Horizontes”, series initiated in the 1990, It is part of the research that developed throughout his career on the notions of landscape, both in the pictorial space, as in physical space. The skyline has a strong presence in the figurative Western painting tradition, serving as a point of reference in the construction of the image and the relationship that our body down with it. The paintings in this series are composed of two color bands that occupy, each, one half of the screen, lying at some point. According to the artist herself, this meeting marks “the limit to be or not to be”, such as “an empty space between two thoughts”. The tension between color tones so close sharing the same rectangle produces a type of vibration, though it causes a more immediate effect on vision, also mobilizes, to a longer look, other senses.

If the horizon can be thought of as that which gives limits to our vision, the well, on the other hand, can represent the infinite idea, what it does not have a screen as the eye can take hold. Get to “rock bottom” It means going too far, accept the condition of defeat, meet what's more gloomy in us - or what is deepest on Earth: o inferno. On the other hand, go beyond the horizon can have meaning to push the boundaries of invention, winning wings and reach an ethereal place. Well Amelia Toledo, however, It is formed by a curved sheet metal that expands the reflective properties of the crystals, reversing the logic of common sense and perhaps approaching the image of the magic well. The study on the depth of the visual field in “Horizontes” It develops through the paint on the canvas, It materializes in “Well” through the encounter between two materials of different origins, together, cause the expansion of space and further stimulate the approach of the observer. 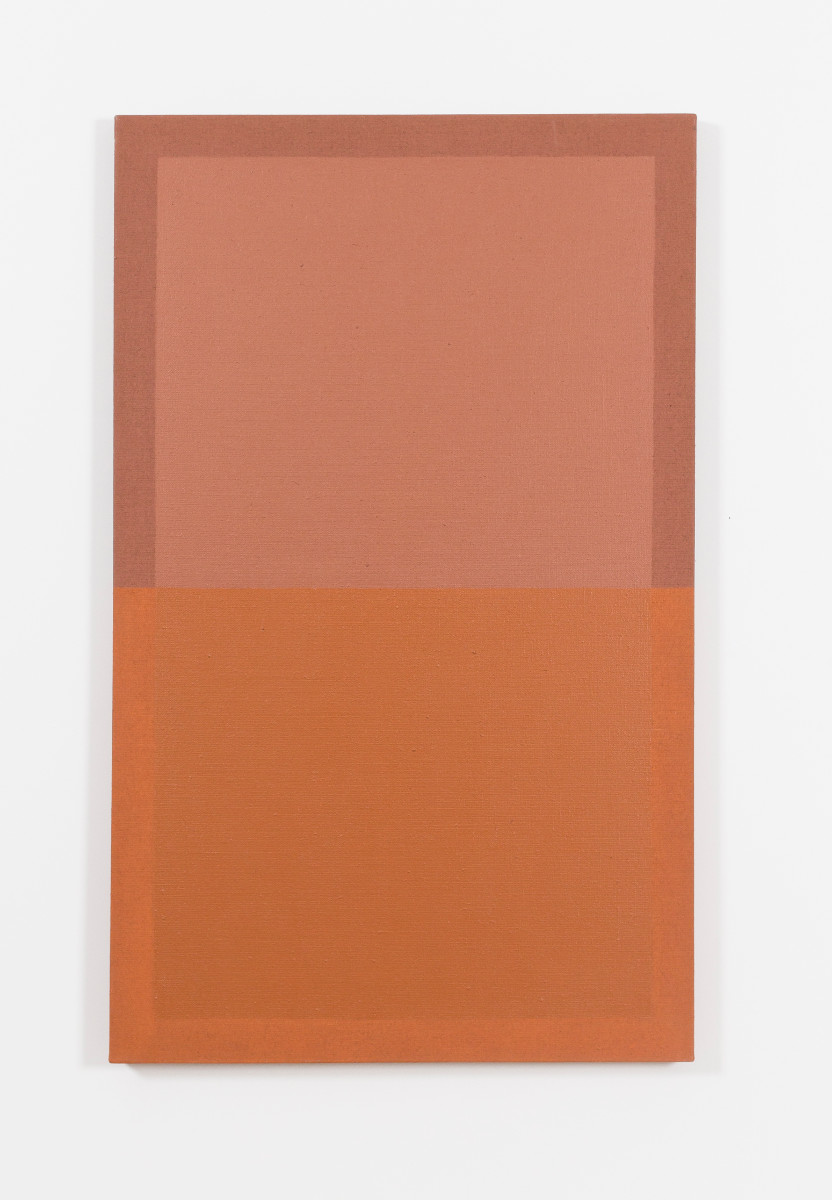 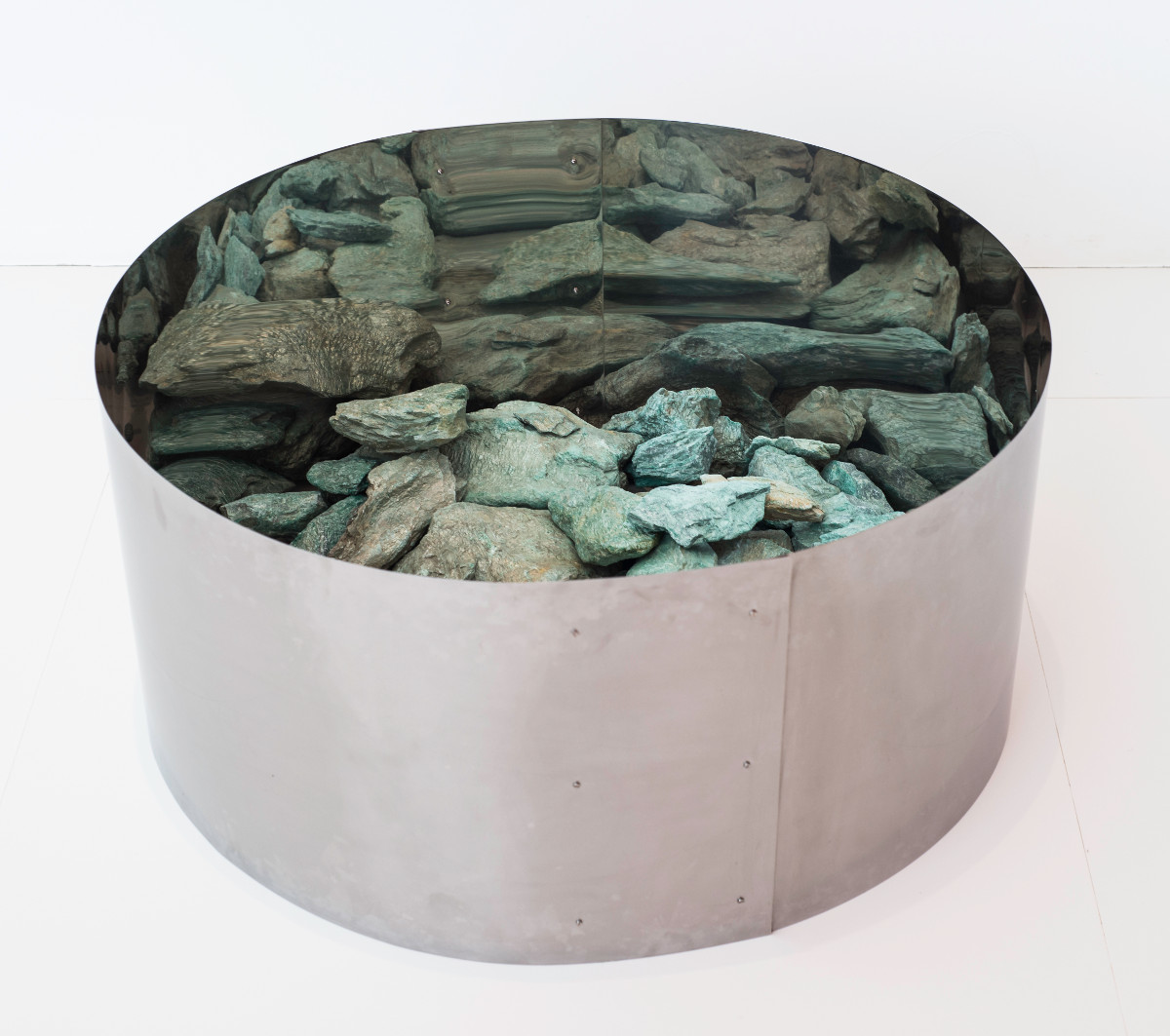 The meeting of industrial materials and organic matter is a frequent in Toledo production, practice that can be understood as a way to question the structure of dualistic thinking that governs the way we understand the world, where nature and culture occupy opposing categories. Constantly shifting between the formal control and intuition, Amelia Toledo investigates the relationships we build with the space from our sensitivity to colors, substances, volumes, textures and dimensions.

Previous: São Paulo will meet on the Shroud of Turin from the Holy, Art and Science
Next: The 12th edition of the French Alliance Song Festival 2019 reaches semifinal