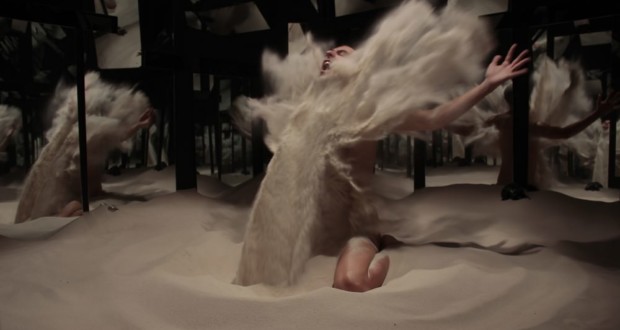 Terrarium - Prive DANCE IN A PORTAL
INTERDIMENSIONAL part of the artist's relationship with body
mirrors, light and sand and takes sensory experience to the public

In Terrarium - Prive DANCE IN A PORTAL INTERDIMENSIONAL the artist Curitiba Maikon K works on the borders between performance and dance, theater and ritual. The action makes presentations days 23, 24 and 25 February, Friday and Saturday at 21:30 and Sunday at 18:30.

The focus of the art Maikon K is the body as establisher of realities and the boundaries between human and nonhuman. The action continues the research of the artist also present in DNA DAN, selected by the artist Marina Abramovic to integrate exposure Communal Land, in March 2015, at Sesc Pompeii, in São Paulo.

Structured into two distinct parts, the performance is about observing and being observed, without however letting touch. The action name refers to the container that recreates the environmental conditions for breeding animals and plants, out of which it is possible to observe the behavior of living beings inside.

Secondly, Maikon K enters no cube. This black box is lined with sand and mirrors cover the walls. A microphone is positioned at the ceiling and the sounds produced inside the hub out of speakers outside, manipulated by the musician Beto Kloster. The audience is placed in the position of voyeur and watch the performance through small windows, choosing where you want to look, capturing pieces and reflections of the body which there moves. The game of mirrors allows the viewer to create different perspectives. The artist relates to the sand and unearths pieces of clothing: a leather harness and a black skirt. "In this peep show xamânico gradually building a persona, emerging through my voice, breathing and movements. A set of mirrors where the public observes and is also observed. Contemplating the appearance and death of successive states and images ", account the artist.

To Maikon K in the present world and webcam snapshots, capture, We select and offer our image of a crowd of eyes. Image that is spreading unchecked, viral. "We can communicate with the world from inside our room, car, WC, prison. And the world comes to us, optical fiber, sorbed by the retinas glazed. We consume a world-image, and we are consumed by it ", believe it.

How sensitive field of experience, art has power to form heterogeneous poetic territories, where coexist freedom of speech and expressions of various freedoms. Through this activity, SESC reiterates its commitment to culture and education, to bring up productions and artistic processes that discuss freedom of expression concretely, in their overlapping with the freedom of bodies - that needs to be built permanently.

Natural Curitiba - PR, 1982. It works on the borders between performance, dance and ritual. The focus of his research is the body as establisher of realities and symbolic matrix. His training began in 1997 the Performing Arts and adds several areas of knowledge: degree in Social Sciences (emphasis in Anthropology Theater), thirteen years research ways of expanding consciousness through bodily practices and ancestral rites in connection with the elements of nature. In Guillotine (2008) – shamanic-terrorist musical for an actor in the classroom - the action took place in a university hall. In 2011, as a resident artist Casa Hoffmann (Movement Studies Center), held Gesture and Voice Landscape, in that integrated movement and vocal sound to generate archetypal forms. In 2013, created Ancestral Body, in investigating the dance as a means to achieve expanded states of consciousness. In the same year he debuted the dance-installation DNA DAN, contemplated by Funarte Award Klauss Vianna 2012. Both works investigate the boundaries between human and non-human. In 2015, created a second version Ancestral Body and debuted Terrarium - an interdimensional portal privê dance, that uses mirrors and sand materials such as. Your job is to center the body and your ability to change perceptions, influenced by the worldview shamanic, wherein the performer unfolds in different situations through specific physical techniques, by Song, non-verbal sound, dance, Visual signs and ritualised activities. In 2015, He was invited by the artist Marina Abramovic's performance to present DNA DAN on display Communal Land, in March / May 2015, at Sesc Pompeii. For the year 2016, prepares his new job The Solar Anus, awarded the Prize Funarte Myriam Muniz 2015 and inspired by the literature Georges Bataille.

Previous: Lu Mourelle - “One touch, lyrical and smooth, as singing of a bird, his features and colors” by Edmundo Cavalcanti
Next: cultural production brings together art and solidarity for Cafu Foundation