Home / Art / #MAS promotes Free Course: “Introduction to Art History: From the Renaissance to the Vanguards” 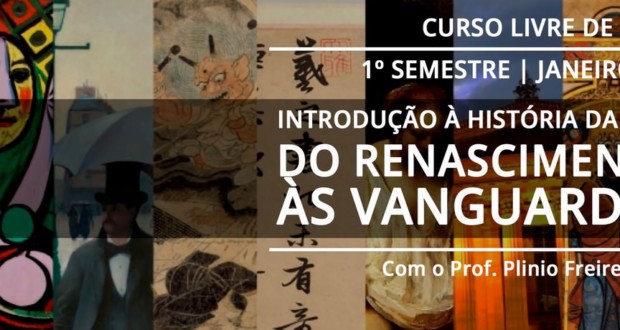 #MAS promotes Free Course: "Introduction to Art History: From the Renaissance to the Vanguards". Disclosure.

#MAS promotes Free Course: “Introduction to Art History: From the Renaissance to the Vanguards”

A Museum of sacred art promotes a summer school on the theme “Introduction to Art History: From the Renaissance to the Vanguards”, with the Prof. Plinio Freire Gomes.

Divided into four independent modules, the course visit a wide range of art forms - from the Renaissance to the Post-Modern. historically, this time bow was marked by the dominance of the technical-scientific thinking and an unprecedented sense of historical acceleration, which became known as "Modernity". Another critical feature of the period was the transformation of Europe into hegemonic center of the economy and world culture. But such a phenomenon has not silenced the alternative expressions, that under various labels (wild, colonial, underdeveloped), They continued to flourish in the rest of the world, so-called "periphery".

I) affinities cosmological: Renaissance and Mannerism
Guided by the geographical explorations and a new view of the universe, o checks. XVI builds the foundations of modern science. However,natural phenomena have not yet been dissected and disenchanted by the Cartesian method. Unlike, the micro and macrocosm are interwoven in fertile and subtle affinities. The Artist, in this context, It is not only the vehicle of exceptional sensitivity; is rather a wise man who speculates on the world as any man of science.

II) À shadow Leviatan: Baroque
in secs. XVII e XVIII, with the colonial trade and the formation of nation states, European hegemony consolidates. Among the fundamental data of absolutism, It highlights the growing assemblage of the arts for the benefit of power. It is the era of official artists and Academies, regulating genres in predefined categories and hierarchies. This new system, had for universal, radiating around the world. But his image, outside Europe, deforms and fractures.

III) The advent of Modernity: academic, Romantics and Impressionists
The scientific method finally prevails, feeding and conducting with its technical industrial production. Not politically, the bourgeoisie supplant the aristocracy in meioao cry of revolutions. Meanwhile, the ideal of progress becomes a kind of secular religion - and seems to accelerate the hands of history. Here are the components of a new word, saturated promises and amazements: "Modernity".

IV) vanguards: enthusiasm and exhaustion
Start of the century. XX, in the wake of a brief interlude of self-confidence. But the progress of certainties give way to war and destruction never seen scales. Vanguards succeed and run out, unable to synthesize the features of a time permanent art derretimento.A, increasingly monetized and insignificant, becomes avatar of financial economics.

Módulo I – affinities cosmological: Renaissance and Mannerism
– Class 1: Apogee of Renaissance.
Julius II commissions Michelangelo and Raphael. The Sistine Chapel and The Room of the signature. Featured works: Rafael,Resurrection of Christ.
– Class 2: Dialogue of hermits.
The two decisive traditions of the century. XVI, Italian and Dutch, continue to create original solutions. Featured works: Bosh,Temptations of St. Anthony; and Mantegna,St. Jerome in the desert.
– Class 3: The picture seductions.
The picture between sentimentality and dynastic celebration. Titian, Hans Holbein and miniaturists of the Moghul Empire. Featured works: Portrait of Cardinal Madruzzo.
– Class 4: Illusions in the darkroom: painting and optics.
Vermeer, Rembrandt, Franz Hals. The glory of genre painting.

module III – The advent of modernity: academic, Romantics and Impressionists
– Class 9: The Revolution and its shadows.
The revolutionary parable, between hope and tragedy, David on French screens and the Spanish Goya. Featured works: Portrait of the Countess Casa Flores and Carlos VII.
– Class 10: The exoticism invades the Fine Arts.
1815, the Congress of Vienna redraws the maps and sensibilities. The revolutionary anti-modernity of Ingres. O orientalista exotismo, with Jerôme, and tropical, with Debret and Taunay. Featured works: Angelica; Native stream through a.
– Class 11: Modernity becomes aware of itself.
1848, the resumption of utopian impulses. Pre-Raphaelites, the first challenge to industrial modernity and the avant-garde harbinger. The landscaping Caspar Friedrich.
– Class 12: The public disturbers: the era of easels.
The color revolution of the Impressionists. Two artists in countertrend: Manet and Degas. Featured works: Portrait of M. Desboutin, Four dancers on stage.
– Class 13: prisms: spectrum dilates.
The post-impressionist twist: Seurat, Gauguin e Van Gogh. Featured works: The school and poor fisherman.

Professor
Plinio Freire Gomes He is the author of “A heretic is going to paradise” (Companhia das Letras). He graduated in history and a master's degree, at the University of São Paulo. Lived for nearly two decades abroad, between Europe and the Middle East. Lectures in museums MASP, Sacred Art Museum and Mam; and in institutions such as Casa do Saber, Centro Universitario Maria Antonia, Arab Culture Institute and earrings (Hellenic Culture Center). Six years ago coordinates the group of "Art Studies”, also acting as a founding member of the collective Cultural Lens, Bookshop Martins Fontes. Currently presents lectures and courses on art history, focusing on Hellenistic, Roman and Renaissance. But his main area of expertise is the Islamic culture. also participates, skilled in the condition, traveling projects focusing on countries like Italy, Spain, Morocco, Iran, India, China and Japan.