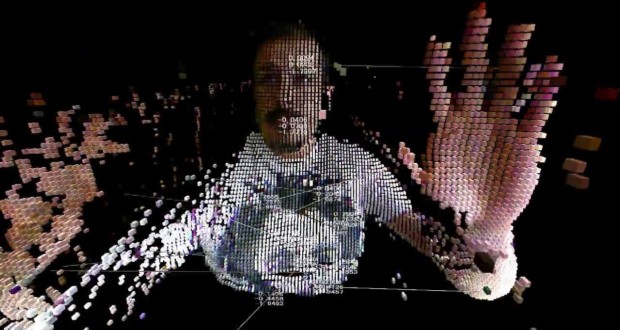 Between 9 and 11 of June, attendants can check the result of the residence of five
artists with works that explore multiple languages, In addition to performances and workshop

São Paulo-June 2017 – To present new research and discuss prospects for the language called expanded audiovisual, the Cultural Center of São Paulo receives the first Shows of the AVXLab between 9 and 11 of June, with free entry. The programming features works and performing instalativas novel five resident artists and guests. The show's sponsorship of Spcine AVXLab and seeks to explore new frontiers of narrative construction, immersive experiences, and the dialogue of art with contemporary audiovisual language, that goes beyond the limits of cinema and television.

The works of this universe's most experimental use of technical innovations and languages for video mapping, videoart, Live cinema, virtual reality, interactive environments, In addition to demonstrations that dialogue with the dance, the performance, the theater, music and also with the urban space. The architecture itself of the Cultural Center will be part of this audiovisual experience.

The AVXLab is a laboratory of ideas, methodology and expanded language testing of the Brazilian audiovisual, an initiative that was born of ALTav members (Audiovisual Network Expanded) to act in the production of projects aimed at experimentation and knowledge generation, who value not only the final presentations but put the process and research of creation as a fundamental part of a work. "The audiovisual sector today works in networks, infinite canvas converse with machines and people are exploring these other possibilities. We seek that Shows discuss, from the practical experience, not only the way, but also the logic of the use of contemporary audiovisual ", comments Demetrius Portugal, co-curator and Executive Director of Shows AVXLab.

Among the artists participating in the Show are Leticia Ramos, that comes from a series of exhibitions and residences and also with open solo exhibition at galeria Mendes Wood in São Paulo; the duo Mirella Brandi X Muep Etmo develops audiovisual project that has a light as a standalone language; the digital artist, musician and curator Henry miner Roscoe, exploring, along with Gaius Fazolin, paths of generative art and visual music, investigating the relationship between sound, image and symbolic narratives.

For Lucas Bambozzi, co-curator and artistic director of the project, the artists chosen for this first experience dialogue with a range of languages. "Among the several opportunities to see works involving informational spaces we are putting focus on three strands: a linked to sensory environments, What would be a kind of cinema without images, another associated with algorithms and database, and another connected to a mutual influence between cinema and Visual Arts ". The curators ' choices for both the names of the artists, as for the topics of the seminar, reflect these practices. The show is the result of five years of actions for strengthening the audiovisual sector expanded by the Government, conducted by members of the Group ALTav.

In three days, from 10 to 22 hours, the public can check the facilities in the space Mission and workshops of the CCSP, with Caio works Fazolin, Leticia Ramos and Henry Roscoe, In addition to works by artists invited. Caio and Henry are developing together, during the residency, the work "Protocol" from data available on the internet.

Gaius Fazolin is audiovisual artist, programmer and VJ (Micra), computer languages research and your relationship with the culture. Databases, lines of code and computational systems are the source for the research unfolds in audiovisual performances generativas, immersive and interactive installations, In addition to large urban projections. Has gone through important festivals of new media as: On_Off, FAD, URBE, Live Cinema, Visualismo, Eletronika, Amazon Mapping Festival and multiplicity.

Already Leticia Ramos will make the installation "Trap" in the central garden of the Cultural Centre. In his works of artistic investigation she creates photographic apparatus for motion capture and reconstruction. His works have been exhibited in art spaces like Tate Modern and the Nouveau Musée National de Monaco.

In addition to the works produced specifically for the AVXLab, the show also includes works by the Argentine filmmaker and artist Andres Putting, working with loops of super-8 movies, and the Uruguayan artist living in Brazil, Fernando Velázquez, with jobs that dialogue with the themes explored in the activities of the AVXLab.

Mirella Brandi is a multimedia artist and designer and musician Etmo Muep, composer and sound engineer. Together, explore through image and sound your narrative capacity and perceptual processing in immersive installations and performances since 2006.

In the three days of the AVXLab the public may participate in the seminar "Informational Layers" in the room Paulo Emilio, the Spcine Circuit, in tables that will bring together researchers, artists, intellectuals and interested to reflections on artistic processes, technological and informational flows, among other topics. Will be made available 80 slots per day. Participation is free and the registration can be made directly on the site avxlab.org

On 9, the opening of the exhibition will take place from 18 to 19 hours. The first table of the seminar, from 19 to 22 hours will discuss the film in your abstract forms and essentiality. Will be attending Mirella Brandi x Muep (resident artists of AVX Lab), Claudio Bueno (artist and researcher), Mario Ramiro (artist, Professor ECA USP), Lucia Koch (artist) and Lucas Bambozzi (artist, co-curator of the AVXLab, acting as mediator).

On Saturday, from 15 to 18 hours, the issue will be the movies generated by complex systems from informational data. This table will be attending Henry Roscoe and Gaius Fazolin (resident artists of AVXLab), Fabio Malini (researcher UFES) and Eduardo Fernandes (Technical Director of AVXLab, acting as mediator).

In the last day, Sunday, the seminar will discuss the interrelationship between cinema and Visual Arts, Emphasizing the creation of physical works influenced by the use of film, projection systems and physical objects with the artistic process in gathering with the dematerialization accentuated by digital processes and in online mode. At the closing table, the seminar will be attended by Leticia Ramos (artist in residence AVXLab), Andres Putting (BIM – Biennale de la Imagen en Movimiento), Fernanda Person (artist, filmmaker), Roberto Cruz (independent curator, creator of Double Gallery), Demetrius Portugal (co-curator of the AVXLab, acting as mediator).

ALTav today has more than 200 active members. It is formed by artists, curators, cultural managers and producers from Brazil, all with the common goal of promoting the development of the audiovisual scene expanded, your interaction with the urban landscape, participation in artistic circuits aimed at technology and new languages and thus aims to create interest and bring people together this global cultural movement.

The Spcine is the company of cinema and audiovisual de São Paulo. Acts as a Development Office, financing and implementation of programs and policies for cinema, TV, games and new media. The goal is to recognize and stimulate the economic and creative potential of audiovisual paulista and your cultural and social impact. The company is an initiative of the Mayor of São Paulo, through the Municipal Secretary of Culture.

Previous: RioZoo offers week of free lectures on World Environment Week
Next: Collective exhibition “3 the A” opens in LAPA next Saturday (10)