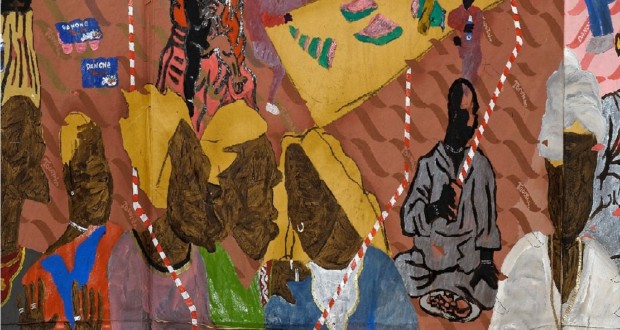 The Art Museum of the river-SEA, under the management of the Institute Odeon, opens on Tuesday,26, at 10 am, "Pardo's Paper", individual young carioca artist Maxwell Alexander. The exhibition reaffirms the vocation that the SEA has achieved in six years of existence: face the mirror, recognize, listen, say what interests and pursue. These are tasks for a museum that stands in dialogue with the city and its vicinity. The opening event will have free entry and will also feature musical performance of rappers BK 'and Bacchus Blues Eshu on stilts, at 8:0 pm.

At the age of 29 years, Maxwell Alexander portrays in his work an urban poetic passing by the construction of narratives and scenes structured from their daily experience the city and in Rocinha, where was born, works and lives. With works in the collection SEA, Pinacoteca de Sao Paulo, MASP, MAM-RJ and Perez Museum, Maxwell presents "Pardo is Paper" in Brazil after taking his first solo exhibition at the Museum of Contemporary Art of Lyon, in France. Result of an artist residency at the Delfina Foundation, in London, the show is sponsored by the Institute Inclusartiz, de Frances Reynolds, and is sponsored by PetraGold.

The early 'Pardo is Paper' refers to May 2017, when the artist painted some self-portraits in brown sheets of paper lost in the studio. In this process, besides the powerful aesthetic seduction, he realized the political and conceptual act that is articulating to paint black bodies on brown paper, since the "color" brown was used for a long time to ensure the blackness. "The brown design found in birth certificates, in curricula and black ID cards of the past, It was necessary for the redemption process, in other words, whitening of our race. However, nowadays, with internet, debates and awareness and claims of minorities, blacks started to exercise his voice, to be understood as black and boast, assuming your nose, your hair, and building their self-esteem by exaltation of what is, from yourself. This phenomenon is so strong and relevant, that the concept of brown now gained a pejorative sound within the black collective. Tell a black it is dark or brown can be a big problem, since, Pardo's Paper ", Maxwell notes.

"I am delighted and proud to present this young talent. Maxwell is a natural leader, It has great ability to attract young people from other languages, managing to unite the forces and all the new experiences of young people who are the future of Brazil. The beautiful work of Maxwell brand sensitivity of the social reality of Rio de Janeiro ", analisa Frances Reynolds, president and founder of the Institute Inclusartiz, which seeks to bring about a dialogue between all segments of society and artists, especially young people, promoting your career and supporting strategically internationally.

Marcelo Campos, healing associated SEA, the museum, to bring this roaming, ratifies modes, sensations and places with which interests dialogue: the school, the fun, the museum, Laje, a family room, the street, a Igreja. "All of this is presented in the artist's paintings. The museum, then, rethinking as the distinguishing sign, and the inclusion in it becomes goal. historically place of display of goods, the museum that interests us continue to reverse the periphery, turning it into self-esteem ", says Marcelo.

Previous: Philosopher points out that the feeling of sadness can be a path to creativity
Next: Orchestra Guerra-Peixe and Interculturalidades present in Leila Diniz Culture Room