“twelve artists: the main concerns of our times and the fantastic feeling of being alive”

The second event of the Project Contemporary LIGHT, Hope, brings the feeling of welcome, look forward, of welcome. “Seen through the lens of diverse contemporary artistic practices, Hope is a curatorial kaleidoscopic observation seeking an answer to 18 months of pandemic. for many of us, last year seemed to drag on, slowly and painfully. It was a time of waiting and hope, a time of self-reflection. A period that awakened consciences, both personal and collective, in response to a global health crisis; how each of us relates to each other and how we share our collective health", explains the curator Simon watson. As a theme for the exhibition, one of the concepts that interconnect the works are the multiple ways in which the artists' hands and bodies are present in the creation of these works of art.. "By reaffirming your presence, these artists confirm our existence as humans and, with the presence of your hand we are reminded of our impermanence, the fragility of our lives. And because they are works of art, have a permanence in the record of our time. In the presence of the artist's hand, we find personal signs on purpose, determination and hope”, concludes the curator.

As an additional gift to the public, Simon watson invited critics and curators from the cultural circuit to write about the works exhibited by each of the participating artists: “as a foreigner engaged and in love with the contemporary Brazilian cultural scene, I am very impressed with the new wave of Brazilian art critics and curators that, on its own, are forging a new version of art history, seen through new and varied perspectives. Asking provocative questions about who is missing and why, his energetic investigation is provoking and supporting artists and diverse artistic practices. My interest in this new wave led me to invite art professionals to do rehearsals for each of the 12 artists Hope”.

The 54 works – two-dimensional, three-dimensional, technological – from Hope, that cover different techniques such as watercolors., paintings, grafitti, sculptures, photographs and video performances, are displayed in the temporary exhibition hall of the MAS / SP as well as in its internal garden – Jardim do Cloister – as a toast of shapes, colors and invitation to be close. 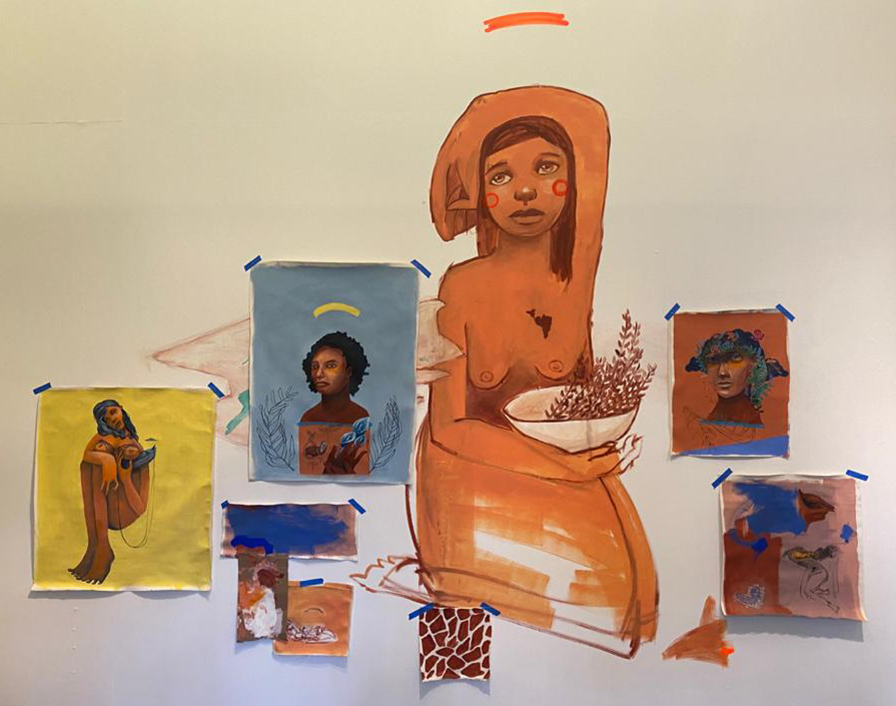 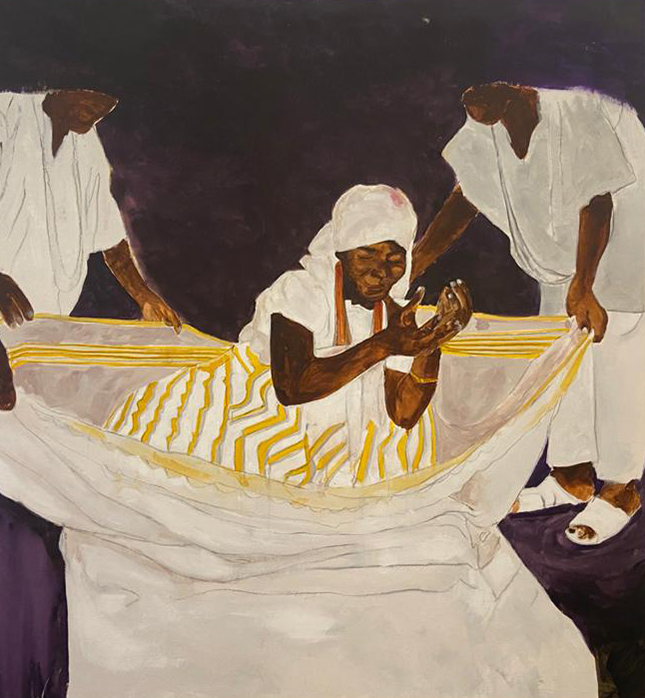 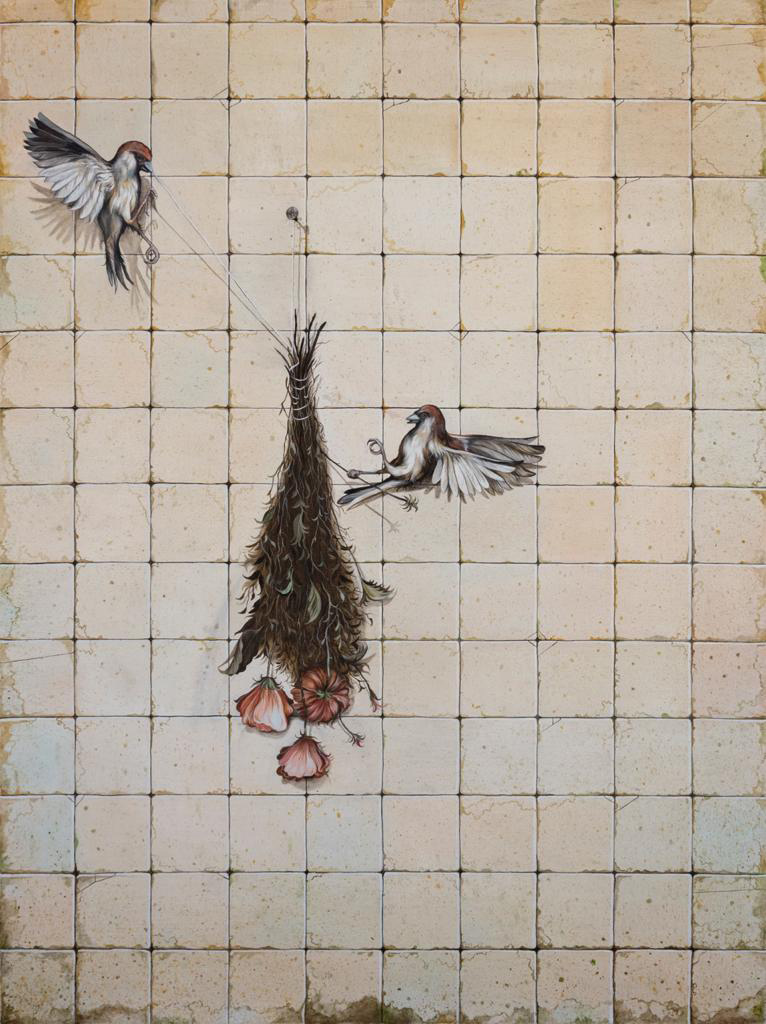 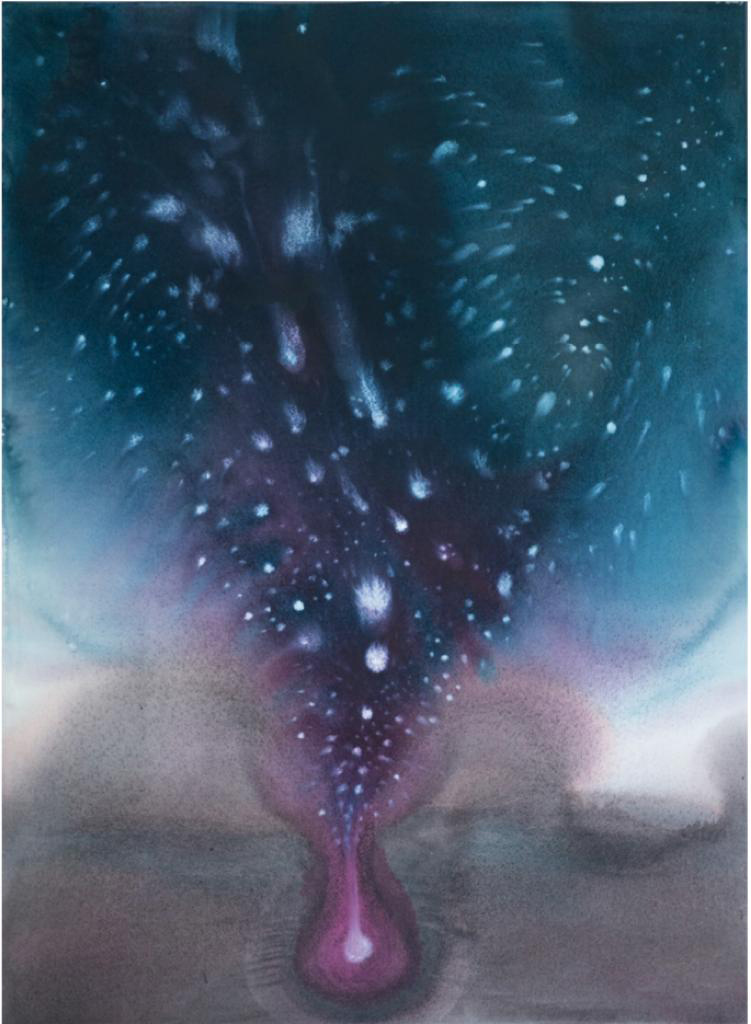 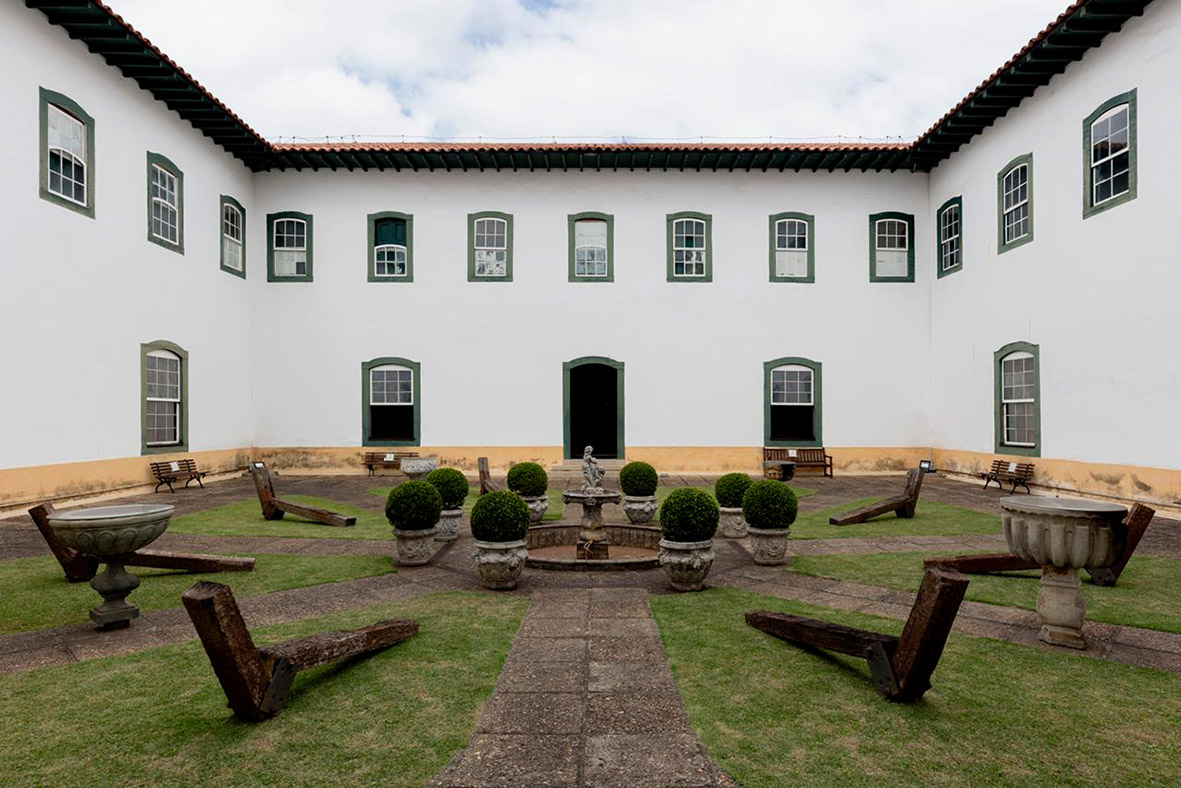 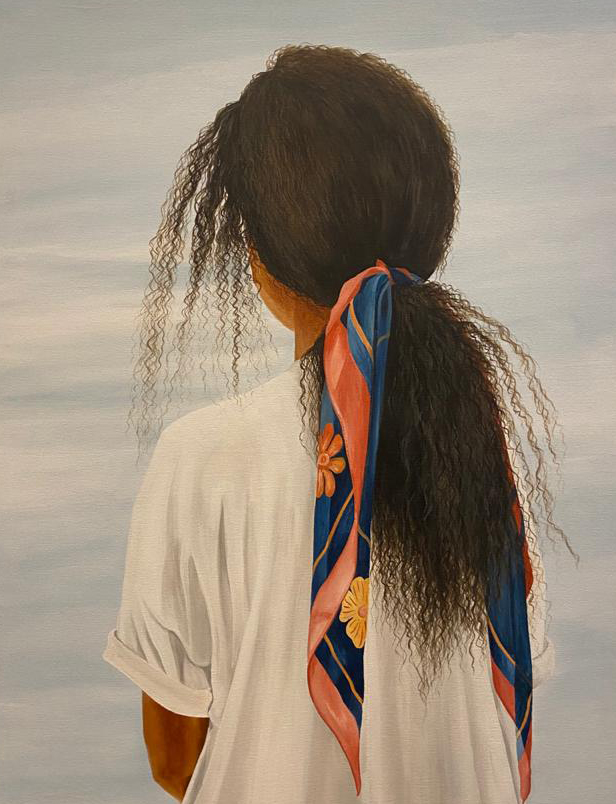 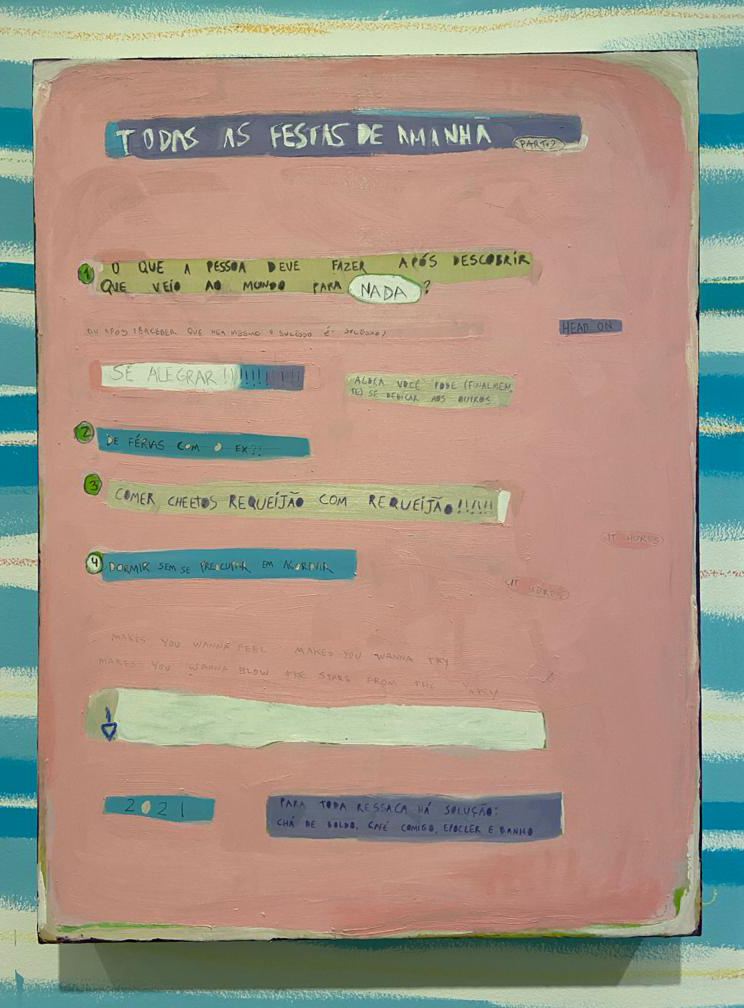 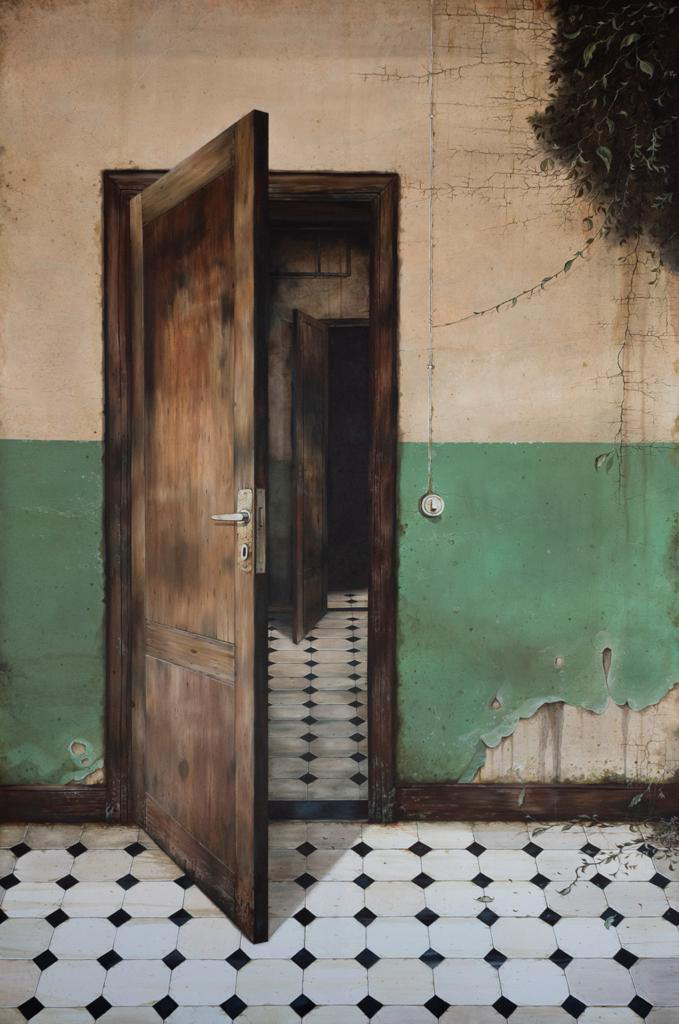 The work of Andrey Rossi suggest a quiet meditation in a fictional hospital ward. The drawings are highly detailed and form the basis of a continuous cycle of paintings that, as dark as it sounds, they are strangely seductive and convey a powerful message and act as a meditation and celebration of the human impulse to overcome tragedy and discover life in the most unlikely of places.. Unfolding primary materials is Leandro Junior whose figurative paintings in liquid clay are inspired by the culture of the Jequitinhonha valley where he grew up and the material he used to paint. His portraits invoke poignancy and sadness, as well as feelings of empowerment, for the figures seem to be contemplating the light of a blue sky day.

Much like a contemporary oratory, Scruffy makes intimate scale acrylics painted on scrap wood. They are acts of personal meditation, a reflection of everyday suffering, often permeated by the presence of natural light and radiant skies. Themes of the cosmos can be clearly felt in the terrestrial and landscape paintings of Yasmin Guimaraes. small scale, examining seemingly microscopic details or on larger, more robust screens, she is a world of magic and wonders in the natural world. Moses Patrician presents itself with a large-scale painting depicting a black woman dressed in white in a performative ritual of birth and rebirth A moving and celebratory moment.

Hope features three murals site specific on the museum walls. Two of the murals are at the ends of the exhibition room. On the other hand, a female figure painted by either Magrela and the other, a male shaman figure painted by Enivo. either Magrela is inspired by the turmoil of urban images and the mixture of Brazilian cultures. The image depicts a world of gentle giants, women who are powerful and dominating, but still keep a vulnerable intimacy in their eyes., as well as in your posture. Enivo is present in São Paulo's street mural scene, and became known for his studio practice paintings “futuristic aliens”, which in this exhibition sees the union of the two, a huge mural of a futuristic shaman-like figure of optimism and hope installed with a cluster of resin paintings.

Ana Júlia Vilela creates a third mural in the center of the exhibition room where it combines direct intervention on the wall and a cluster of canvases. she plays with the viewer, revealing just a few threads of pictorial investigation, all interrupted by text fragments that resemble a tweet or the casual exchange of a brief conversation.

The theme of fire and fiery resurrection has been a recurrent element in the widespread practice of Thiago Rocha Pitta. His watercolors suggest a mythical and fiery world balanced between the apocalyptic and the hallucinogenic. Equally hallucinogenic is a performance of Lidia Lisbôa. His sculptures from Cocoon are a gentle version of his lifelong mediation on the theme of anthills found throughout Brazil. The exhibition includes the video performance Dawn.

The overarching theme of the exhibition is most vividly portrayed in the performance video “When I have food in my hands" Paulo Nazareth. Set against a clear blue sky, it reminds San Francisco how the action of hands raised with food and birds scurrying and feeding seems so generous, so fragile and so important.

Hope ends in the inner courtyard with a seven-part wooden sculpture of sleepers created by João Trevisan. The work invites the viewer to sit down and, when doing this, you first become aware of the architecture and, then, fully aware of the existence of heaven.

“View through the lens of diverse contemporary artistic practices, Hope is a curatorial kaleidoscopic observation seeking an answer to the months of pandemic". S.W.

Idealized by the curator Simon watson, Contemporary LIGHT consists of 12 exhibitions - individual and / or collective - of contemporary artists to be developed, in partnership with the Museu de Arte Sacra de São Paulo, where diverse themes will offer proposals and challenges to the invited artists seeking conceptual and material dialogue with works from the institution's collection… or not! Each show is unique in its own universe. 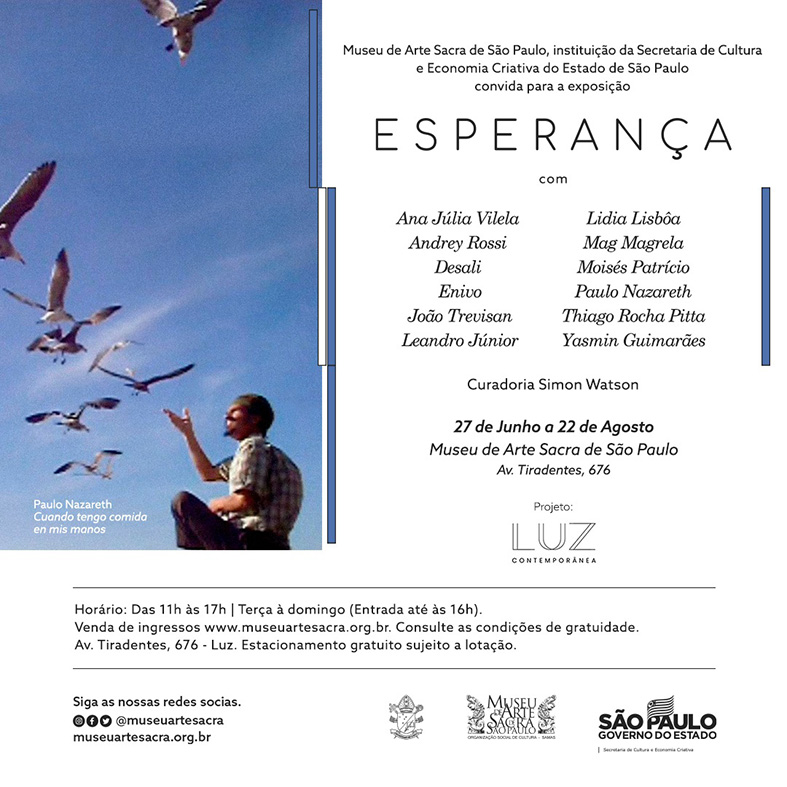 Born in Canada and raised between England and the United States, Simon Watson is an independent curator and cultural events specialist based in New York and São Paulo. A veteran with thirty-five years of experience in the cultural scene on three continents, Watson conceived and curated more than 250 art exhibitions for galleries and museums, and coordinated consulting programs in art collection for numerous institutional and private clients. in the last three decades, Watson worked with emerging and unrecognized artists, bringing them to the attention of new audiences. Her area of ​​curatorial expertise is identifying visual artists with exceptional potential, many of which are now internationally recognized in the blue-chip category and are represented by some of the most famous and respected galleries in the world..

The Museu de Arte Sacra de São Paulo, institution of the Department of Culture and Economy of the State of São Paulo Creative, It is one of the most important of its kind in the country. It is the result of an agreement signed between the State Government and Mitra Archdiocese of Sao Paulo, in 28 October 1969, and its installation date 29 June 1970. Since then, the Museu de Arte Sacra de São Paulo He came to occupy wing of the Monastery of Our Lady of the Immaculate Conception of Light, on Avenida Tiradentes, downtown São Paulo. The building is one of the most important monuments of colonial architecture São Paulo, built of rammed earth, rare remaining example in the city, last farm convent city. It was listed by the Historical and Artistic Heritage Institute National, in 1943, and the Council for the Defense of Heritage, Architectural artistic and the State of São Paulo, in 1979. It has much of its collection also listed by IPHAN, since 1969, whose priceless heritage includes relics of stories in Brazil and worldwide. The Museu de Arte Sacra de São Paulo holds a vast collection of works created between centuries 16 and 20, counting with rare specimens and significant. There are more than 10 thousand items in the collection. Has works of recognized names, as Frei Agostinho da Piedade, Frei Agostinho de Jesus, Antonio Francisco Lisboa, the "Aleijadinho" and Benedito Calixto de Jesus, Among many, anonymous or not. Noteworthy are also the collections of nativity scenes, silverware and jewelery, Lampadarios, furniture, altarpieces, altars, clothing, liturgical books and numismatic.